First impression says new KU OC Mike DeBord can do the job; but will he be allowed to? 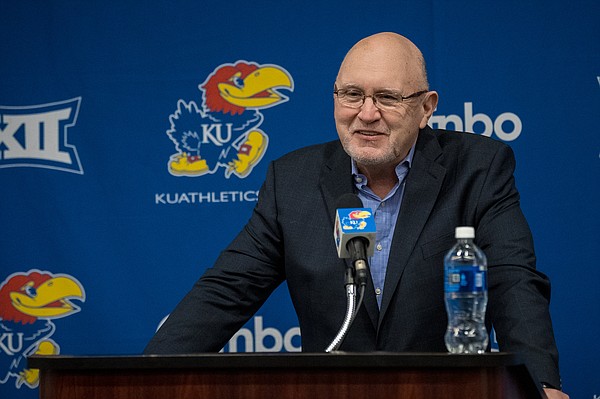 New Kansas offensive coordinator Mike DeBord recognizes the image projected by a little gray hair, a mostly bald head and a birthday in the 1950s.

But he’s pretty comfortable addressing it.

Speaking Wednesday on a Zoom call to introduce him as Les Miles’ newest hire, DeBord was asked whether his recent stop at Indiana (2017-18), another basketball school with winning football aspirations, had prepared him for the job he has now.

DeBord said he doesn’t view schools in terms of them being known for one sport or another. Rather, he looks at them through the lens of what they are today and what he can help them become.

He spoke of KU’s basketball tradition and how it can aid the football program’s rebuilding efforts. And he name dropped legendary Kansas basketball coach Phog Allen and James Naismith’s historic peach baskets.

First impressions are a lot like judging a book by its cover; they’re not always accurate and should be met with caution.

But the one DeBord made on Wednesday was much different than what Kansas fans might have expected from looking at an image of him in the newspaper or on the Internet.

Energized, excited and undeniably eager for his next challenge, the veteran college football assistant demonstrated with clarity that he knows how to command a room. Or is it a Zoom?

DeBord’s success at Kansas will be dependent on players, performance and progress, but one of the biggest factors will be how much control Miles allows him to have.

Based on DeBord’s introduction, there’s every reason to believe that Miles is ready and willing to let his new OC run things the way he sees fit.

But even if the third-year Kansas coach is not inclined to let go of the offense entirely, it sounds like the two coaches already are enough on the same page and have enough respect for one another to make that type of interaction matter less than it has in years past.

It’s easy for coaches to agree on the things they want an offense to accomplish in February. DeBord listed a few of them on Wednesday. Move the chains. Score a lot of points. Win time of possession. Take care of the football.

But it’s the way you get that done that matters. And DeBord has a plan for that, too.

He wants to install a “player friendly” system that is easy to learn and even easier to execute.

Miles and DeBord will collaborate. Others from the offensive coaching staff will have input, too. And Miles no doubt still will have some say in the way the Kansas offense runs.

But DeBord on Wednesday shared a key part of the framework for what that offense will look like and how it will be built.

“We’re going to put our best personnel out there to win football games,” he said. “Whatever that is.”

None of what DeBord said on Wednesday — or even how he said it — will win Kansas a football game or gain the Jayhawks a first down.

The hard work is just beginning in that area. And, like so many coaches who have come before him, on both sides of the ball, DeBord today only has a fraction of an understanding of how difficult this job truly is, even if he thinks he gets it.

The good news for Kansas fans is that DeBord has a plan and has been around some impressive programs and called games at the highest level of the sport. Put differently, he's a veteran with legit experience and a proven track record.

The better news is that his plan does not appear to be based solely on anything from his past, be it last year, three years before that or three decades earlier.

DeBord’s philosophy for building an offense is rooted in adaptation and open to fitting his offense to the personnel, not the personnel to the offense.

Despite his advanced age (he’ll turn 65 on Sunday) and the fact that his first college coaching gig came in the early days of the Reagan Administration, DeBord appears to be a coach who has grown with the game during all of his stops and years in the business.

“If you don’t change, you’re going to be left behind,” DeBord said Wednesday.

Miles believes he has brought the right man to town to help change the Kansas offense into something competitive. He said Wednesday that DeBord’s addition would make the KU program “much, much stronger.”

Heck, even Kansas City Chiefs coach Andy Reid — the gold standard of football coaching these days — provided KU with a glowing review of the new coordinator’s ability, saying DeBord has constructed “one dominant offense after another” everywhere he has been.

Whether he can keep that streak alive at Kansas remains to be seen. And it figures to be his toughest challenge yet.

Hey! For some people 65 might be an "advanced age." But not everyone. I am coming upon 74 in a couple of weeks and I am very physically active. At 65, even more so. Mike DeBord should have a few good years left in that "old" body! Besides, you don't get so much experience without putting in a little time.

Advanced age is better than outright calling the guy old, right? Saw plenty of that from KU fans yesterday, which was why I addressed it here. Not to mention the fact that he actually poked fun at himself about it with the Phog/peach baskets stuff.

Seems like a great guy, though. Should be fun to see what he brings.

Happy early birthday, by the way! Make it a great one!!!

Yes, the “old” stuff gets exhausting. So trite.

I didn’t see a walker or a caregiver spoon feeding him, so let’s just judge him on what he does. Nick Saban, by the way, is almost 70.

Leave it up to the mindless dolts to focus on age.

This was slightly referenced in the article. 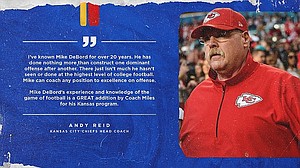 Am I reading between the lines too much to see Les meddling in the O last year? Probably can’t say that outright and keep a favorable spot in the zoom. Might explain some of Brent’s departure.

Seems like a convenient stretch to say he has a plan. Sounds more like a vacation “plan” of, Let’s start driving and see what we find. At 65 and all his experience, maybe that’s all he should show in an opening presser. Hopefully it helps that with Grimes, Les is getting a crew he’s more comfortable with.

Yep. Last year the Oline didn't know which way was up. I kept saying they didn't know the plays well enough to do them instictively. The line should be able to run the plays in their sleep.

So the hard part now is to simplify without becoming too predictable. If it were me I would find out what the players can do, what they are good at, and what they think they are good at, and then create a mix of plays from different sytems that are run from just a few lineups that complements their capability while putting the players in a position they like and can be successful at. Football should be fun.

One thing I like - -doesn't matter who said and yet if it was Coach DeBord love it. Not sure if it was him or you Matt but the simple phrase where it was said Coach fits his offense around his personnel NOT his Personnel around his offense - - -very solid I like that , that's how it should be - - -needs to be.

In reference to age I can see some of possible issues but not trying to be negative , just hoping he can still be able to inner act with younger kids make that connection. Hopefully The Mad Hatter has loose reins and let him give it a shot been around big time programs for sure - -ROCK CHALK ALL DAY LONG BABY

Spot on. If you don't have the best players in the country, you can only create success by putting your players into situations where they can win and overcome.