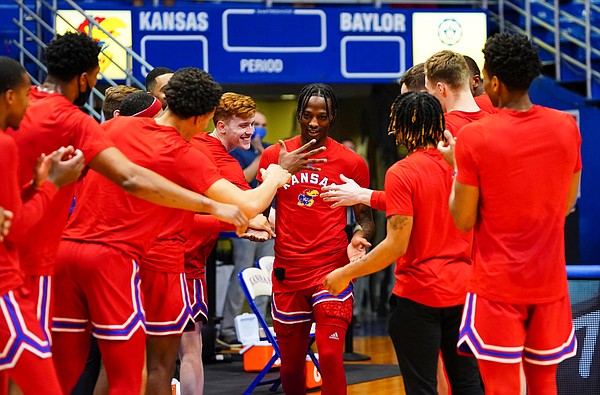 Technically, the Kansas men’s basketball team still has one game left in its regular season — 7 p.m. Thursday vs. UTEP — before the do-or-die days of March arrive.

But in the moments that followed Saturday night’s massive, 71-58 win over No. 2 Baylor at Allen Fieldhouse the Jayhawks did a bit of reflecting about their season to date.

And Kansas coach Bill Self was in no mood to hold anything back in terms of praising the way his team fought through adversity, battled a mid-season slump and figured out how to play its best basketball at the end of the season.

“I don’t think one game validates the season,” Self said. “But we finished 12-6 in a ridiculously hard league and we sucked for three weeks. So, if you take those three weeks out of it we've performed pretty consistently. … There’s a lot of teams across America that would love to be 12-6 in arguably the toughest conference in America.”

Don’t look now, but what was widely considered to be a down year for the Jayhawks for several weeks has turned into a pretty memorable season with KU putting together a résumé that ranks up there with some of the best in college basketball.

No team has more wins over ranked teams (6) than the Jayhawks, who are now 18-8 overall and winners of six of their last seven games, with the only loss in that stretch (since Feb. 8) coming at No. 14 Texas in overtime.

No team has played more Quadrant 1 games than Kansas, which is 6-8 in those games and now up to No. 11 in the NET rankings. KU was No. 17 prior to the win over Baylor.

Add to that the fact that ESPN Bracketologist Joe Lunardi now has KU on the 3 seed line and you’re clearly looking at a team trending in the right direction. With the potential for a few more Q1 games awaiting in the Big 12 tournament, the Jayhawks could see their NCAA Tournament seed climb even higher if they can continue their winning ways.

Perhaps more important than any of that is the fact that very few teams were able to play this season’s schedule, from start to finish, without any self-induced COVID-19 delays the way Kansas has.

“The players have handled everything great,” Self said after Saturday’s win. “We did hit the bump in the road in January. We went through that period of time where we played with no energy and were duds. Somehow, they kind of responded and got their legs back, and we’ve been pretty good since.”

Pretty good might be putting it mildly. The Kansas defense, which has carried this team since the start of February, has been sensational, limiting opponents to both low point totals and low points-per-possession marks.

The crown jewel of that came Saturday night, when the Kansas defense held unbeaten Baylor to just 58 points, .94 points per possession and some of its most atrocious shooting percentages of the season — 35% overall, 23% from 3-point range and 38% at the free throw line.

It’s worth pointing out that those numbers came against a Baylor team that, even after that off night, ranks fourth in KenPom.com’s adjusted offensive efficiency numbers. Shutting them down, COVID pause or not, was a significant accomplishment. And it’s one that has Self and his players believing that if they can stick to the old defense-wins mindset, they can finish the season with a deep tournament run.

“I’m proud of our guys,” Self said. “I think we’re playing better than we have. We’ve had a lot of teams that had better records going into postseason, but they may not have been kind of on an uptick. I think this team’s on an uptick.”

Great to see so much improvement - not only in D, but the way our team also scoring, FTs, rebounds. What will limit us to march deeper in tourney will be teams that can defend inside the perimeter well - we emphasize too much on one on one drives, and post. We don't have consistent 3pt shooters. If we look at other teams that make it to the tourney, they're loaded with 3pt shooters. Most of them can light up from downtown. That's what scary.

But I'm happy enough to see us made it this far. Without a star power, as a collective of great individuals who just want to play better as a team, I think this is a heck of a Jayhawk team to beat. We'll be able to compete just about any ranked team in the country right now.

Your title with the word 'postseason', already got me excited thinking what's coming in 21/22 season. I think we'll see lots of highlights next season. Not only high hopes as in this season. :) ROCK CHALK!!!!!

ps: Y'all should watch this:

If he's groomed right, given the right plays, he'll be a rising star.. I could only find one article in kusports.com about his commitment. I think a lot of people haven't seen him yet. B12 better watch out!!! KU will be jamming again next season!!!!

That was the best college announcement video I have ever seen. This kid is so real, grounded, motivated, and talented. I can see why Coach Self wanted him at Kansas.

I have to agree Dan. Looking forward to watching this kid play ball in Lawrence. Steve, appreciate the link. It’s well worth the ~17 minutes to watch.

Matt - As we approach the end of the season, the best I can tell the other teams in the league appear to have missed 17 games. I’m seeing 10 being made up this coming week, which would mean 7 aren’t going to be made up. The Big12 office apparently decided WVU at BU was one that could skipped. Do you know what 6 other games were deleted? WVU at BU would seem significant at deciding the league championship. Makes me wonder what the others are and how much impact they would have on the championship.

They should have played WV at BU, TX at BU, BU @ OU to gauge where the top of the Big 12 is really at currently.

While I agree that they should have, there just isn't enough time to get them all in. Baylor is already playing WVU, OSU, and TT this week as make up games so short of making them play 6 games in 7 days, it's just not something that could happen. What I don't understand is why they cancelled the original WVU scheduled game in Waco. They said it wasn't for COVID reasons and it was 2 days before they played KU so I'd be curious to understand why it was cancelled. That was their opportunity to get the top 2 teams to play twice.

Dirk raises a great question that would be a worthy topic to write about. The key games that Covid19 cancelled. Start with Gonzaga versus Baylor, but really focus on the cancelled B12 conference games that could have had significant impact on the standings, NCAA seeding, and overall B12 resume.

The word "consistency" is not operable here for our beloved Jayhawks just yet even taking out the 3 week down period. Individually and as a team, we have epitomized INconsistnecy.
No question, we are TRENDING in the right direction, but it only takes one bad game in the next 2 tourneys and it's over. The 2nd half and OT against Texas was just one game away and we stunk it up after such a stellar first half. BTW, I`m a big Bill Self fan and I know many have dissed him for various deficiencies and failings this season, but I think he has handled it beautifully. I especially appreciate the compassion he has had for the players who have been cut off and shut down from the outside world and deprived from many of the joys of being a college student. This team is coming together and hopefully, there is still time to do something special and make a statement as expected from this [program. Rock Chalk!

I admire coach BS (I admit I've been one of those who are very critical of his oldie methods) for "compassion", add to that also: "trust" and "confidence" he has on key players. You won't get that quality from coach K.

I've known Scott Drew since he was about a month old--taught at high school where Homer started his career as an assist. coach (Lafayette HS outside of St Louis); Homer's a great guy; Scott not so much. I got first peek into his character when Embid played for KU; we'd gone to Texas as first of two-games in that state, and Texas goaded Embid into losing his temper and getting ejected; next game was Baylor and right off the opening tip their center tried to get Embid to lose his temper and be removed; it didn't work but the fact that Drew thought that was the way to win a game told me all I needed to know about the man he'd become. And, then, after losing this game his comments were almost all about how rusty they were and how not back from COVID they were blah blah; poor sport, missing important elements in his character.

@Ted - Thanks for digging up the missed games.

@Shannon - I think I read an article that said the reason given by the conference was so that no team would have to play 3 games/week for 3 weeks in a row, which of course assumes that BU would have been in the conference tourney championship game.

Remember when the conference first championed the phrase - Where every game matters. IIRC, it didn’t even matter for the 1st or 2nd football championship game, and this version is laughable.