Kansas basketball coach Bill Self confident season will continue; says patience and 'scrambling' may be necessary 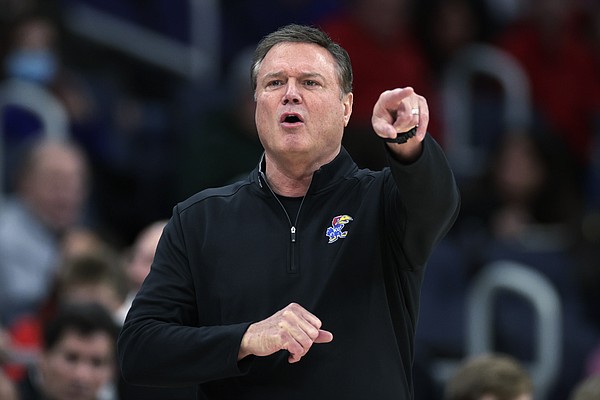 You don’t earn an induction into the Naismith Memorial Basketball Hall of Fame without being able to think ahead a little bit.

Kansas basketball coach Bill Self showed recently that his ability to do just that extends beyond anticipating an in-game adjustment or tweaking the scouting report.

He also can use the skill to his advantage when it comes to KU’s schedule.

Speaking on his weekly “Hawk Talk” radio show on Monday night, Self explained to listeners that he actually anticipated the cancellation of the Harvard game and had developed a plan to combat it.

It involved a rematch with Stephen F. Austin and, according to Self, the game had been agreed to by both Self and longtime friend and SFA coach Kyle Keller.

“I saw their (Thursday) game (vs. Rio Grande Valley) was already canceled and I said to him, ‘If ours (vs. Harvard) is canceled, why don’t we just play again?’ He agreed to it.”

Everything was in place for a fairly easy transition and when Harvard pulled out of the game on Sunday night, Self called Keller and told him the game was on. There was, however, one problem. Keller’s SFA squad had experienced a positive COVID-19 test of its own, forcing the Lumberjacks to shut down for a few days and making a return trip to Allen Fieldhouse impossible to execute.

From there, KU administrator Sean Lester moved quickly to identify Nevada as an option — “scrambling around” was the way Self worded it — and the two schools moved forward with hammering out the details of the game, which will take place at 7 p.m. Wednesday night at Allen Fieldhouse.

Self said finding pilots and a crew to fly the Wolf Pack in was the biggest obstacle, but once they did, Nevada was scheduled for a Tuesday arrival ahead of Wednesday’s contest.

The sixth-ranked Jayhawks (9-1) returned from a four-day holiday break on Sunday and practiced once Sunday night and twice on Monday.

Self did not reveal whether the Jayhawks all tested for COVID upon their return but he did indicate that most college programs, including KU, were testing only when symptoms were present.

“It’s different with the big boys and how they do it,” Self said of testing protocols with professional teams. “A lot of (universities) are testing whenever you have symptoms or you test the unvaccinated or unboostered. Fortunately for us, we’ve had good success there. When you have symptoms you have to get tested. We had six of us, including myself, who all had symptoms two weeks ago. (All six) tested (positive) for the flu. Nobody tested obviously for the variant or COVID. It’s a different protocol. If you have the flu you are out 48 hours. You can’t have a fever (and return).”

Self expressed confidence in the fact that the Jayhawks season would remain in tact even if it requires some creative scheduling and patience.

“We’re going to have a season,” he said. “It’s just going to be kind of messy for the next three to four weeks probably. I really think by the end of January this will all even out and we’ll have a pretty regular season. It’s just going to be uncomfortable for the next month, in my opinion. It could be longer. The way this thing (variant) is spreading, I’d be surprised if not too many don’t have it or haven’t had it by February.”

As for filling the hole left by the cancellation of the Colorado game on Dec. 21 that started the wild stretch of scheduling adjustments, Self said the Jayhawks could find another opponent to fill that slot if more cancellations take place during the Big 12 season, leaving the Jayhawks with a single game or less during any given week.

The new game, if it happens, will not be against Colorado and likely will be the result of the same type of “scrambling around” that Lester and the KU program did this week to land Nevada. In all likelihood, any added games from this point forward would take place at Allen Fieldhouse.

“It’d be a home game and a bonus game, so to speak,” Self said Monday night. “If it’s best for our team, we’ll try to do so. If there are no cancellations the rest of the way that game will not be replaced. I’m not going to play three games in one week just to get in another game.”

Just like last year, if the policies create wonky situations, they’ll change the policies. Maybe as early as February. The show must go on.

The courts have already ruled I several cases that the mandates are not legal. Guessing those policies will also change as more people opt out, and as 100% vaccinated naval ships have outbreaks that shed more light on the emperor’s new clothes.