Brian Hanni's new children's book on Dr. James Naismith to be featured at 2 events this weekend 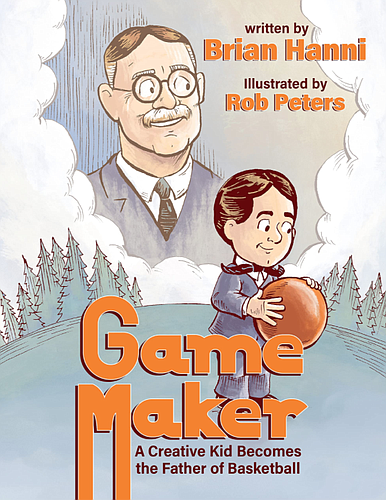 Saturday’s Kansas basketball game against Stephen F. Austin will feature an added element that very few places in the country can say they’ve had.

Jim Naismith, the grandson of Dr. James Naismith, the inventor of basketball, will be in attendance, both rooting on the Jayhawks and promoting a recent project.

Jim Naismith joined KU play-by-play announcer Brian Hanni to bring to life the children’s book, “Game Maker,” which honors Jim’s grandfather and the story of the invention of the game.

The two will be signing copies of the book before Saturday’s game, from 5:30 to 6:30 p.m. at Rally House on the second floor of Allen Fieldhouse. That will come one day after Hanni and basketball’s most notable grandson will host an event from 4-6 p.m. on Friday at Rally House across from Oak Park Mall in Lenexa, with 30 books being donated to children through the Boys and Girls Club of Kansas City.

At first, the book was a COVID time killer, as Hanni dabbled with writing it as a way to pass the time when the sports world shut down in 2020. But one thing led to another, the right people caught wind of it and, before he knew it, there were plans to print it and market it to children nationwide.

“I’m so glad we did it,” Hanni said. “As I’ve gotten to know the family, I’ve sensed that the book really honors who Dr. Naismith was and his legacy and how he’d want his story to be told.”

Appropriately, the book launch took place in Springfield, Mass., back in September, during Hall of Fame weekend at the Naismith Memorial Basketball Hall of Fame.

From there, the book has traveled and been sold all across the country, with events taking place in Lawrence, Wichita and Kansas City and plans for more when March Madness rolls around. They’re even selling books in Dr. Naismith’s hometown of Almonte in Ontario, Canada.

“It’s been so cool to hear Jim tell the kids that if his grandfather were still here he wouldn’t be rubbing elbows with Michael Jordan, he’d be right there with those kids, helping them and creating opportunities for them in life, physical education and other areas,” Hanni said. “The more we got into the book, the more I saw that this was the right project because Dr. Naismith was all about providing opportunities for kids and empowering them.”

Hanni said the book sold very well in the summer months and still remains a hot item heading toward Christmas. The No. 1 place to purchase it is still at Amazon.com, but he’s hoping to add options on that front in the near future.

The greatest reception, Hanni said, has been closest to Lawrence. But he said he was very proud of the fact that the 32-page book and 10-minute read that is being marketed to children ages 4-12 has a national appeal.

“The beauty of this book is that it’s not just a Kansas Jayhawk book,” Hanni said. “It certainly has some Kansas Jayhawks flavor, but this is a book that I hope will reach the masses, not just nationwide but internationally, too. It’s been an incredibly rewarding experience for me to see the reception the book’s gotten and also to develop such a great relationship with the Naismith family through this project.”

Out since September and only 10 reviews on Amazon?

They are all 5 stars at least.