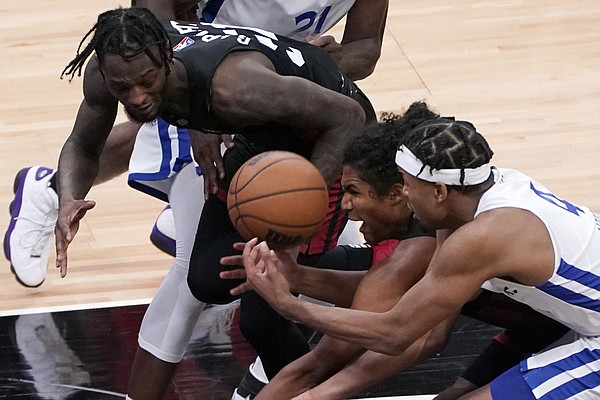 A pair of former Jayhawks who made a career out of making big plays during their time in Lawrence are now doing the same thing at the NBA’s Summer League in Las Vegas.

Miami’s Marcus Garrett and Utah’s Udoka Azubuike have been two of the bigger stories with their respective squads in the early days of the annual summer showcase.

And both have become that by doing the things that made them household college basketball names at Kansas.

For Garrett, that means stellar defense. And what he’s done for the Heat so far this summer has been off the charts even by Garrett’s lofty standards.

Whether it’s a clean pick at halfcourt that leads to an easy layup on the other end or a hustle play after a deflection on defense that gets the break started for his teammates, Garrett has shown a willingness to do anything and everything his team needs so far this summer.

Consider his blazing start as evidence of just how hot Garrett has been with the Heat.

In his first game with the club, last week in Sacramento, Garrett swiped six steals. One night later, he dropped a double-double of 11 points and 10 rebounds and added three assists and four more steals. Not bad for a player who went unselected in last month’s NBA draft.

Garrett’s name came up in Lawrence last week, when new Heat forward Markieff Morris was in town last week for the Rock Chalk Roundball Classic. After dropping 21 points on seven 3-pointers in the annual charity game, Morris was asked about his new team and opportunity.

The follow up question was simple: Does Marcus Garrett fit into that?

“Hell yeah,” Morris said. “Have you seen him in Summer League?”

Obviously, Morris had. And now that several others have, as well, there is a growing sense that Garrett has a real shot of making the NBA roster.

After going undrafted on July 29, Garrett signed an Exhibit 10 contract with the franchise the next day. The contract guarantees nothing but can be converted into a two-way deal with Miami and its G League affiliate.

If Garrett keeps going at this pace, other options might even surpass that.

As for Azubuike, he also is doing the things that made him a fan favorite at Kansas this summer — dominating down low and putting up big time numbers.

Azubuike had 19 points and 11 rebounds in the Utah Jazz White Team’s 94-75 victory over the Memphis Grizzlies last week. He hit all nine of his field goal attempts and was 1-of-2 from the free line with three blocks.

The 21-year-old who averaged 3.8 minutes a game in 15 games for Utah during an injury-plagued rookie season last season, also tallied eight points and 14 rebounds in another recent Summer League game.

Azubuike, who as a first-round pick by the Jazz in 2020, has the inside track on Garrett to earning a roster spot. But both have gotten off to the kinds of starts that might make them factors next fall. 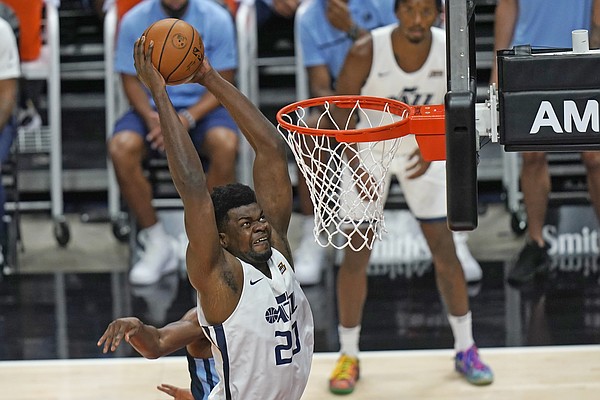 Utah Jazz's Udoka Azubuike (20) dunks against the Memphis Grizzlies during the first half of an NBA summer league basketball game Wednesday, Aug. 4, 2021, in Salt Lake City. by AP Photo/Rick Bowmer

Thanks for the update. I've been wondering how Marcus is doing in summer league

Reading about this is bittersweet, because it's such a reminder of what might have been in 2020. Man, that team was good! And they were peaking at the perfect time.

I'll never quite get over missing out on that, and I can only imagine how the players feel about it.

My gosh, look at the face Dok is making while dunking that ball. He looks like one of those angry tiki masks. Absolutely nasty!

I heard about the 6 steal starter, but even better that he’s continuing. It would seem to me that his game translates to the nba, as long as you’re not expecting him to be a dominant scorer. It seems that there usually only two or three big scorers per team and the others are role players. He’ll do that exceptionally well on multiple fronts and score just enough to keep the opponents honest.

Dok will need to be in top shape to play in the NBA. MG has the best shot to play, but he has to be a consistent shut down defense player. The Heat can score. If MG can shut down guards on the Nets, Bucks, and Hawks, he has a 6th man or Defensive player of the year award in his future.