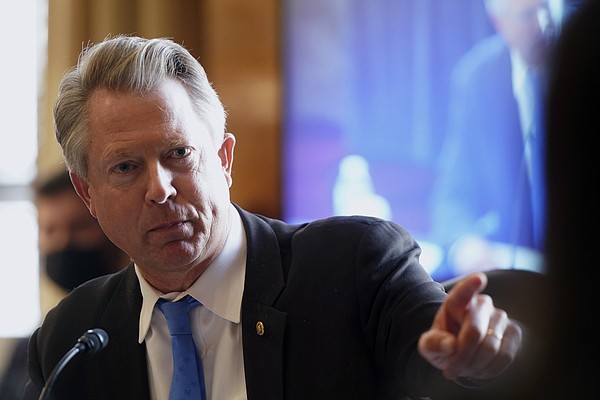 Sen. Roger Marshall, R-Kan., speaks during a Senate Committee on Energy and Natural Resources hearing on the nomination of Rep. Debra Haaland, D-N.M., to be Secretary of the Interior on Capitol Hill in Washington, Wednesday, Feb. 24, 2021. by Leigh Vogel/Pool via AP

In a formal letter addressed to Garland, Marshall asked for the Department of Justice to look into ESPN’s role, if any, in Oklahoma and Texas leaving the Big 12 for the SEC.

“I write today to ask that the DOJ investigate ESPN’s role in the potential destruction of the Big 12 Conference and if any anti-competitive or illegal behavior occurred relating to manipulating the conference change or ESPN’s contractual television rights,” Marshall wrote, according to published reports of the letter.

In the letter, Marshall, who has degrees from both KU and Kansas State, cited a recent claim from Big 12 Commissioner Bob Bowlsby that the Big 12 has “evidence that ESPN was manipulating all of this.”

ESPN’s role in this round of conference realignment has become a hot topic of late. The network currently is one of two major television partners with the Big 12 Conference. But that contract, which Oklahoma and Texas announced they would not renew, is scheduled to expire in 2025.

The end of the contract and the conference’s grant of rights, along with OU and UT declining to extend the agreement and instead head to the SEC, figures to put the future of the Big 12 in jeopardy.

Last week, Bowlsby sent a cease-and-desist letter to ESPN and accused the network of soliciting the help of at least one other conference — believed by many to be the American Athletic Conference — in trying to break up the Big 12.

A day later, ESPN responded by saying Bowlsby’s claims had no merit.

Earlier this week, Bowlsby promised to do his part to put an end to the public back-and-forth claims between the Big 12 and ESPN. “We have agreed to not escalate this publicly,” Bowlsby said. “It’s in neither party’s best interest to do so.”

Marshall’s letter, written on United States Senate letterhead, is dated Aug. 4, 2021 and was sent to directly to Garland. 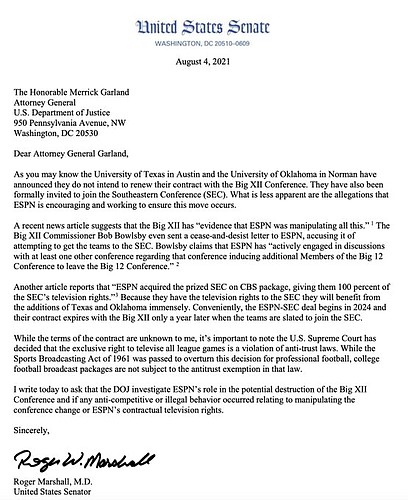 U.S. senator Roger Marshall's letter to the U.S. attorney general asking for an investigation into ESPN's role in conference realignment. by Matt Tait

Roger Marshall is one of the most disgusting human beings on this planet. He needs to shut up. We don’t need posturing and worthless showboating from this spineless pile.

Indeed... Marshall is a quack as well as a seditionist.

With all the talk about TV$, isn’t it true that for the Big12 it doesn’t include tier3 $, which for KU is a good chunk of $?

Didn’t realize that ut’s budget was north of $200M. And for all the “football drives realignment” talk, it’s good to realize that KU is the #3 budget in the conference even with the football program in a decade of chaos. (Really could skip saying decade.)

Bowlsby’s comments about ESPN having done this before refers to them “encouraging” the ACC to pillage the Big East of Miami, VTech and Boston College in 2004-05.

I think we can all agree that they absolutely did this again with OU and Texas. But I have no idea how Horse Teeth… sorry, Sen. Marshall intends to prove it. I see this as a waste of time and resources.

Marshall - the quackster showboater - should stop being lazy and propose anti-trust action against the Disney Corporation.

In related news - SEC commissioner Greg Sankey has agreed to a contract extension that will keep him with the conference through 2026. He should be there to welcome their 2 newest schools to the conference.

So everyone wins in the SEC!

Unless your not in the SEC.

This still leaves a lot of questions going. The key is if Fox still wants to play in the college football arena. They basically had the Big 12 and limited games from other conferences. If they want to continue, they will bid for the PAC and capture many of the Big 12 teams to enhance time zones. If they let ESPN/ABC own all of the games, then we will see some dwindling interest from a lot of the teams and SEC will basically own the NFL junior league.

I personally hope that the Big Ten adds KU and BYU.

I hope that the ACC would add ND and WVU (although KU could be an option here too).

I hope that the PAC adds 4.

I believe that leaves two schools in the wind. Likely KState and Iowa State would be in the uphill battle, because TX/OSU would be appealing to the PAC.

I still think that the BigTen could go after USC and UCLA and really send this into a conference realignment quagmire.

I see none of your suggestions being a question.

ACC stated yesterday they are not talking about changing anything

The B10 will never add just KU and BYU. not even a question think of it as a fact

PAC 4 not a question. A 2-division split adding all 7 leftovers and maybe BYU works and gets the P12 in the CT.

KState and Iowa state will be part of a PAC deal or every school will be left up in the air.
B10 will never add 2 cross country trips to a smaller market than ET or CT. Sure, LA would be a nice market but it throws their entire conference out of balance. It Makes No Sense for the B10 to do this. I live in B10 country they are not talking about adding schools. No one is talking about UCLA/USC.

We need to go as a group to the P12, or else its every school for themselves and a very remote chance only of the only Leftovers land in a Power conference.

Roger Marshall needs to shut his trap and keep his nose out of things that do not concern him. If he was doing his job instead of trying to fiddle with the Conference fates of both KU and K-State the world would be a better place. This is none of his business.

The Big 10 would never be interested in BYU for any number of reasons. They are VERY Church specific, out of the Footprint, Parochial, too far west, failures at gaining entry in the PAC and Big 12,out of touch with modern realities, living in the 19th Century, I could go on. But not necessary. If the BIG wants a western anchor Colorado would be a much likelier candidate.