Realignment Today: All eyes on the Pac-12 for the rest of the week, even if the conference deciding to expand is highly unlikely 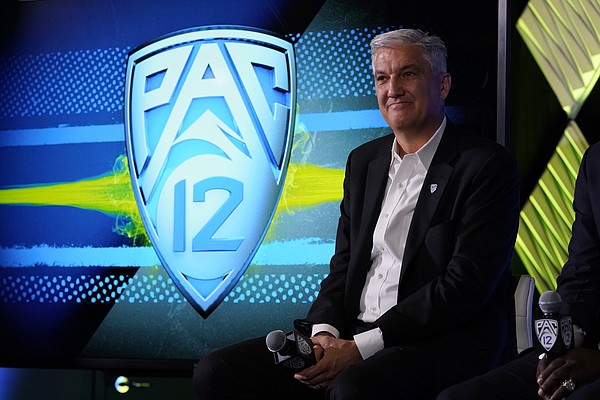 From the moment Oklahoma and Texas first announced that they were leaving the Big 12 Conference for the greener bank accounts, I mean pastures, of the SEC, a huge chunk of the Kansas fan base immediately put its focus on KU’s chances of joining the Big Ten.

While that may still be the most desired outcome — if it’s even possible — it’s another of the remaining power five conferences that bears watching this week.

Shortly after yesterday’s groundbreaking announcement of the alliance between the ACC, Big Ten and Pac-12, Pac-12 Commissioner George Kliavkoff told multiple media outlets that the Pac-12 would announce by the end of the week whether it intends to expand.

The fact that there’s such a quick turnaround on that answer leads me to believe that we’re simply waiting for a no.

But in these uncertain times, the mere fact that one of the conferences out there that could provide a lifeline to at least some of the remaining eight Big 12 schools who have no idea what their future holds means it’s worth tracking.

Shortly before the newly announced three-way alliance became a thing, Big 12 Commissioner Bob Bowlsby and Kliavkoff met to discuss the current landscape of college athletics. The hope then, among fans of the Big 12, was that those two conferences would form some kind of partnership. It never happened. And now the Big 12 has been left out of the alliance altogether.

Still, Kliavkoff seems like a leader who has his head on straight and he also appears to be genuinely exploring all kinds of options for the good of the Pac-12, possible expansion being one of them.

Earlier this month, he told the Las Vegas Review-Journal the following:

“I am not actively poaching any school or convincing anyone to leave their existing conference, but I wouldn't be doing my job if I wasn't listening to schools that wanted to go in the Pac-12. And we've had a lot of them reach out. Probably all of the ones you would expect and several you'd be surprised by."

As already mentioned, the smart money this week is on hearing that the Pac-12 has no intention of adding any schools to its conference at this time. Saying anything else would seem to run counter to the whole point of announcing the big alliance on Tuesday.

But just because the Pac-12 says no today — if that’s in fact how it goes down — does not mean it is etched in stone forever and can never change. Same goes for the Big Ten or the ACC, for that matter.

If we’ve learned anything during the past decade, and, more specifically in the past couple of years and months, it’s that things are ever-changing in the world of college athletics and today’s stability is only as good as tomorrow’s actions.

Kansas to the Pac-12 remains way far down on my list of likely outcomes for the Jayhawks when all of this is settled. But it certainly doesn’t hurt any of the Big 12 schools searching for hope to know that at least one of the power conferences is entertaining the idea of expansion as we speak.

There is a legal problem with the other Big12 teams getting into the PAC. It is complicated but it involves California Anti Discrimination law and it is in the State Constitution (I voted yes) and the AG of California is making this harder to circumvent. It is a wildly popular set of Laws. 17 States are on the forbidden list. KS, OK, TEX, and IA are all States with "Religious Freedom Acts" that California forbids all State-supported agencies from doing business with, Including the UCAL and CAL STATE Systems. They may use Private donations but it may not be a good thing to try and circumvent a popular set of laws. Washington and Oregon are debating similar measures. Discrimination of anyone on any basis is a big thing on the Left Coast. It is not popular at all. So KSU, OSU, TTU might find themselves out. All it will take is one Blackball from one University President and it is over. I attempted to talk with friends of mine at Berkley.4 years ago about why they could not play KU in Basketball. That was the answer they gave. Cal would be the likely source of a Blackball. Oregon and Washington may be other best bets. Not trying to throw a wet blanket on anyone's hopes but this is a reality that any member of the PAC has to learn to live with. They already have 3 Universities lined up for membership anyway. SDSU, Nevada, and UNLV are all in line. So better all know what the hazards are in the PAC than be completely ignorant. Plus they do not take in Fundie Religious Schools that discriminate against LGBT People so Baylor is out, for the same reason they have rejected BYU for so many years. TCU being a Private University may have the best chance. Better you know there are multiple roadblocks in the way than have folks trip on them and get hurt. And please don't shoot the messenger. Shoot Sam Brownback for ramming this odious law through the Legislature in 2013.

Is Stanford not subject to that CA law? KSU is playing Stanford, in Texas, soon. I'm also in CA but am new enough to not really be very familiar with that law.

Let us keep our fingers crossed for the BIG.

No question. Thanks for the info, Vern. I don't know the ins and outs of all of it, but money talks so I'm sure there's always a way around things like that. But they may not be easy or even all that likely. As it stands, that seems to be a huge obstacle, which doesn't necessarily hurt KU as much as it might hurt some other Big 12 schools who have higher hopes of a Pac-12 landing spot... TBD.

For selfish reasons, KU to the Pac would be my dream result. Living in Phoenix, I've gone to every game KU has played at ASU. Bottom line, Kansas fans outnumber Sun Devil fans at those games. Tucson would not be far at all and neither would USC and UCLA games..... Go KU! KU to the Pac 12...you heard it here first! :)

The PAC 12 would hope to get KU. I think KU is the one school that is actually sought after in the remaining 8.

I still foresee the PAC Going towards Texas schools and OSU in their alignment.

KU has three options and the PAC 12 should be the last of the 3.