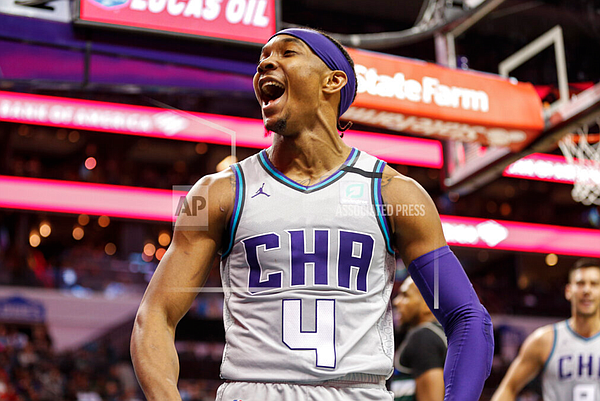 Charlotte Hornets guard Devonte' Graham reacts after scoring against the Milwaukee Bucks in the second half of an NBA basketball game in Charlotte, N.C., Sunday, March 1, 2020. (AP Photo/Nell Redmond) by Matt Tait

The hits just keep on coming for former University of Kansas point guard Devonte’ Graham, who this week saw another NBA superstar sing his praises.

Roughly a month after Dallas guard Luka Doncic claimed that Graham deserved his spot on the list of finalists for the NBA’s Most Improved Player award, injured Brooklyn Nets star Kevin Durant took it a step further, saying that Graham was on the path of becoming a force in the NBA.

The kind words came during Durant’s appearance on The Old Man and the Three podcast, co-hosted by NBA veteran JJ Redick and Tommy Alter, which might be the best-named podcast in the history of podcasts.

The question to Durant was simple: “Who are some of the young guys this year, when you’ve been watching, that maybe you have played against once or haven’t even played against at all that have just impressed you?”

The first name out of his mouth was Graham’s.

“Devonte’ Graham impressed me,” Durant said. “Just to see his ascent to where he is. I mean, I didn’t think he would be in the league, to be honest, when he was at Kansas. And to see where he is right now, he’s developing into a really nice player.”

Graham, of course, broke onto the NBA scene in his second season with the Charlotte Hornets by improving his numbers dramatically across the board and averaging 18.2 points, 7.5 assists and 3.4 rebounds per game. He became a bona fide weapon and go-to scorer for the Hornets while starting 53 of 63 games during the pandemic-shortened 2019-20 season.

Graham’s play earned him a role in the NBA’s All-Star Weekend and, last month, he also won the Rock Chalk Roundball Classic’s “Shooting for the Stars” 3-point shootout that featured 10 of the 12 best 3-point shooters in KU history.

Durant also mentioned Zach LaVine and Dallas big man Kristaps Porzingis as the two other lesser-known players who most impressed him during the 2020-21 season.

“Those three guys are dudes I’ve been following throughout the year,” Durant said. “And I have really been trying to watch their progression because they’re going to be some forces going forward.”

It would be interesting to hear more of why Durant didn’t think Devonte would make it in the nba when he was at KU.