Report: KU-Gonzaga in the works for November 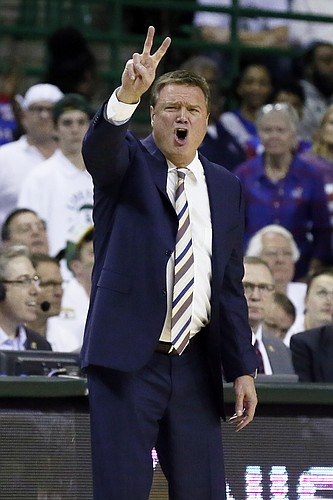 Kansas head coach Bill Self calls a play from the bench against Baylor during the second half of an NCAA college basketball game on Saturday, Feb. 22, 2020, in Waco, Texas. (AP Photo/Ray Carlin) by Associated Press

A matchup that Kansas basketball fans have been intrigued by for years may be just a few weeks away from happening.

KU officials would not confirm anything about a possible KU-Gonzaga matchup as of 11:20 a.m. Tuesday morning.

The matchup, if it happens, would take place on the first day the NCAA has allowed games to be played, and, according to Norlander, would be a part of a four-team event that also would include Auburn and a team that has not yet been determined. CBS's Jon Rothstein reported the Gonzaga/Auburn involvement in a Fort Myers event late Monday night.

Auburn and the fourth program also would play on Nov. 25 and and Kansas would play the fourth team on Nov. 27, when Gonzaga and Auburn would square off.

The two games in Fort Myers would leave Kansas looking for one more nonconference game to fill out its 2020-21 schedule.

KU released all but three games of its 2020-21 schedule on Monday.

Fort Myers is no stranger to hosting college basketball games, launching the Fort Myers Tip-Off in 2018. Games for that event have been played at Suncoast Credit Union Arena, the home of Florida SouthWestern State College.

Kansas State, Pitt, Bradley and Northwestern competed in the Fort Myers Tip-Off in 2019, and the field for that event in 2020 was originally scheduled to include Butler, Colorado, South Florida and Wisconsin.

HUGE matchup in the works for opening night of CBB, sources tell CBS Sports: Kansas vs Gonzaga on Nov. 25 in Fort Myers. Auburn is also in this MTE. Fourth team is to-be-determined, but plan is then Auburn-Gonzaga would play Nov. 27, with Kansas playing TBD team that date too.