Jayhawks still just scratching the surface of what's possible with 5-guard lineups, but they like what they see so far 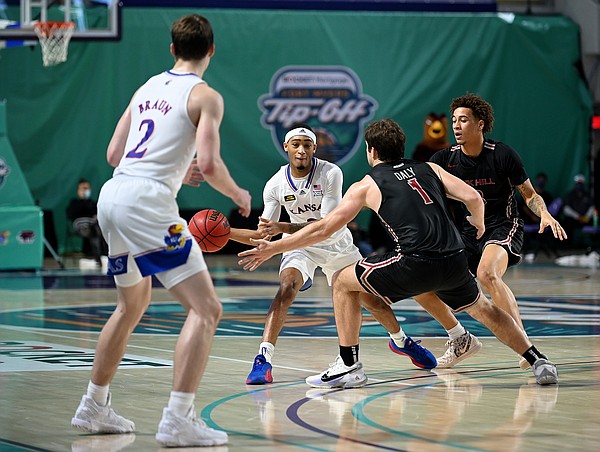 Kansas redshirt freshman Dajuan Harris fires a pass to sophomore Christian Braun during a game against Saint Joseph's on Friday Nov. 27, 2020. The Jayhawks earned a 94-72 win over the Hawks in the Rocket Mortgage Fort Myers Tip-Off at the Suncoast Credit Union Arena in Fort Myers, Florida. by Photo by Chris Tilley

With junior forward David McCormack struggling for the second game in a row, sixth-ranked Kansas went to a five-guard lineup early in the second half against Saint Joseph’s on Friday in Fort Myers, Fla.

And the Jayhawks never went back.

After the game — a 94-72 Kansas victory that was fueled by the fast and free play of the KU guards — coach Bill Self and sophomore guard Christian Braun explained how the team still was going to need McCormack a lot this season, particularly in Big 12 play where bigger teams await.

But sprinkled among those moments of bigger lineups in the future was talk about just how dynamic the Jayhawks’ five-guard attack could be.

“It put them in a different mode,” Saint Joseph’s coach Billy Lange said after the game.

Sparked by Dajuan Harris’ pesky defense and precision passing, the Jayhawks ran past the Hawks in the second half, outscoring SJU 50-36.

That came after the first 117 seconds, when either McCormack or Mitch Lightfoot was still on the floor. And it came after the Hawks used a 10-0 run to open the half and take a two-point lead.

Enter Tristan Enaruna for Lightfoot at the 18:03 mark. Forty-three seconds later, Enaruna hit one of the toughest shots of the day to tie the game at 46 and the all-guard gang was on its way.

For that stretch, it was Enaruna teaming with Marcus Garrett, Ochai Agbaji, Jalen Wilson and Christian Braun.

After Kansas had reclaimed a 50-49 lead, on a step-back jumper by Enaruna, Harris checked in for Garrett and joined Braun, Agbaji, Wilson and Enaruna for the next three minutes of game time.

That was the start of things coming together on the floor for the faster, smaller Kansas lineup. It really took off a couple of minutes later, when Garrett checked in for Enaruna at the 12:48 mark, with Kansas leading 56-53.

From there, the fivesome of Harris, Garrett, Agbaji, Braun and Wilson unleashed a 21-6 run that eventually ballooned to 29-12, turning a three-point game into a 20-point runaway in the span 9:10.

“I think that the five-guard lineup really helped us just because you get to play free and then there's a lot of guys moving,” Braun said.

Added Self: “Considering how much we’ve practiced it, I thought it was pretty good. I thought the ball moved pretty well, I thought that we shared it for the most part, and we drove and had some lanes to drive it.”

While the Jayhawks now have success with the lineup to draw on, Self said he was eager to spend more time fine-tuning it.

The KU coach said KU’s offensive spacing was not always great with five guards on the floor against Saint Joseph's and he noted that a few guys were still trying to figure out on the fly where to be and when.

Both things, Self added, were easily correctable.

Confidence with the look does not appear to be an issue. The big challenge from here is for both the players and coaches to commit to the philosophy and to be ready to use it whenever it fits the opponent.

“We’ve got to come up with some sets that we can run, playing small, which right now we really don't have,” Self said. “Jalen has got to know all the 5 spot or Christian’s got to know the plays from 3 spot or from the 4 spot and we really haven't practiced that much. So hopefully we can do some things in the next couple of days to allow us to maybe have some crutches to go to when we play small again.”

While those were the benefits of the all-guard approach for the KU offense, its impact on the defensive end was just as important, if not more so, given St. Joe’s lack of size and desire to bomb away from the outside 37 times.

“Our versatility is great,” Braun said, noting that he, Wilson and Enaruna could all guard all five positions on the floor when teams play small. “Teams like that are tough to guard when they have five guards on the perimeter that can all shoot. So we struggled a little bit the first half just getting to shooters. But I like that we’ve got guys like Jalen, who’s tough, Tristan is tough, guys that are long you know that can guard on the perimeter. … “Just being able to guard every different lineup (is great).”

And St. Joe's was small.... Nice win and looking forward to watching this team develop.

StJoe's was small, true. But yet we labored throughout the game, until DJ took control on both ends of the floor. I'm not surprised if he'll start soon. We need a real PG who can involve other players and DJ makes it look really easy to find shooters/slashers. Drought season of dunks is over. Here they come!