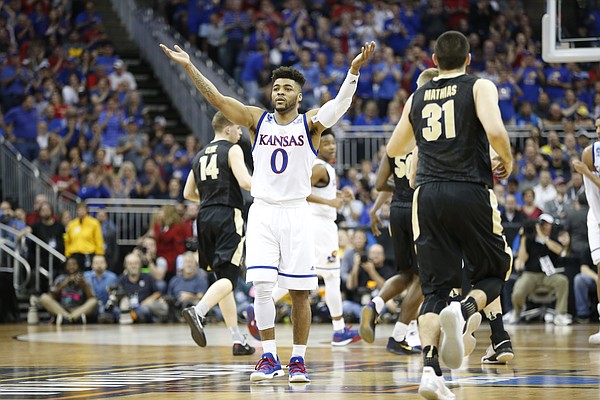 It’s still too early to know exactly what will come of the one-and-done rule in college basketball, but there is enough talk out there to lead one to believe it is coming to an end.

And you know what that means. Lists, lists and more lists.

And then there’s this one from ESPN.com, which recently ranked the 50 best individual seasons in the one-and-done era.

Before perusing the list, I wondered allowed if any Jayhawks made it. My first guess — made without much thought — was Thomas Robinson during the 2011-12 season.

Remember, this particular list isn’t a look back at the best seasons by one-and-done athletes. Instead, it’s a look at which players fared the best during the one-and-done era.

Robinson, a first team All-American that season, was on there, at No. 42, after averaging a double-double and leading the Jayhawks to the national title game in 2012.

Three out of 50 isn’t bad. Duke had just two (Zion Williamson and Jahlil Okafor) and Kentucky had three, as well, with Anthony David, John Wall and Karl-Anthony Towns all making the list.

This Top 50 is a true who’s who of college basketball stars during the past couple of decades. I was a little surprised that Devonte’ Graham did not make the list for his senior season, but it’s tough to find an automatic spot for him to jump somebody.

Although his scoring numbers weren’t as good as Mason’s, the way Graham led that team and finished among the nation’s leaders in assists made just as much of an impact in my eyes.

Anyway, back to the list. The thing that jumped out to me far more than the wide range of programs represented on the list was the fact that Kansas, at one point or another, faced off against 24 of the 47 other names on the list.

So many monster names and so many memorable games.

Graham was the only other Jayhawk I could think of who deserved consideration for this exclusive list. After all, he, too, was a first-team All-American who led his team to the Final Four. I suppose Devon Dotson might have a case, too.

Either way, the Jayhawks are well represented by three players who turned in three of the best individual seasons in the history of the program.

Mason’s numbers — 20.9 points, 4.2 rebounds and 5.2 assists per game — were unanimous national player of the year good.

Robinson’s 27 double-doubles in 39 games and 17.7 points and 11.9 rebounds per game averages were all so clutch on a thin team.

And Azubuike not only was the toughest individual matchup in all of college basketball when he had the ball last season, but he also earned the NABC’s Defensive Player of the Year award for his ability to protect the paint and guard on the perimeter.

All three someday in the not too distant future will have their numbers hanging in the Allen Fieldhouse rafters. So, too, will Graham and Dotson, for that matter.