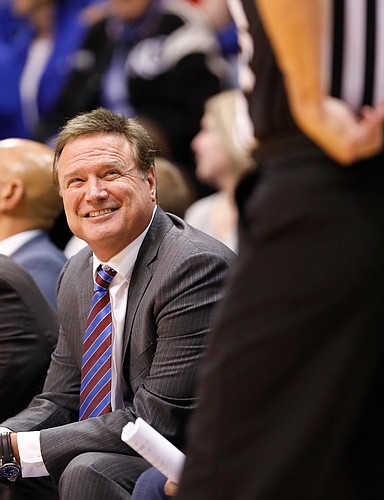 The Kansas men's basketball team will be welcoming a handful of new faces and seeking to replace popular starters Devon Dotson and Udoka Azubuike in the upcoming season, but coach Bill Self is hardly concerned with roles and minutes right now.

“As far as tinkering and stuff, it’s hard for me to come up with ideas on how to play when I haven’t even seen four of them play yet,” Self said of newcomers Bryce Thompson, Tyon Grant-Foster, Gethro Muscadin and Latrell Jossell during a recent episode of his “Hawk Talk” radio show.

Now, of course, Self has seen all four play basketball. But he has not seen them do it at Kansas, and because of the COVID-19 pandemic, it’s been a while since he’s seen them play at all. So even as talented as all four newcomers were with their high school and AAU teams, the next time Self sees any of them play will effectively be the first.

When he finally does get to see them, there will be rust. There will be growth, physical and otherwise. And all four will need time to adjust to college, Kansas, their coach and the grind.

As of today, KU’s players are expected to report to campus for summer workouts by July 19. Coaches can start working with them in a limited capacity beginning July 20. Both dates still could change as the pandemic continues to play out, but the roster likely will not.

None of this is to say that the Hall of Fame coach with more than 700 victories has no idea what he’ll do for the upcoming season. Self will probably do what he normally does, preaching defense, ball movement, effort and toughness.

The ones who handle it the best and deliver under pressure will be the ones who play the most minutes. And with the excess depth both on the perimeter and down low, Self will have many options.

“I see us playing four around one a lot,” Self said of the four-guard approach that has become the norm during recent seasons. “But we’re still going to have to play two bigs some.”

The roster has nine perimeter players, three of whom can play the 4 position in small lineups and four of whom will be playing their first games at Kansas during the 2020-21 season — five if you count redshirt freshman Jalen Wilson, who played all of two minutes in two games before getting injured last season.

The roster also has four big men who, most nights, will be asked to hold down one spot.

As a result, there are plenty of options. Three ball-handlers and two bigs? Check. Four long and athletic wings and one big man? Check. Three shooters and two bruisers? Check. And on and on.

“So let’s get them here,” Self said. “And then we’ll mess around and come up with hopefully some stuff that’ll probably look a lot like the past, (with) maybe some tweaking going on to best fit our personnel."

While this is the weirdest, most messed-up off season ever, KU & HCBS have the same old predicament. How do you find PT for a boat-load of talent? If last year's team was picked to win everything, seems like this team has that much talent again!

I'm kind of glad that the early bracketology has KU as a 2-seed in the midwest region. Seems like we do better in the tournament when folks don't think we're that good...

It's looking like there may not be a season at all with this covid19 madness.

Here is a season prediction to consider with Covid-19.

The season will start earlier than normal while the number of games dramatically reduced. We will see all of the pre-conference tournaments (Maui, Hall of Fame, Wooden, etc...) canceled and teams are forced to reschedule most if not all of their other non-conference games.

We will end up having a season of conference games only spread out to a 1-weekend game per week schedule instead of the normal 2 games per week, thus allowing the season's postseason tourney's to begin on time.

This way no matter what a conference decides (play or not play), it will not impact other conferences. Besides, there are usually only a small select handful of non-con games nationwide worth watching.

I like it, Thomas. And I think something like that would be a very sensible way to move forward. I'm hearing more and more talk about that each week. Quick question: Did you read more about this idea somewhere recently? Always trying to find as much info as I can. Thanks for the comment!

Matt - No, I haven't read this anywhere. I just looked at the landscape and how it would be possible to play "meaningful" games and decided that the only ones we really care about are conference games and that we don't need to worry about what other conferences do this way.

I did read somewhere that football may defer to the spring semester and the same could occur there with conference-only games.

I'm all for it as long as there is any type of season.

A great start would be for the firing/resignation of the cheater in chief. Why not use the trumpvirus, as an opportunity to purge what ails us? And burn that abomination southeast of AFH to the ground.

A great start would be for the banning/resignation of the whiner-no-chief. Why not use the Trumpvirus as an opportunity to purge what ails us? Ban that abomination of a user profile and save us and Brett the aggravation of his miserable existence.