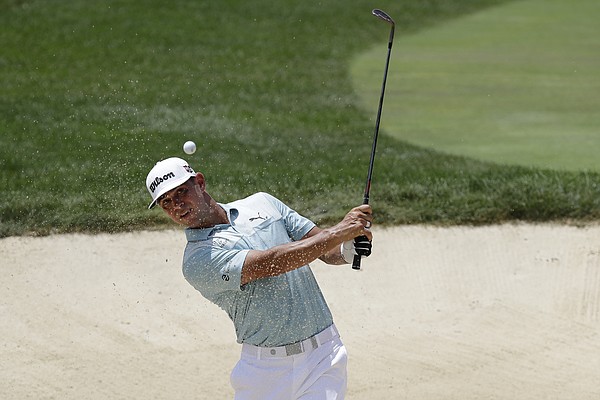 Gary Woodland hits from a bunker toward the first green during the third round of the Memorial golf tournament, Saturday, July 18, 2020, in Dublin, Ohio. by AP Photo/Darron Cummings

Former University of Kansas golfer Gary Woodland suffered a bogey-filled day and shot a 4-over-par 76 at Saturday’s third round of the Memorial in Dublin, Ohio.

Woodland dropped eight spots in the standings and remains tied for 12th but sits 10 strokes back of leader Jon Rahm heading into Sunday’s final round.

Woodland shot 68 and 70 in Rounds 1 and 2 to put himself in contention heading into Saturday, but he lost ground on the leaders throughout the day.

The warning signs of a rough round surfaced early. The Topeka native carded three bogeys in his first six holes before recording his first and only birdie of the day at No. 7. Woodland followed that up with a bogey at No. 8 and another at No. 10 and never made up ground after that.

Woodland parred the final eight holes of his third round to give him 12 pars, five bogeys and one birdie for the day.

Despite the rough round, Woodland remains in contention for a Top 10 or even a Top 5 finish. He finished tied for fifth on the same course last week at the Workday Charity Open and is three strokes back of two golfers at 5-under heading into Sunday.

Three golfers will enter the final round at Muirfield Village Golf Course at 3-under for the tournament and tied for ninth, just one stroke ahead of Woodland and five others tied for 12th at 2-under.

Rahm, meanwhile, shot the best score of Round 3 (-4) and was one of just 20 golfers under par during Saturday’s round. He will take a four-stroke lead over Ryan Palmer and Tony Finau into Sunday.

Mr. Tait, My Opinion is that 'tied for 12th' in a professional golf tournament is indicative or playing very well. What is the payout for being 12th? for a weeks work?