'Who knows what the correct formula is?' Kansas basketball coach Bill Self responds to Duke coach Mike Krzyzewski's questions about college basketball in a pandemic 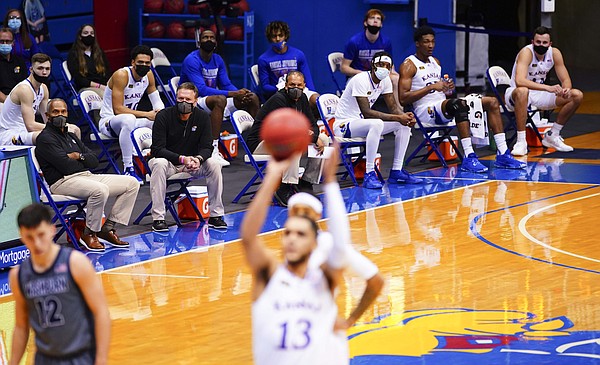 Bill Self and the Kansas bench sit socially-distanced on the sidelines as Kansas guard Tristan Enaruna (13) shoots free throws during the first half on Thursday, Dec. 3, 2020 at Allen Fieldhouse. by Nick Krug

Mere minutes before news broke that the Duke men’s basketball program was cancelling the rest of its non-conference schedule in the wake of Duke coach Mike Krzyzewski’s recent questions about whether it was wise to be playing basketball, Kansas coach Bill Self explained why he thought it was.

“I'm not saying basketball, in any way, shape or form, is more important than public health or anything like that," Self said during Thursday’s Zoom call with reporters. “The precautions that we do and the protocols that we have, I would think would be in many ways far safer than if we weren't playing and just turning the guys lose. Because it would be hard to have protocols like this if there’s no actual games.”

Barely two weeks into the pandemic-delayed 2020-21 season, Self’s Jayhawks sit at 5-1 and ranked No. 5 in national polls.

The Jayhawks have been luckier than a lot of teams. Across the country, positive COVID-19 tests have caused temporary shutdowns of basketball activities at schools big and small. Many programs, including Kansas for its first two home games, have played in mostly-empty arenas, adding an eerie vibe to an already strange college basketball season.

For that reason, and others, Self said he understood part of what Krzyzewski was saying when he told reporters that he did not think that playing games in the middle of a pandemic was sensible after an 83-68 loss to No. 6 Illinois that dropped the Blue Devils to 2-2 on the season.

“I don't think it feels right to anybody,” Krzyzewski said. “I mean, everyone is concerned.”

Coach K continued: “We made an assessment. I'm not sure who leads college basketball. It's done by committee. Anything that’s led by committee is not agile in handling a situation. There was a consensus. It wasn't like well-planned. Just that we were going to start Nov. 25. That was made without knowing where the vaccine was, how many cases. Basically, it was more a mentality of get as many games in as possible. I would just like for the safety, the mental and physical health of players and staff to assess where we’re at.”

“I’m certainly not in total disagreement in what (Krzyzewski) said,” Self said Thursday. “I also think there’s been a lot of safety measures that a lot of people have attempted to do. Nobody bats 1.000, and, of course, there's been some unfortunate cancelations and things like that. But I would think that it would be much, much higher if we didn't have all these protocols in place and if we weren’t playing games — at least from our own team’s perspective.”

One of the biggest things Krzyzewski emphasized during his recent comments was the mental health of his players and how they have been affected by being put on the floor during these crazy and uncertain times.

Self was asked on Thursday to share his assessment of the mental health of the Jayhawks and he said he thought that playing games during the past couple of weeks has helped his team in that department.

“Going through what everybody went through last year with the cancelation of the tournament, being away from each other all summer for the most part, coming back, I’m not saying it’s perfect by any stretch, but I think if we take it away I also don’t think that would be the greatest thing, either,” he said.

In fact, Self said a recent team decision about the upcoming weeks was made with the Jayhawks’ mental health in mind. As of today, Self said he planned to allow his players, who have largely lived in a bubble-like environment between McCarthy Hall, Allen Fieldhouse and the practice gym, to go home for Christmas to spend time with their families and to get a break from the daily grind of this strange season.

“Even though it's probably not the safest thing for today, I think it's better for long term,” Self said.

“Who knows what the correct formula is,” Self added. “You ask guys to be in a bubble basically for five months, which we have. They’re basically bubbled up. And then you’re saying, ‘And you can’t see your family for Christmas.’ I think then problems could really start to occur … in late January or early February.”

The Jayhawks play host to Omaha at 6 p.m. Friday and will close out the early portion of their non-conference slate at 1 p.m. Sunday against Tarleton State.

Bill Self addresses playing during pandemic, Jayhawks’ 5-1 start by KUsports.com

The best response to this crap was coach Oats was at Alabama. “Do you think if Duke didn’t lose those 2 non-conference games they would feel same way?” Hit the nail and hit it hard on Mr Pinch Nose. Duke off to worst start in 2 decades has nothing to do with them cancelling games? If he was that concerned he would of went to the school and said we are not playing at beginning of year. Everyone doing what they can and obviously college kids risk is so low it’s not funny. This will never stop. We’re now basically on month 10 or 11 and people use to tell me we would get back to normal. I truly believe people don’t want things to be normal. I’m referring to our freedoms that is.

Spot on Adam. At first I thought it was aimed at bringing down President Trump. I still believe that to be true.....but I was thinking too small. It’s much bigger than that. It’s about CONTROL, taking away our freedoms....THEM telling us what we can and can’t do, Constitution be damned.

As far as letting the team go home for Christmas and being with family? 100% agree with Coach Self. Let them go. Will do wonders for them mentally

So the entire world is in on this "Trump hit job" and controlling US citizens? The world leaders can't even agree on simple things but you think the whole world is in on this massive control scheme together and not one person has leaked this plan? That's a pretty big stretch IMO. Politicians aren't known for their ability to keep secrets, or to work together.

So the most successful living college basketball coach canceled games against Charleston Southern and Gardner Webb because he’s afraid of losing? I don’t think so.

It could be that he's not afraid of losing those two games but does want more time to practice before league play starts and he plays teams he is scared of losing to. He's been know for finding reasons to not coach during down seasons in the past so you have to at least be open to the possibility of him doing it again this year.

Shannon - I’m not saying I agree with all of the sentiment expressed, but would point out that the whole world doesn’t have to be in on “the plan” just because they’re affected by it. I think some refer to it as collateral damage. leaders have been known to be indifferent to who is hurt or killed as long as their plans succeed. The chessboard isn’t filled with as many pawns as in life.

If all of the world leaders are willing to "sacrifice" millions of lives to try to get rid of a guy that could get ousted by voters anyway, I'd think it would have been easier to just covertly finish him off and be done with it. That's something world leaders have been known to do to other leaders in the past.

I try to lean towards the most simple explanation for things as 9 times out of 10 that's the right one and conspiracies that involve the entire world don't fit in that category, nor do conspiracies that involve killing hundreds of thousands of your own people in order to "maybe" effect an election in another country...if they are lucky. This is particularly rare/non existent from 1st world countries. They are more likely to take the fake news/hacked emails/social engineering path to altering elections.