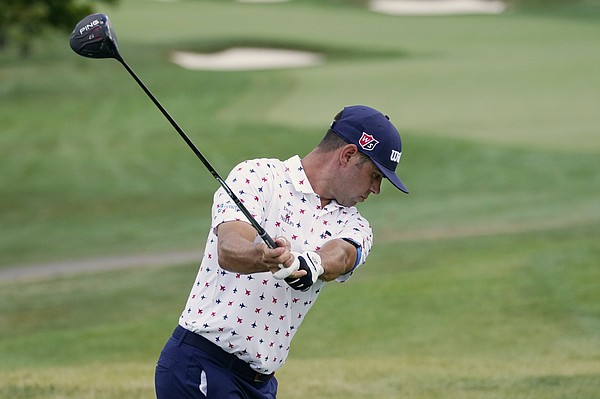 Gary Woodland tees on on the 10th hole during the second round of the BMW Championship golf tournament, Friday, Aug. 28, 2020, at Olympia Fields Country Club in Olympia Fields, Ill. (AP Photo/Charles Rex Arbogast) by Matt Tait

At an event full of rounds over par, former University of Kansas golfer Gary Woodland shot a 2-under 68 on Sunday to finish tied for 33rd at the BMW Championship in Olympia Fields, Ill.

Sunday’s round was Woodland’s only sub-70 round of the tournament and he finished at 7-over for the event after shooting rounds of 75-70-74-68.

After recording three birdies and a bogey on Sunday’s front nine, Woodland birdied two of his final six holes to deliver his best round of the week.

Woodland’s top-40 finish marked his best result since placing 22nd at the Memorial in mid-July.

Jon Rahm defeated Dustin Johnson on the first hole of a sudden-death playoff to win the BMW Championship. The two finished tied at 4-under after 72 holes.

Just two events remain before Woodland heads to upstate New York to defend his title at the pandemic-delayed U.S. Open, which is slated to begin Sept. 17 at Winged Foot Golf Course.

Originally scheduled for June 18, — roughly one year after Woodland became the first former Jayhawk to win one of golf’s majors — the event was pushed back because of COVID-19 and will now be the second of three majors played this season.

The PGA Championship is already in the past and The Masters, in Augusta, Ga., has been rescheduled for mid-November.

Gary is a great golfer. We will continue to see him in every tournament. But, did you see those last two putts? Phenomenal!

There is only one more event in this crazy current season, and that is the Tour Championship this weekend. It is the final event of the Fed Ex Cup Playoffs, and since Gary finished outside the top 30 in Fed Ex Cup points, he did not qualify for that event.

The first event of the new season is the Safeway Open Sept 10-13 before the U S Open the following week, but it is on the West Coast and the U S Open is on the East Coast, so no idea if he will play that week or not. He may well take a couple weeks off before heading to the U S Open, so we all hope to see him do well in defending his title! RCJH