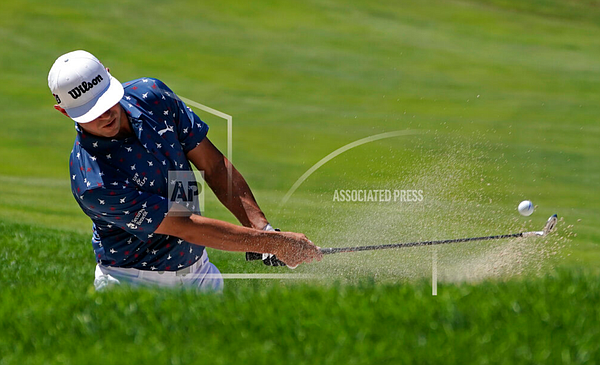 Gary Woodland hits from a bunker on the 15th fairway in the first round of the Northern Trust golf tournament at TPC Boston, Thursday, Aug. 20, 2020, in Norton, Mass. (AP Photo/Charles Krupa) by Matt Tait

Former University of Kansas golf standout Gary Woodland shot a 2-over 73 on Friday and missed the cut at the Northern Trust golf tournament in Norton, Mass.

Woodland, who shot a 2-under 69 in Thursday’s opening round, positioned himself on the cut line — at 3-under — midway through Friday’s round.

But two double bogeys and three more bogeys on the day proved to be too much to overcome.

Woodland, who took last week off, after finishing tied for 58th at the PGA Championship earlier this month, will now turn his attention to the PGA Tour’s next stop, the BMW Championship in Olympia Fields, Ill.

Just three events remain before Woodland heads to upstate New York to defend his title at the pandemic-delayed U.S. Open, which is slated to begin Sept. 17 at Winged Foot Golf Course.

Originally scheduled for June 18-21, — roughly one year after Woodland became the first former Jayhawk to win one of golf’s majors — the event was pushed back because of COVID-19 and will now be the second of three majors played this season.

The PGA Championship is already in the books and The Masters, in Augusta, Ga., has been rescheduled for mid-November. There will be no British Open in 2020.