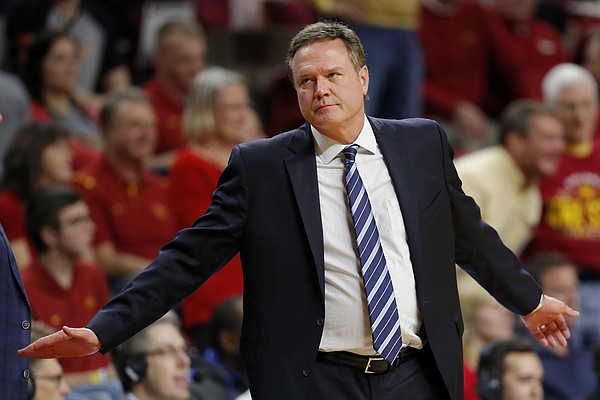 Kansas head coach Bill Self reacts after a call against his team during the first half of an NCAA college basketball game against Iowa State, Saturday, Jan. 5, 2019, in Ames, Iowa. by AP Photo/Charlie Neibergall

While Monday’s news of Kansas receiving a Notice of Allegations from the NCAA kick-starts a monthslong review process, its outcome likely will have no impact on the Jayhawks’ upcoming season.

Where it could cause problems first is on the recruiting trail.

That was KU’s reality throughout the recent federal investigation into college basketball recruiting, which KU coach Bill Self on more than one occasion said had hurt the program’s recruiting efforts.

Now that KU has been placed even more directly in the crosshairs of the NCAA, it remains to be seen what impact that news will have on the prospects the Jayhawks are currently pursuing.

A quick check of the social media accounts for some of KU’s top targets in the 2020 class on Monday evening revealed no notable reactions to Monday’s news.

At the moment, KU has one open scholarship — from Issac McBride’s recent decision to leave the program — and is expected to have at least two or three more available after the 2019-20 season. As a result, Self and company could have as many as four or five spots to fill in the 2020 recruiting class for the 2020-21 roster.

While the recruiting efforts for players in that class and beyond have been in full swing for months, the movement from this point on is worth monitoring as the process plays out.

KU has three months to respond to the NCAA’s NOA. From there, the NCAA has another two months to answer KU’s response. And it likely will be another couple of months from there until a hearing can be scheduled and completed.

That puts the timeline for a ruling on the NCAA’s allegations, which include three Level 1 violations in men’s basketball and a head coach responsibility charge levied against Self, toward the back end of the 2019-20 season or later.

While the ruling ultimately will decide what punishments, if any, are handed down to Kansas and Self, the more immediate movement on the recruiting trail could impact KU’s next couple of seasons and rosters well after the case is closed.

In statements released Monday evening, Self, KU administrators and attorneys vowed to fight “vigorously” against the allegations, with KU Chancellor Douglas Girod and Athletic Director Jeff Long saying they stood fully and firmly in support of Self and the men’s basketball program.

Here’s a quick rundown of some of the top 2020 targets who are worth watching in the weeks and months to come as their recruitments heat up and decision day nears.

All of the prospects mentioned below have been interested in KU for months and have scheduled official and in-home visits. A handful are slated to come to KU’s famed Late Night in the Phog on Oct. 4: Five-star power forward Isaiah Todd (No. 10 overall in 2020 class per Rivals.com); five-star shooting guard Bryce Thompson (No. 19); five-star point guard Caleb Love (No. 21); four-star forward Kyree Walker (No. 42); four-star forward Moses Moody (No. 50); four-star power forward J.T. Thor (No. 53); four-star point guard KK Robinson (No. 80); and four-star center Gethro Muscadin (No. 130).

The Jayhawks’ exhibition season opens Oct. 24, with the regular season opener slated for Nov. 5 against Duke in the Champions Classic in New York.

Think its safe to assume that Self may have to abandon his pursuit for any player ranked above 50 until this all blows over...maybe our lack of higher ranked player signing could lead us to the same success Roy had at UNC in the years he couldn't land top talent during the academic investigation...at least we will get this season to cheer before finding out our fate

I don't know how much recruits look at the post season. They do get a ton of national exposure (if that is what they are primarily concerned with) just playing for KU which typically has most games on TV.

Recruits not taking post season seriously are the ones we need to avoid. Why do we want someone who's just fine with winning the big 12 title?

Look at this years recruits, while they are all talented and I am proud to have them as Jayhawks, not any real Top 10 one and dones, more local kids expected to play multiple years. Trust me the top recruits have already been hearing the rumor out of a lot of competing coaches on in home visits.

The NCAA obviously has it out for KU, the pattern of investigation and losing big men like Diallo prior to all of this, dragging their feet on Preston till he just went away, trying to make Sylvio just go away with a two year suspension, and now these charges based on the FBI's case that the programs were defrauded, testimony included that nobody was aware of payments being made, except by maybe other programs in Ayton and Zion's cases.

They are trying to be holier than thou by trying to crucify KU and Bill Self. Even if we successfully defend the charges, avoid probation and punishment, it will affect our recruiting for years while the process plays out, handicapping the Top 50 recruiting field back to tobacco road and KY. Where are the charges against AZ, OSU, Louisville and the others? What about the Nike teams, apparently all the shoe companies were doing it and the terms for Zion were already well defined in the Adidas trial as were those for Ayton.

The NCAA is probably waiting for the other shoe to drop (pun intended) on the Nike schools when the FBI goes after the Nike reps.

Their time is coming!

We're probably lucky that Preston did NOT play.

Perhaps a recruiting blessing in disguise? I’d rather have three and four your kids than one n dones.

Matt or anyone else,

Can you tell me who pays for the lawyers to defend the university in these allegations? Is it the taxpayers of the state of Kansas?

Good question. KU employs full time general counsel for all legal matters so that's certainly part of it. I'll have to ask about the rest to be sure, but I would imagine the attorneys representing Self specifically are paid by Self, though there may be language in his contract that specifies that Kansas Athletics Inc., pays all or a portion of any such legal fees.

I'll look into it.

As a Kansas taxpayer, and a curious yet biased bystander, I appreciate that. Thanks Matt.

The first nail in the coffin fell last year when the cloud over the program was felt. I think recruiting was affected. We just witnessed our first bailing out of a recruit maybe due to the potential hits coming maybe not. I am certain until this is all addressed more negative vibes will be around the program. Lets just move ahead and we will find out who the true Hawkers are.

Steve - I’m not inclined to defend the ncaa, but it is nonsense to say they drug their feet in Billy’s case. It certainly felt like it while it was going on but then the trial happened and the whole world got to see their silly greed. The time it took was based on the number of stories made up by momma, and I’m guessing more than a few, Really? You want us to believe that?!?

What I do believe they’re trying to do is make up for Alexander and all the others they are convinced were paid and never caught. It probably doesn’t help that the courts flipped them off repeatedly because they saw through the legal nonsense.

Sadly I don't think the NCAA really cares about the evidence, this is about getting a big dog and bringing them down. If we are really so corrupt, why don't we get the very top players, Hm?

If there is a smoking gun here, it is somebody vaping.

Innocent until proven guilty, not innuendos, not maybe's, not it just makes sense. But evidence. And KU should not allow the phony booster definition to define the case.