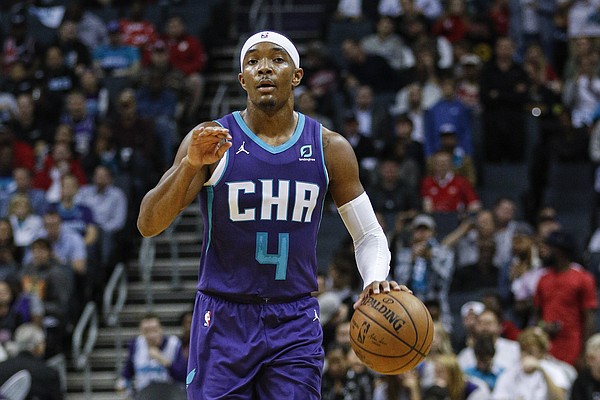 After Kemba Walker agreed to join the Boston Celtics this offseason, the talk around Lawrence turned to the opportunity that opened up for former Kansas point guard Devonte’ Graham in Charlotte.

But that chatter was muted some by the Hornets’ move to acquire Boston point guard Terry Rozier as part of Walker’s departure. In a sign-and-trade move, Charlotte acquired Rozier and quickly inked him to a three-year deal worth $58 million.

At the time, the move looked like one that would establish some stability at the game’s most important position. Today, it looks like a gross overpayment, as Graham — the second-round pick in Year 2 of a three-year/$4 million rookie contract — has outplayed his teammate at the point during the first week of the season.

In four games so far this season, Graham has put up some impressive numbers, averaging 17.5 points and 7.3 assists per game during that time, all in roughly 29 minutes per game.

In a Game 1 win over Chicago, the former Jayhawk hit seven of night shots from the floor — six of seven from 3-point range — and finished with 23 points and eight assists.

He followed that up with a 24-point effort in a loss in Game 2 and recorded his first NBA double-double (14 points and 12 assists) in a Hornets loss to the Clippers on Monday night.

Rozier, meanwhile, currently holds averages of 13.5 points and 5.5 assists while averaging nearly the exact same time on the court. The fifth-year pro also is shooting 40% from the floor and 38% from 3-point range.

This is good news, of course, for the Hornets, who clearly are able to feel comfortable with either player running their team.

And while Graham is off to a blazing-hot start, it’s unlikely that his shooting numbers will continue to stay where they currently are.

Unlikely, but not impossible.

That’s the thing about Graham’s start that has impressed me the most. Sure, the numbers are good, but it’s the way he’s getting him that really jumps out.

The former KU All-American and Big 12 Player of the Year looks every bit like his old Kansas self, pulling up for jumpers with extreme confidence, shaking defenders with his handles and playing an aggressive, attacking style whenever the ball is in his hands.

Sometimes that aggressive play leads to a jumper. But just as often, Graham uses that approach to set up his teammates, a skill he perfected during his stellar senior season at KU.

If the numbers alone don’t do it for you, consider these recent headlines about Graham’s hot start.

From swarmandsting.com: Devonte’ Graham is showing early signs of greatness

From The Charlotte Observer: Can playing Devonte’ Graham with Terry Rozier make the Charlotte Hornets competitive?

Another from The Observer: Don’t confuse Devonte’ Graham’s career night as a Hornets point guard controversy — yet

It's still early and Graham's still young by NBA standards. But it's clear that the work he put in during the offseason has positioned him to be ready for the opportunity at hand.

What comes of it remains to be seen and might still be hugely dependent on those Rozier contract figures. But what Graham makes of it is entirely up to him. So far so good in that department.

'Tae got robbed big times. I hope he'll stay hot and earn what he deserves. He's currently way underpaid. Thanks for the update on Graham, Matt! If only you guys have a thumb-up on every article, this is worth 1000s!
It's time for uplifting story from KU's ex in the NBA - like Graham. Now, we have Embiid, Graham, perhaps Wiggins (if he shows up this year), and maybe, maybe Svi (who looks bulkier but slower this year). A nice article would be how Graham did it in the G-league.

Kelly Oubre is off to a great start to...missed a big shot last night to win the game for the Suns but he looks good.

Will this season a breakout year for Diallo? He did pretty good last season. How's BIFM doing? I hope he'll drive players crazy this season. Wow, I didn't realize we have quite good fellas still active in the league!!

There’s even more’Hawks in the NBA.