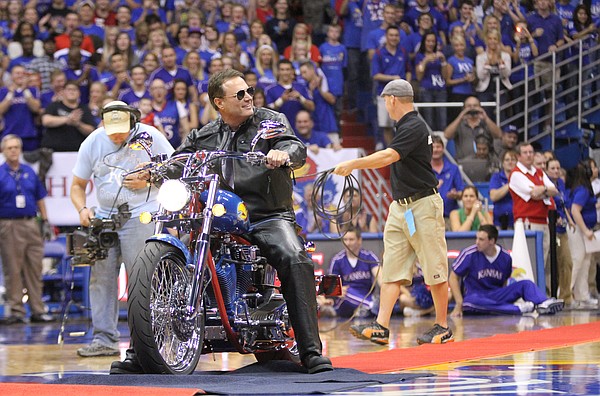 Kansas head coach Bill Self rides out onto James Naismith court on a custom-made motorcycle with imagery from the 2008 National Championship during Late Night in the Phog on Friday, Oct. 14, 2011 at Allen Fieldhouse. by Nick Krug

Late Night is now just two days away and there appears to be more than ever to keep an eye on this year.

From a rowdy fan base to a deep roster and dozens of skits, one-liners, videos and highlights, this year’s season tipoff figures to be one of the most energetic in recent memory.

Maybe that’s because fans of the program believe today that Kansas basketball is under attack and they’re dying to show their love and support.

Maybe that’s because the Big 12 streak is over, the roster is loaded and this will be the first official opportunity for the team and the fans to put that bad taste from last year’s Auburn loss out of their mouths once and for all.

Regardless of the reasons, this year’s Late Night is loaded with reasons to pay attention and in the lines below I’m going to spell out the five things I’m most looking forward to seeing at Late Night 2019.

I’d say top 6, but I think it goes without saying that having Snoop Dogg in the house is, and should be, at the top of everyone’s list. So there’s no need to waste much time breaking down why Snoop’s presence is a reason to get pumped up.

Whether you’re there to see it or not, Kansas landing a legend like Snoop is a massive deal and should bring all kinds of energy to an already-electric night.

So with Snoop at the top, here’s a look at the rest of the list of things worth looking forward to on Friday night, all of them of the actual basketball variety...

You’ve seen De Sousa on the bench, read about his return to practice and maybe even followed him on Instagram, where he has kept a running diary of how hard he’s been working and how excited he is to play again. But now you’ll actually get to see him run around with his team.

Not since last year’s Late Night has the junior forward been on the Allen Fieldhouse floor for something that mattered. And although Late Night will pale in comparison to the exhibition opener in three weeks or the home opener in early November, seeing Silvio in uniform, feeling the love from the fans and soaking up every minute of it should be a pretty cool moment.

Remember last year’s Jayhawks, who struggled to stay in the Big 12 race, lacked depth up front and just never really found their flow on offense and defense? Yeah. Those guys are gone. And in their place — even though it’s many of the same faces — is a group of players hungrier than ever to go claim what they believe is rightfully theirs — win after win, a Big 12 title and a spot among the top national title contenders.

Kansas State and Texas Tech may have won the Big 12 regular season title a year ago, but the guess here is that you’d never know that at Late Night. These Jayhawks are as confident and cocky as ever and it won’t be hard to see that on Friday night.

It’s just a scrimmage, with very little defense, and there’s usually not a whole lot that can be learned about the team or the season based on who plays with whom, how much they’re out there or what kind of stats they record.

I’ll never forget writing about Carlton Bragg Jr.’s big Late Night a few years back as the indicator that he was ready to pick up the offensive slack left behind by Perry Ellis’ departure. And we all know how that worked out.

But individually speaking, you can see some things. And I think watching newcomer Isaiah Moss shoot the ball will be a big one. Moss, the senior grad transfer from Iowa, was brought to Lawrence to do just that — shoot the rock. And it will be fun to get a look at not only how and where he shoots it, but how often he gets his looks.

Because of the makeup of the rest of the roster, his ability to be a serious threat from 3-point range will be a huge storyline for the Jayhawks this season.

Again, Late Night is not really about the basketball portion of the evening — even though that’s always fun to watch and it provides a decent glimpse at some of the individuals — but there’s little doubt that this team’s speed will be on display throughout Friday’s scrimmage.

Starting with Devon Dotson at the point and running all the way through the guards, forwards and even a new-and-in-shape Udoka Azubuike, these Jayhawks are going to play fast and get after it on both ends. You’ll see plenty of that at Late Night and the competition on the roster, from top to bottom and position by position, should create some entertaining individual battles and a competitive scrimmage.

Know this while you’re watching though: Whatever speed you see at Late Night, while probably a little sloppy, figures to look even more impressive when the season starts and they’re all running for the same team.

Entering his 17th season in charge of the Jayhawks, Self said recently that he expected to be as motivated as ever to really lock in and coach this team better than he ever has before.

Part of that comes from the outside distractions facing the program, but the other part of it comes from the fact that Self realizes just how good this roster is and how much potential it has.

Remember in No. 2 when I talked about the swagger that you’ll likely see at Late Night? Don’t be surprised if that extends to Self, too. For one, he’s always in rare form at these events, whether that be in his comments, his wardrobe or his willingness to do something off the wall that nobody expects. We've already seen a heck of a show in that video announcing that Snoop was coming to Late Night and there could be more where that came from.

Although he'll still bring his Joe Cool persona to the event, I think you’ll see a pretty fired up Kansas coach who’s willing to make it crystal clear that he and the Jayhawks mean business this season.

"Late Night is not really about the basketball portion of the evening?" And Snoop Dog is the #1 reason to attend? Such a pity. It's the end of the world as we know it.

I agree. Now if I only knew some Snoop Dog lyrics...

You both got me... But I'll stand by my statement. They don't play defense, Self can barely stand to watch and nothing you see at Late Night means much in terms of what's coming in the season ahead.

It has become — and really always has been — a celebration of the tip off of another season and a recruiting tool that has gained importance as the years have gone by.

Occasionally something of note basketball-wise, can be seen at Late Night. Remember when everyone came to see Number One recruit Andrew Wiggins for the first time, especially the NBA scouts? I said it at the time and a lot of folks, almost certainly the NBA scouts, walked out saying that tall kid Embiid may be an even better find than Wiggins! He certainly wowed the fans that first night!

I just adore all the bill self get ups - rocker, nerd, hip hop artist, biker...its awesome! really helps put him in touch with the players and fanbase. wonder what he is going to do this time - pirate? clown? astronaut? I CAN'T WAIT !!!!

Matt, just to be clear....was Late Night first initiated by Larry Brown, way back in the early Eighties, and is essentially a KU Celebration that now is copied by almost every university in America?

"Late Night With Larry Brown." For quite a few years, it started at midnight to coincide with the first date teams could practice under NCAA rules. it was tough going to work the next day sleepy, hungover, and hoarse.

I wish I still had my collection of old Late Night t-shirts.