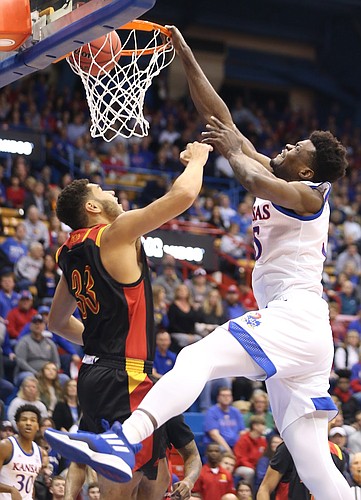 Plenty accustomed to talking about the topic for the past few years, Kansas basketball coach Bill Self was asked after Thursday’s 102-42 win over Pitt State if he expected senior center Udoka Azubuike to spend some extra time between then and Tuesday’s game against Duke working on his free throw shooting.

“Dok’s worked on it between when he first got here and today,” Self said. “So working on it between now and Tuesday isn’t going to solve the issues. He’s just got a mental block with it. So I’ve got to do something to help him with that.”

That could be easier said than done.

“He makes them in practice and it looks different in practice,” Self said. “In games, obviously it’s got a totally different feel to it. … He should shoot 500 a day for the next few days.”

In KU’s two exhibition games, Azubuike connected on just one of nine free throw attempts, missing an additional attempt after a lane violation in Game 1.

“That’s going to be a concern each and every game,” Self said. “Just stating the obvious; in late game situations what do you do? He’s got to be able to make at least 50% or they’re just going to hack-a-Shaq him every time. As strong as he is, people aren’t going to just give up layups. They’ll try to make sure he has to earn (his points at the free throw line). I still believe he’s going to do it. It’s too early to push the panic button. But it’s certainly something we need to get better at for sure.”

Azubuike's free throw woes most famously go back to a road game at Oklahoma two seasons ago, when he missed several free throws down the stretch of a close game, causing Kansas to lose its lead and the game.

Despite OU intentionally putting Azubuike on the free throw line for several possessions in a row, Self left him on the floor, hoping to provide a boost in confidence both from the fact that he stuck with him and the hope that he could knock a few down.

It did not work out that way and the Azubuike free throw experience has been a popular topic ever since.

I don't think it's feeling/mental block. It's exhibition game, coach. He's got to shoot with better mechanic. Period. He looks better. He needs to get much much better...very very soon. He's getting there.

Under-hand maybe??? Can't be any worse.