KU coach Bill Self says senior Lagerald Vick will not return for Saturday's finale vs. Baylor 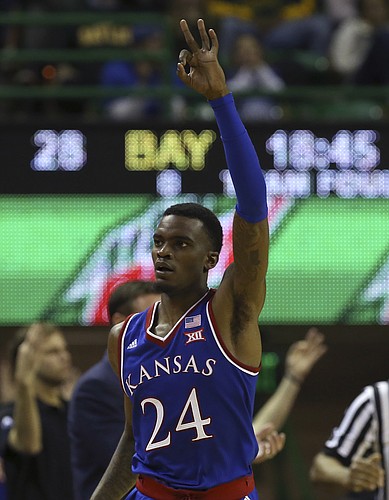 For just the second time in the Bill Self era, there will be no Senior Night for the Kansas men’s basketball program.

While that reality has seemed somewhat inevitable for the past several weeks, it became official Wednesday night, when KU coach Bill Self revealed on his weekly “Hawk Talk” radio show that Lagerald Vick, the lone senior on KU’s 2018-19 roster, would not return from his leave of absence for Saturday’s regular season finale vs. Baylor at Allen Fieldhouse.

“Lagerald is not going to be back for the game Saturday,” Self told “Hawk Talk” host Brian Hanni. “We have visited, and he is still taking care of some things so he will not be there on Saturday.”

So, it’s no trophies, no speeches, no time limits, no pregame flowers. And there figures to be a very different feel inside Allen Fieldhouse on Saturday than what has existed at the final KU home game of the season during recent years.

The only other season in the Self era to end without senior speeches was 2006-07, when KU’s roster featured six juniors and the core of the 2008 national championship team.

As for how KU got here this season, Vick, of course, has been away from the team since Feb. 7, when Self announced that the senior from Memphis was taking a leave of absence with no timetable for a return to attend to a personal matter.

Vick has been in his hometown since leaving Lawrence and Self said Wednesday night that he was impressed by how the senior, who still leads the Jayhawks in 3-point shooting (66 of 145 for 45.5 percent) despite missing the past seven games, had handled himself while away from the team.

“Attitude is good. Certainly taking care of business,” Self said Wednesday night. “I think he’s handling everything very well, to be quite candid, without going into any detail, which I won’t.”

One thing regarding Vick that Self was willing to dive deeper on during Wednesday’s “Hawk Talk” was whether the 6-5 guard could still return to the team at some point to help the Jayhawks in the postseason.

“Obviously, it’s getting late (in the season) and we’re going on one month that he would be out,” Self said. “Even though this isn’t etched in stone, for every day that passes, the likelihood of him coming back is less and less.”

With that in mind and no need to carve out any extra time for a senior speech on Saturday, the Jayhawks can turn their entire focus to Baylor, which could be in position to compete with KU for the 3 seed in next week’s Big 12 tournament.

Iowa State’s 15-point loss at West Virginia on Wednesday means KU will be no lower than the 4 seed at the Big 12 tournament in Kansas City, Mo., and would be the 3 seed with either a Baylor loss to Oklahoma State on Wednesday night or a win over Baylor on Saturday.

Here’s a quick look back at all of the seniors honored on Senior Night during the Self era:

Well, this sucks. This "personal matter" must be a really bad situation for Vick to not be able to come back at least long enough to say goodbye to the fans. Surely we can honor Vick in absentia or something.

Wishing you all the best, Vick. You're always in our thoughts. I always dream of you coming back and helping the team win those B12 games. Really wish we could celebrate together on senior night!! Take care, bud.

WOW!! I agree with Bryce...it must be even more serious than we can imagine.

I wish him a completely positive resolution to his issues but I guess that might just close the book on his career at Kansas. Maybe the school could flash his picture on the scoreboard and allow the crowd to give him a big ovation. I'm sure he'll be watching.

Senior night is for players who were solid teammates who didn't play for themselves. Vick wasn't a teammate. I'd rather give a standing ovation to a senior team manager than Vick. Moving on!

You're just a dick. That is all.

Sadly, in life, there are too many Dick’s and not enough Richard’s. I just don’t get the hatred by some for Lagerald. I guess if there are actual things that you can unequivocally suggest happened to substantiate your hatred [“] I’d like for you to state them. And you obviously can’t move on [“] as your hate postings for Vic is many fold.

Last time KU had no seniors they won the National Championship the following season....

Without Doke, De Sousa, or Dedric it is difficult to imagine the Jayhawks having much success in the tournament next year.

Why would Dok leave? He's proven nothing but that he can get injured often and miss free throws. If he can play a full season this winter, then I think his stock skyrockets, but the risk doesn't outweigh the reward with him. Dedric is not an NBA player yet. His outside shooting is getting better, but he would get eaten alive underneath in the pros. I don't see either of them leaving, let alone getting drafted this year.

McCormack will have a year under his belt and Sophmore year is usually a huge jump in production if the talent is there.... which it is, Doke isn't going anywhere, De Sousa has hardly played, Dedric will be replaced but Hurt (upgrade)......... Dotson and Grimes (yes I know, wildcard) will have been in the starting unit for a year and developed. Braun gives us some outside shooting and scorers mentality. Ochai is back. Garrett can shoot 1000 jumpers a day int he summer to get better. You were saying??

Why would Silvio stay? Unless the NCAA lets him play next year he is better off in Europe or even the D league for that matter. After sitting next year he would only have one year to prove himself so why not earn some money doing it. I am thinking Silvio is done.

Dok and Dedric are both considered fringe second round picks, meaning late second round to undrafted. Very high likelihood that both may test the NBA waters and return next season. They'd be smart to do so anyway.

Since Dok already did it once, I don't think he can do it again. Not sure about Dedric.

Something has to be going on with Vick... something deeper. How hard would it be for him to just come back for a day or two to at least get the honor at Senior night? He can always sit out and not play I'd think. It's not like he'd commit to a month. It's a day or two to be able to say goodbye for the last time.

Self is being diplomatic and kind. He is once again doing Vick a favor. It's not like he can be publicly harsh and say: "Vick is no longer on the team once again cuz he is a sh%T teammate who doesn't play D, can't dribble and cares only about how many shots he gets and plays only for himself."

Thought you moved on? I guess you meant just further on down into the postings. More Vic hate postings.......shocking

Why doesn't Self just say he failed two drug tests. Be transparent with the situation.

And you know this to be the case?

I am sooo over Vick. He had his moments, but then disappeared when the team needed him most. IMO as well as several others, he was dismissed from the team without an official dismissal (gone without the hoopla) .............. We may never know !

I've been tired of Vick too. That being said, for most of his KU career he was a good player and great teammate by all accounts. He deserves a chance to be honored on Senior Night. To me, him not coming back for Senior Night is basically the final step in him being done with the team. In an idealistic world, I suppose it's possible that he could come back for the Big 12 tournament or the NCAA tournament. But clearly whatever he has going on in his life is more important than basketball right now. What Self said kind of says it all, "with each day passing, it 's less and less likely he'll come back." I just don't see him coming back at this point. Missing Senior Day is not something to take lightly.

I do hope they flash some highlights of Vicks career at least and perhaps the loyal fans can give him a standing O.

Best guess, it is personal, and maybe a hell of a lot more important than basketball. it seems like for Vick's future, coach did not want to kick him off. There was a miracle's chance that he might have made it back, but coach knew that was unlikely.

All of us should wish the best for Vick, he was a Jayhawk.

He got his starts and minutes cut, and got mad, took his ball and went home. You can root for that if you want. I don't have to.

Glen Miller.... with all do respect to Hurt (who hasn’t signed yet) you’re legit saying he is an upgrade over the should be Big 12 player of the year??? He’s good but that’s a little strong sir...