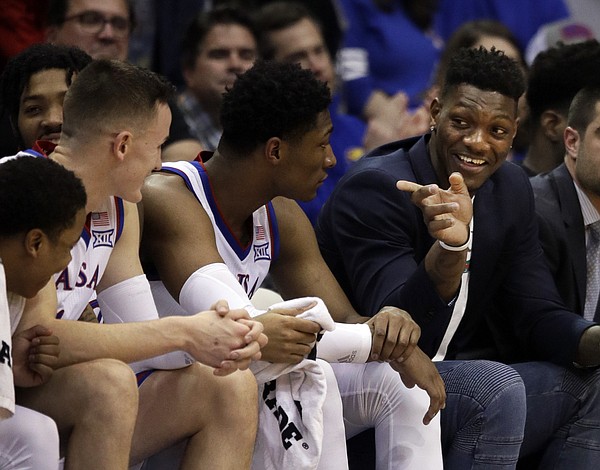 The review of the appeal of the NCAA’s suspension of Kansas sophomore Silvio De Sousa remains ongoing and KU officials say they’re working on it “daily.”

Kansas Athletic Director Jeff Long said as much Tuesday night on the second edition of “Hawk Talk” with Jeff Long on 1320 KLWN radio, when answering a question from the audience seeking an update on De Sousa’s situation.

Requests by the Journal-World to discuss the appeal with Long have been received but not granted.

“There’s not a whole lot I can add,” Long said Tuesday on “Hawk Talk.” “But I do want our fans to know, and coach (Bill) Self certainly knows this, there’s not a single day that we’re not spending time on that and working on Silvio.”

It’s been 53 days since Long announced that KU was appealing the NCAA’s two-season suspension of De Sousa, which stemmed from the involvement of De Sousa’s guardian, Fenny Falmagne, in a pay-for-play scandal that landed in federal court and resulted in the conviction of three men with ties to Adidas.

Long said on Feb. 2, one day after the NCAA announced the suspension, that KU had “a commitment from (the NCAA) that they will move along as quickly as possible.” But as the Jayhawks head into another offseason, De Sousa’s future remains up in the air and there is no indication of when a ruling on the appeal might come.

He added: “There’s nothing more important to us than the student-athletes in our program and Silvio’s just an incredible young man. I’m so impressed with the way he’s carried himself and conducted himself and remained positive through this very challenging (situation).”

Despite missing the entire 2018-19 season, De Sousa remained a part of the Kansas basketball program in every capacity beyond game nights. He practiced with the team, traveled to road games, sat on the bench to support his teammates and continued to attend classes, tutoring sessions and workouts like any other member of the program.

If the NCAA upholds the suspension, Silvio should leave and go play ball in Europe. He doesn't need to suffer NCAA BS because of something his guardian may or may not have done.

At this point, it isn't really even a matter of may or may not have done.

The NCAA admitted/accepted that the he did not take the $60k. If anything, the "may have" is that Fenny allegedly thought about/agreed to accept the $60k, though there's no documentation of it accept the words of a convicted felon.

It's this latter part that is so crazy to me. It's not just giving gift when it's the thought that counts. I've generally not been opposed to the NCAA and their enforcement in the past, though there is plenty that is hard to defend. In this case though, it is just pathetic and juvenile.

Maybe it's time for KU to file a serious major lawsuit against the NCAA for discrimination in this case. Not race or sexual discrimination but discrimination by excessive penalty relative to other punishments for similar "infractions" by someone other than the player and without the player's knowledge. Someone has to step up and take on the NCAA in a big way or the NCAA is never going to change.

Based on what the guardian told the Kansas City Star, they should file a lawsuit. According to the guardian he asked Adidas for used shirts and shorts that could be sent to Silvio's home country. The $2,500 was sent as a check because Adidas didn't have any used gear. Knowing that accepting $2,500 was a violation the guardian claims that he signed the check over to a charity. He also went further to say that he has copies of everything that he can provided as evidence to show that the check was deposited in the account of a charity. He said the FBI and the NCAA never called him or asked him any questions about the $2,500. Who knows what is true and what is not true. KU should get a copy of his evidence and if it proves that the $2,500 was not used to purchase on-line courses for Silvio they should file a suite against the NCAA. It is time that someone stand up to the NCAA. They slammed the door on Silvio for two years! Yet you have a Head Coach who was recorded by the FBI saying to deal with him only with regard to the $100k paid to the center who now plays in the NBA still running a program with no punishment. How is that fair?

Doug, where are you getting this information. I've heard nothing about wanting used stuff.

Dan check out the article in the Kansas City Star https://www.kansascity.com/sports/college/big-12/university-of-kansas/article225440170.html

When has fair and the NCAA ever been used in the same sentence? The NCAA is not and never has been about fairness. It's about how to maximize profitability of young men to pay older men more money than ever before. In the 1970's football players played 10 or 11 games and a limited number of bowl games. In return they got books tuition, room and board. Coaches and AD's made upper 5 and low 6 figures. Today all kids play 12 games, while the better teams play a league championship, a bowl and/or possibly 2 more games to determine a champion. Guess what, the players still get books, tuition, room and board, but now the coaches and AD's make millions. So again, what's "Fair" about the NCAA? And before you think things are different in basketball, UCLA won the 1972 championship by going 30. This years champion will play 40-41 games. The brackets have gone from 24 to 64 teams, yet the players still get books, tuition, room and board. The NCAA is the mafia clothed in respectability by the MSM and our good old feelings about our alma mater.

Agree Mike Bennett. Pretty straightforward: too much money involved. Want to find the source of greed, deception, and cheating? FOLLOW THE MONEY. We all love to root for our various college teams and much good happens when young men and women play sports in college. But altruistic notions get thrown aside when the money swells to the levels seen currently.

" Pretty straightforward: too much money involved. Want to find the source of greed, deception, and cheating? FOLLOW THE MONEY" -- David Brown

True words. And that trail will also lead to NCAA admin/staffers. With all that money floating around you can't convince me that some NCAA employees haven't dipped into that honey pot to influence their decisions. Evident by the wildly different outcomes for very similar situations.

Thus in total you would have given him a half season and taken away a season and given him another half season spread out over three seasons. Add on a full season in 2020-21 and he gets a total of three playing seasons in four years. It would be like he took a red shirt year then left early.

CRAP!!! I typed this and I can't figure it out!! There is no fair way that the NCAA can handle this. My proposal would at least try to mitigate the punishment.

I feel bad for Silvio...that kid has had such a positive attitude despite what he has gone though...if the NCAA doesnt budge on his eligibility then he should go to Europe and begin his career....whats being done to him isnt fair..its the NCAA trying to give the image that they have control

IDK what the timeline is but the draft is coming up. Silvio can't wait for the 2019-20 season to start while the NCAA is still dicking around with this.

This all goes back to Cam Newton, and his uncle or dad or somebody getting the money, The fact is Silvio got nothing except suspended for 2 years. I believe it is the worst penalty to a player ever who was simply not ruled ineligible. Also it is a way of taking a scholarship away from KU.

This punishment is not fair, and not right. Perhaps KU should go to court and fight at least the total bogus severity.

Please educate me on the "Cam Newton" Rule! I believe players are now punished if their parents/guardians are paid money, no matter what!

My question is whether the Rule is retroactive? Can the NCAA punish Silvio because Fenny took $50,000 from a Maryland booster (Gassnola testimony) for a verbal commitment from Silvio? Shame on the NCAA!

After the National Championship game where Cam Newton was allowed to play because he said he did not know his dad was asking schools for $200K for him to transfer to their school from Florida. The NCAA closed the door on this loop hole by saying the player doesn't have to know if a family member or guardian or anyone on their behalf makes a deal like this.

I respect your resolve Silvio but your too good to just be sitting on anybody's bench.

With respect to Silvio and how he has handled everything and how unfair the NCAA has been, if they can't get him reinstated for 2019-2020 season and soon, he needs to leave and go to the draft or go play Europe ball and then the developmental league. There is no point in the best interest of either party ( KU and Silvio) to keep him sidelined on the bench for another full season. The one angle I can see for him to stay is to get his degree, but other than that, let him graduate and go off into the world. He has suffered and been punished more than enough for something he didn't even do.