Sensing a Silvio-type emergence from KU forward David McCormack? You're not alone 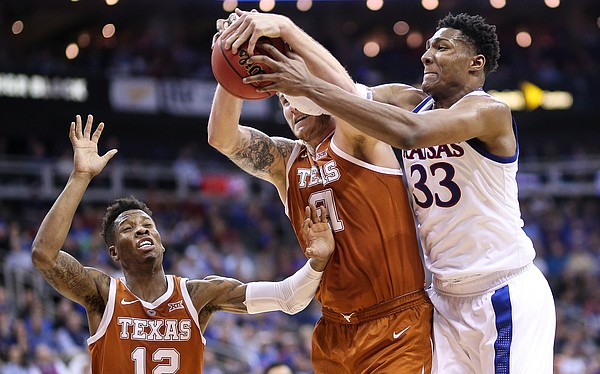 Kansas freshman David McCormack calls it “sort of an unspoken thing” and junior forward Mitch Lightfoot says you’d have to be crazy not to see the parallels.

Regardless of how you classify it, if you find yourself wondering, dreaming or even just contemplating whether McCormack could be to this year’s KU team what Silvio De Sousa was to last year’s, you’re definitely not alone.

“Yeah, you’ve got to think about it,” Lightfoot said of the obvious comparison. “Coming on at the same time, right when we need him. He’s done a great job and if he can give us even a little bit of what Silvio gave us... (Silvio) played his butt off in March (last year) and I think Dave has all the ability to do that.”

Filling in for the injured Udoka Azubuike — sound familiar? — De Sousa staged a coming out party in last year’s Big 12 tournament, averaging 20 minutes per game while scoring 30 points on 14-of-18 shooting (78 percent) and grabbing 29 rebounds in three games while helping Kansas take the tourney title.

McCormack, after his 13-point, 9-rebound effort in 29 minutes against Texas on Thursday night, is actually slightly ahead of that pace in many areas and on track to score 39 points (on 86 percent shooting), grab 27 rebounds and play 27 more minutes than De Sousa did at last season’s Big 12 tournament.

Sure it’s just a one-game sample size. But McCormack proved Thursday night that, like De Sousa did in three Big 12 tournament games last year, that the postseason stage is not too big for him. In fact, it might bring out the best in him.

Playing more minutes is an obvious way to grab more stats, but you still have to deliver when you’re out there. And few Kansas players have delivered of late the way McCormack has during his nine-game starting stretch.

The numbers, the confidence, the presence and the joy all have transformed McCormack into an almost unrecognizable player. It’s almost as if he’s the kind of player who couldn’t stay on the floor for even a minute without making three mistakes midway through conference play and now is a critical part of KU’s postseason hopes.

McCormack said he has not yet talked much to De Sousa about the role he played late last season and hasn’t heard much advice from De Sousa either. But he doesn’t feel he needs it. That’s where the whole “unspoken” thing comes into play.

The 6-foot-10 McCormack said he has felt the 6-9 De Sousa’s strong support, in practice and from the bench, throughout his freshman season. And it’s clear that, whether they’ve talked about it or not, McCormack has at least picked up how to approach this opportunity from observing the way De Sousa has continued to battle in practice even while serving an NCAA suspension.

How many opportunities lie ahead this season for McCormack and his teammates remains to be seen and could very well depend, at least partly, on whether the freshman forward continues to be the kind of presence he has been during the past couple of weeks.

Lightfoot likes that idea and believes the Jayhawks will continue to benefit from McCormack’s play both in terms of the numbers he puts up and the example he sets for how to exhaust everything you’ve got in the tank and then keep playing.

“The kid’s playing his butt off,” Lightfoot said. “He wants it so bad and you’ve really got to respect that. He really showed us something (Thursday night) and I couldn’t be more proud of the kid.”

Added KU freshman Quentin Grimes, when asked what he liked most about McCormack’s game right now: “Just how active he is. If he misses a shot, he doesn’t care, he’s going to go for the offensive rebound. On the defensive side, he’s going to try to get every rebound. So you can’t complain when a guy plays that hard.”

Next up, another matchup with West Virginia, a team that plays big and should inspire KU coach Bill Self to put McCormack out there for more De Sousa-like minutes.

Tipoff for tonight’s Big 12 tourney semifinal with the 10th-seeded Mountaineers at Sprint Center is slated for approximately 8:30, 30 minutes following the other semifinal matchup between No. 5 seed Iowa State and top-seeded K-State.

No Sh** I've been saying this since Dok went down and HCBS decided not to play him. IMO, it was BS to say Mac could not guard or play against KSU and so KU changed to 4 guards. KU should have started Mac from the get go and suffered through his growth. KU would still be in the same position as now with as many wins.

That's funny, but is missing the sarcasm font.

Obviously we would still have the same record, because if we were getting less production with Mac in the lineup we still would have won @ BU (+5), vs UT (+2), vs ISU (+4), vs TCU (OT). To the less perceptive eye that looks like 4 more L's to me. Sure am glad we have a HofF coaching leading the way and not someone with a lot less coaching experience.

Every player should be playing with the same passion and enthusiasm as he does. Its a part of being on the court and having the skills to be there and the heart behind it.

McCormack has progressed nicely and right in time for the Post-season stretch. And yes, it's very similar to what the Jayhawk fanbase experienced a season ago with DeSousa. I have no idea as to how far this team will go this year. However, I still see a lot of struggles in the back-court with Agbaji and Grimes. Yes, Grimes ended up with nice numbers at the end of last nights game. However, both Agbaji and Grimes look like they're still thinking to much about their long range shots. Agbaji wasn't playing that way (when the red-shirt was pulled). But now, it seems that Agbaji is playing tight. Once Agbaji and Grimes get over this issue, their potentials are unlimited. I think Lightfoot long range shooting suffers from the same confidence fact (as Agbaji and Grimes). They all 3 can shoot the long range shot. But, they need to have confidence in their shooting abilities. Exciting future lays ahead for Jayhawk Nation. RCJH!

I couldn't agree more, especially Agbaji. He looks tight, hesitant to shoot, and tentative when he does. I thought he played much better when Garrett was out, it didn't seem like he was overthinking then. He passed on some fairly open shots last night. Grimes just hasn't refound the touch that got him here and that he had over the summer. His problem isn't as easy to get a handle on. Mitch, well he just needs to make some short shots to get some confidence in the longer range game. And he needs to still put on more mussel, he gets pushed around a lot down there among the big boys.

Speaking of Silvio, how is it that LSUs Smart is cleared and playing after 1 week when it took months to vet Silvio and now he’s out 2 years!

David, you bring up a very valid point.

I missed the 1st half of championship game, what happened to McCormack? Why is he on the bench most of the time?