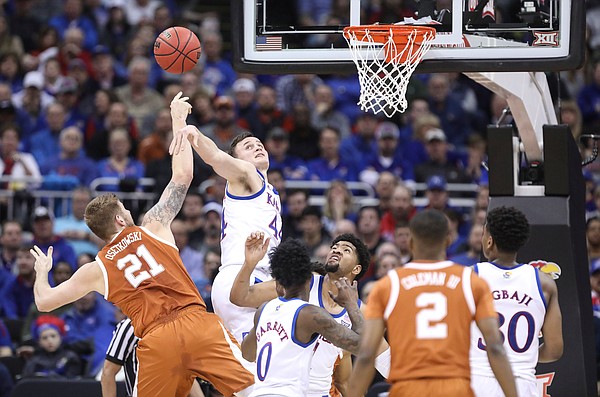 Kansas City, Mo. — Whether you’re new to Mitch Lightfoot’s world and discovered him through his “Prison Mitch” alter ego, or you’ve known about his timing on blocks, heart on rebounds and passion for the game for years, you probably feel like you have a pretty good read on Lightfoot’s game.

And then the junior from Gilbert, Ariz., goes and does something like he did on Thursday night during KU’s 65-57 Big 12 tournament quarterfinal victory over Texas and throws off everything you know about him.

Yeah Lightfoot grabbed a few key rebounds in traffic. Three of them to be exact. And, yeah, the blocks were there in this one. Three of those, as well, including one, on UT guard Royce Hamm Jr., when it looked like Hamm had nothing but clear air between him and the basket and Lightfoot crashed his air space and changed all of that.

But there were two plays Lightfoot delivered in the first half of Thursday’s victory that had nothing to do with playing the ball in the air and came far away from his more familiar work environment of the painted area near the basket.

Both forced Texas shot clock violations and both came when Lightfoot switched onto a different Texas guard and slid his feet well enough to stay in front of them and keep them from getting to the rim.

“I feel like I’d kind of gotten away from that earlier this year,” Lightfoot said of his swift sliding on Thursday night. “My feet were a little bit slow for a little bit. It was just a matter of me locking in and paying attention to the scouting report.”

For that, Lightfoot credits KU assistant Jerrance Howard, who handled the scout for KU’s Big 12 tourney battle with Texas and had Lightfoot prepared for every change of direction, every favored hand and every fancy flash that the Texas guards could throw at him.

“You have to look at it all,” Lightfoot said of scouring every inch of the scouting report for Texas. “Because, if it comes down to one or two possessions and you don’t get a stop on the switches and solids, that’s big. I would just say my teammates did a great job of getting in help (defense) and allowing (them) to feel a little bit of pressure and that allowed me to keep them in front.”

Asked if he received any feedback for the subtle plays that helped keep Kansas tied with Texas at the break and set the stage for KU’s 36-28 edge in the second half, Lightfoot said Howard was particularly fired up about both stops.

“They voice their appreciation for it,” Lightfoot said sheepishly before cleaning up his language to convey Howard’s message. “Coach Howard came up to me and gave me a good slap on the chest and said, ‘Great stuff, baby.’ He was excited about it, it was his scout and he did a great job getting us prepared for it.”

That attention to detail moved Kansas into Friday’s semifinals, where the Jayhawks will face 10th-seeded West Virginia at approximately 8:30 p.m. for a trip to the title game on Saturday.

That's awesome stuff; thanks Matt. And it's yet another reason why Mitch is one of my (and pretty much every KU fan's) favorites.

It's gotta be fun to be Mitch these days....