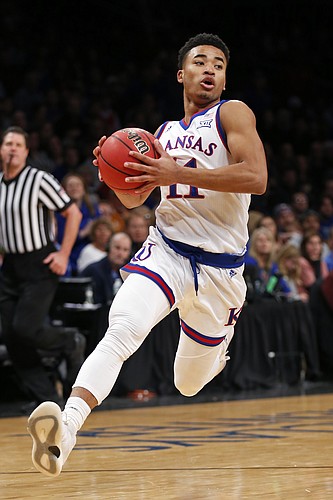 Kansas guard Devon Dotson drives to the basket against Tennessee during the first half of an NCAA college basketball game in the NIT Season Tip-Off tournament Friday, Nov. 23, 2018, in New York. (AP Photo/Adam Hunger) by Associated Press

It’s been a little more than a month since Kansas freshman Devon Dotson made the big announcement that he was returning to KU for his sophomore season.

And given just how massive that news is for the 2019-20 Kansas basketball program, it’s worth celebrating it the way junior high kids in relationships tend to celebrate their anniversaries — by the week, to the day or even on the hour would all be acceptable.

That’s how important Dotson’s return is for the Jayhawks, and one need look no further than one key stat from his freshman season to see that in crystal clear fashion.

Not counting Dotson — or Aaron Miles, who KU coach Bill Self inherited — there have been eight other players who have consistently played point guard for Self during his time at Kansas. And not one of them, as a freshman, even came close to playing the kind of minutes that Dotson did during the 2018-19 season.

Former KU great Tyshawn Taylor, a true freshman during the 2008-09 season (on a loaded team, no less), came the closest. But even he was 240 minutes shy of matching Dotson’s total of 1,168 minutes a season ago.

Put in even more mind-blowing terms, Dotson played more minutes at the point during his freshman season than soon-to-be-All-Americans Frank Mason III (565) and Devonte’ Graham (517) played during theirs combined.

Here’s one more: The average number of minutes played by a freshman point guard at Kansas in the Self era is 536, with Taylor (928) and Sherron Collins (847) on the high end and Naadir Tharpe (175) and Elijah Johnson (151) on the low end.

Granted, the makeup of each roster had a lot to do with Dotson’s load and the lighter work handled by his predecessors. And, in Graham’s case, the mere presence of Mason in the class ahead of him, limited his early opportunities.

But, still. No Self-era point guards played anywhere close to the kind of role that Dotson played a season ago, a fact that merely adds to the excitement surrounding Dotson’s immediate future.

“It helps a lot, me coming in and coach believing in me and sticking with me,” Dotson recently said of the heavy workload he received as a freshman. “It helps a lot going into this year. I know what to expect, I know what it takes to win out there at a high level and I’m ready.”

I initially limited this glance to KU freshmen because that’s exactly what Dotson was a season ago. But as I kept pounding away at the keys, one thought kept creeping into my mind. Forget freshmen PGs, how many point guards period during the Self era at Kansas played those kinds of minutes for the Jayhawks?

The answer? Five players, eight times, including one during each of the previous four seasons, when Frank Mason’s minutes went up from 1,207 to 1,272 to 1,301 during his sophomore, junior and senior seasons, and Devonte’ Graham played a whopping 1,474 minutes during his stellar senior campaign.

Part of those totals have to do with games played, though. Remember, Mason’s last two seasons ended in the Elite Eight and Graham, in his lone season as KU’s only point guard, reached the Final Four.

If Dotson’s Jayhawks had played even just two more games, his total minutes for his freshman season — factoring in his average minutes per game — would have reached 1,233 and been the fifth most by a Bill Self point guard in the last 16 seasons at Kansas.

Dotson’s case is interesting because of the era in which we live. Fans across all sports constantly want to say this player is the next so and so or that player is on pace to be this guy. And while the comparisons can be fun and often are a good way to track a player’s progress, they’re not always a case of comparing apples to apples.

Take Dotson for instance. If he were to stay at Kansas for four seasons like Graham and Mason did he would be a near lock to wind up on their level. But with the smart money being on Dotson turning pro after the upcoming season, it’s hard to know if Dotson, at Kansas, will ever produce like Mason and Graham did before him. Age, maturity, experience and opportunity all played a huge role in those two becoming All-Americans.

First on the team in assists, steals and games played and seven minutes shy of tying for the team lead in minutes played, — as a true freshman, remember — Dotson inherited a monster role from Minute 1 and only saw it gain importance as his freshman season went on.

The same should be true in Year 2, and maybe then it will be easier to start stacking up Dotson against some of KU’s all-time greats.

For now, all that matters is the fact that Dotson is the best point guard on this Kansas roster and one of the best in college basketball, both of which figure to be key factors in what the Jayhawks hope will be a memorable 2019-20 season.

Here’s a quick look at the ranking of minutes played per season by the Jayhawks' primary point guard in each of Bill Self's 16 seasons at Kansas:

Hats off to Devon, but part of the reason he played so much in 2018-19 was that Grimes was a bust instead of sharing minutes with the ball as originally intended. With Devon back, Grimes gone, our stable of bigs that he didnt have last year, and plenty of good guards, the sky is the limit for the Hawks this year.

Elijah Johnson gets a bad rap too often. In 2012, he was great as a shooting guard. Originally listed as a PG or a combo, he was forced to play EJ at the point instead. That or Tharpe.

I agree. He played 1,254 minutes that season on a team that ended up in the national title game. He was a huge part of that and took one for the team to try to play PG his senior year. He did it pretty well considering he had watched Tyshawn play it for the three previous seasons.

I'll 2nd/3rd that. He was asked to do things he probably shouldn't have been asked to do. He did well considering.

And his game in Ames against the Cyclones is still one of my all time favorite Jayhawk performances.

Dang, I wish Devon would stay at least through his junior year. But maybe getting to the league after 2 will help us recruit other elite PGs.

wow, 32 minutes is ALOT.Hopefully that does not have to go up this year, would be nice if we could get it down to 30.

Dotson’s minutes will decrease this season. This team has tremendous depth and talent, and not just with the ‘Bigs’! He will get a lot more rest, especially in games where we are dominating (and there will be plenty of those games)! When this season is done, people may say it was as deep (or deeper) than the 2008 team! Hopefully they will have the same results! I’m a Believer!