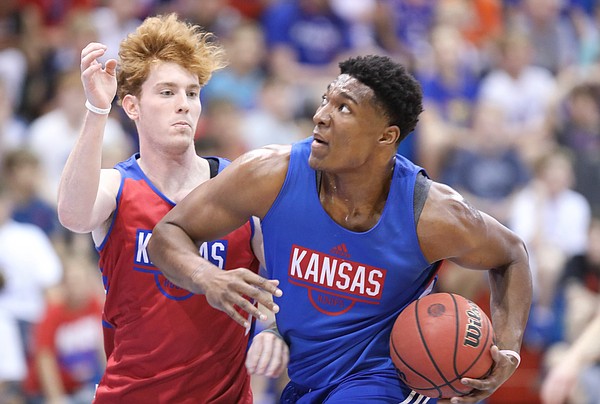 Kansas forward David McCormack drives to the bucket against Kansas guard Chris Teahan during a scrimmage on Tuesday, June 11, 2019 at Allen Fieldhouse. by Nick Krug

Former walk-on Tyler Self played just 95 minutes in 45 games during his five-year Kansas career and, outside of a memorable 3-point shot in the 2017 NCAA Tournament, very few of them produced any kind of lasting memories.

But after paying his dues and staying out of the way as a freshman and then slowly but surely building his body and his maturity during the next couple of seasons, Self emerged as an actual leader during his senior season.

Ten Jayhawks played more, did more and drew more attention that season. But in the few instances we were able to grab a behind-the-scenes look at that team, it was Tyler Self who constantly pushed his teammates and made sure things ran smoothly, refusing to settle for half-hearted efforts and anything less than the best from his teammates and the program.

That’s what happens when players mature, and Chris Teahan is experiencing a similar transformation today.

“I started to realize that more toward the end of the season,” said Teahan, when asked if he felt any movement toward a position of leadership on last year’s young and inexperienced team. “Me going up to them and telling them something to do, most of the guys are younger than me so I can sit there and have a good conversation with them and they’ll learn something from me, where I didn’t feel comfortable doing that with Devonte’ (Graham) and Svi (Mykhailiuk) for obvious reasons.”

Among those reasons were the fact that Teahan was just a freshman when that dynamic duo played for Kansas. And as a freshman, and a walk-on, he figured it best to fall in line, do what was asked and follow the yes-sir, no-sir approach to playing basketball.

But as he found his footing and started to feel more comfortable with his place on the team and how things were run, Teahan slowly started looking for opportunities to make an impact, however big or small it might have been.

That alone made Year 2 more fun than Year 1. And now that he’s set to enter his junior season, Teahan is ready for more. Whether that comes in the form of increased minutes or added respect and credibility as a leader, Teahan will take it.

“That’s still driving me for sure. That’s my ultimate goal,” he said of finding a way to up his minutes. “If I can get on the court next season, that’s what I want to do. I’m going to work hard this offseason to do it, and if it doesn’t happen I’m going to work even harder the next offseason.”

No matter what happens with his playing time, that attitude figures to benefit Kansas in several ways. It could help in the leadership department, where Teahan, like Self before him, will help set the tone and the baseline for what kind of work needs to be done on a daily basis. It could help push KU’s rotation players to be their best day in and day out. Or it could wind up leading to the time on the court that Teahan covets.

“I’ve done a lot of shooting, just making sure my shot’s consistent and been working on all facets of my game,” he said.

Asked what one thing might be most crucial in his quest for minutes, Teahan smiled sheepishly before answering.

Whatever happened to the story where the NCAA was going to throw the book at 3 major Division I programs before July was over?

Where did that go?

"Although no programs have been named, Wilcox said two “high profile” programs would receive notices of allegations by early July. The other four programs should expect notices by the end of the summer, and the NCAA official said other cases are still in the works."

I'm sorry Joe, have you been following along for the past several years? NCAA meeting a deadline is the definition of an oxymoron.

NC State is one of the two high profile programs and even though they have not officially named the second it appears to be Auburn.