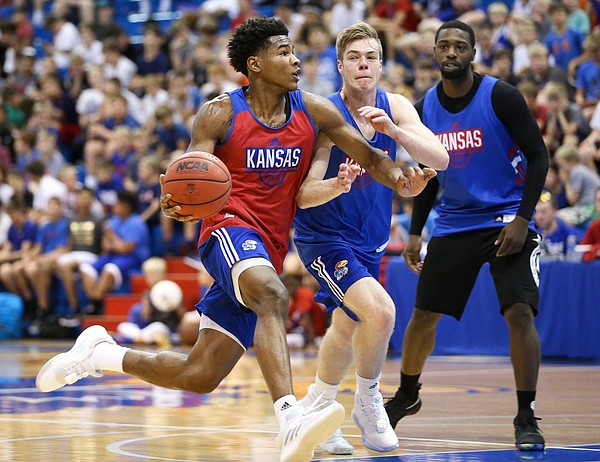 Kansas guard Ochai Agbaji (30) goes hard to the bucket against KU walk-on Michael Jankovic during a scrimmage on Tuesday, June 11, 2019 at Allen Fieldhouse. by Nick Krug

A couple of current Jayhawks recently spent some time in Southern California, showing off their bodies and abilities at the annual Nike Skills Academy.

Dozens of pro scouts were on hand to watch the select group that included KU sophomore Ochai Agbaji and senior Udoka Azubuike run through drills and play organized pick-up games.

More than a few media members were there, too. One of them was Rivals.com’s Corey Evans, who wrote a little about what he saw from the two Jayhawks, both of whom are projected starters in the 2019-20 lineup.

“He didn’t have a tremendous camp but whenever it comes to the immediate eye test, many were stumped at how Agbaji was a potential full-year redshirt candidate at Kansas last year. He still showed that he has more room to grow before he settles into the off-guard spot that could ultimately be his long-term position in the NBA. However, Agbaji is a Herculean figure at 6-foot-5 and just over 210 pounds. He should be Kansas’ primary lock-down defender next season.”

By far the most interesting bit of information from this recap is Evans’ belief that Agbaji not only could be but actually “should be” KU’s primary lock-down defender this season.

Remember, the Jayhawks do still have Marcus Garrett and Garrett has proven himself for two seasons now to be as solid as it gets on the defensive end, guarding bigger players, smaller players and guys his size.

I would take Evans’ read on Agbaji more as a compliment to Ochai than a knock on Garrett. It’s possible that a bit of recency bias is at play here and Evans merely overlooked Garrett while writing his recap. It is still August after all. But if Agbaji really has progressed to the point where anyone believes he will be a better defender than Garrett, we could be looking at an all-time breakout type of season from the sophomore from Kansas City, Mo.

We already know what Agbaji can do on the offensive end. And the expectation — according to many who have been around him this summer — is that he improved his game in a number of facets during the past few months and will be an even better offensive player than we saw in half a season a year ago.

If his defense has elevated to the point where it’s on par with his offensive ability, Agbaji is going to be some kind of handful for KU’s opponents this season.

Now, on to Evans’ take on Azubuike:

“The last time that most of us heard about Azubuike, it was regarding the ligament tear that he suffered in his right hand that ultimately led to the redshirt being taken off of Ochai Agbaji. Back and fully healthy, Azubuike still has a ways to go in the skill department, but when it comes to rim-running, dump-off dunking and rebounding, not many do it better than the Kansas star. This all is enforced further by his 7-foot-8 wingspan. A plus-nine wingspan on a center that weighs more than 275 pounds and competes on each possession is difficult to stop at the college level. Questions continue to circulate about his ultimate fate at the NBA level, but that shouldn’t stop his efficiency numbers from soaring at KU this winter.”

Not a whole lot new here other than an oh-my look at just how big Azubuike really is, from his body and frame to his length and wingspan.

The first thing that came to mind when reading about that plus-nine wingspan was that Azubuike really should be a much better shot blocker than he has been during his first three incomplete seasons at Kansas.

Forget the two seasons when he barely played, let’s just look at the one he did.

In 36 games during the 2017-18 season, Azubuike blocked 60 shots in 23.6 minutes per game. That’s an average of roughly 1.7 blocks per game, which was not even half of what the national leader averaged that season and a far cry from cracking the Top 10, which would’ve taken 2.9 bpg. According to last year’s stats, 1.7 blocks per game would have placed Azubuike 74th nationally.

None of this should come as much of a surprise if you’ve watched Azubuike play. He has not proven to be an explosive jumper, has had a hard time avoiding fouls and generally blocks shots off of his sheer size rather than via precision and timing.

But, still... with a wingspan advantage of plus-nine, it’s not unrealistic or even unfair to expect Azubuike to block more shots and this very well might be the year he does it.

And with greater commitment to his conditioning and another year of maturing under his belt, Azubuike may be in line for his best all-around season yet. A career-high in blocked shots should be a part of that equation.

Doke hasn't blocked that many shots because he has usually been playing in foul trouble with very little depth behind him. This year is a little different, our bigs being deep means they can all play at 110% every second they are in the game, no need to save energy or fouls for later minutes. I'm excited! If the injury bug stays away this year, the sky is the limit for this group.

If Doke has dedicated the effort and time into improving his free throw shooting, his scoring average goes up 3-5 pts per game from that alone and more importantly allows him to be playing in the final minutes of close games.

Garrett wasn't at the event and I am pretty sure the scout wasn't thinking about other players when evaluating Agbaji. I expect Agbaji and all the other returning players to be improved in areas they needed to work on this next year. Garrett may be more active offensively who knows. But, Dok should be a beast.

This team kind of reminds me of the UK team when Calipari just subbed out a different 5 players every 10 minutes. Everyone got to play 20 minutes per game. I wouldn't say KU necessarily has players that will end up NBA All Stars but KU really does have a lot of players with NBA potential in general and it will be hard to give them all the playing time they deserve.

You're correct. Garrett wasn't at the camp. And I don't claim to know what Evans was or wasn't thinking about while evaluating Ochai.

But by writing that he believes Agbaji "should be Kansas' primary lock-down defender" this season, he's clearly talking about the whole team and the entire roster. It just surprised me that Agbaji was mentioned as a better defensive option than Garrett.

Maybe it'll turn out that way. Maybe they'll be equals. Should be a lot of fun finding out.

Coach Self made a comment in year 2 I think that they noticed Dok picking up fouls as he was getting tired in extended minutes because of the lack of depth behind him. With the depth on the frontline that we have extended minutes shouldn’t be a problem.

The other factor that works against Dok wrt blocking shots is that it’s so much about timing and he just doesn’t have as much experience in that regard.

His shear size would also seem to work against him. It’s not like he’s some skinny white kid that can sneak up on shooters or blend into the spectators/inmates before making a rejection.

At least the first two should all be better for him this year.

"It’s not like he’s some skinny white kid that can sneak up on shooters or blend into the spectators/inmates before making a rejection" What does the color of his skin have to do with anything?

"blend into the spectators," suggests Dirk thinks there is an element of camouflage that comes into play (smaller player, blending into the background). Whether that's the case or not, the comment seems based on visual perception, not on race.

However, I am unclear as to his "inmates" reference.