Updating KU's transfer numbers under Bill Self, with 2 more Jayhawks on the move 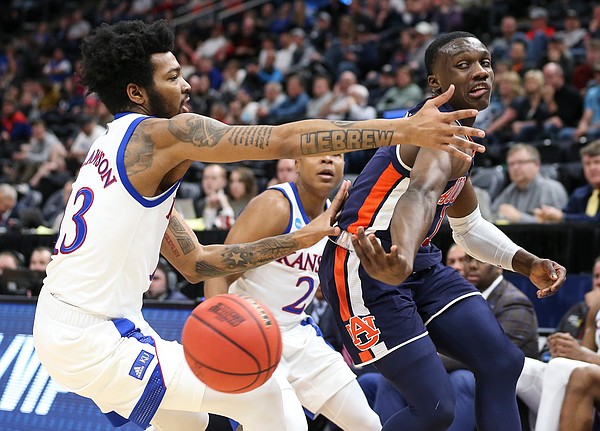 Over the past couple of years, as the transfer trend has become more prevalent with the Kansas basketball program, I’ve done periodic updates on what the transfers-in and transfers-out situation has looked like during Bill Self’s time in charge of the program.

Today, however, after the recent news of a pair of current Jayhawks transferring out during the upcoming offseason, we’re looking at a third category altogether and one that is as interesting as it is a head-scratcher.

That news, of course, which came in a 6-day span, is that sophomore guard Charlie Moore and redshirt sophomore K.J. Lawson had entered the transfer portal and were leaving KU.

Both moves make sense. Neither came as much of a surprise. And both players figure to gain what they’re looking for by joining another program.

That list is still relatively small, but it’s growing. And thanks to this most recent transfer news, that group now has four members — Moore and K.J., former KU guard Sam Cunliffe and former KU power forward Dwight Coleby.

This transfer movement is certainly not limited to KU and head coach Bill Self. Programs big and small, all over the country, are taking more and more transfers on an annual basis, with the grad transfer route fueling the recent spike.

A recent proposal to change the rule for the grad transfer system, which would require programs to give grad transfers a scholarship for two years if they’re in a 2-year graduate program — even if their eligibility runs out — remains on hold. If passed, it likely will have a significant impact on the number of grad transfers hitting the market year in and year out.

According to a recent NCAA study, roughly 80 percent of grad transfers, across all sports, enroll in 2-year programs at their new schools.

Beyond that, the mere fact that we now have something called the “transfer portal,” which is little more than a massive data base for coaches and athletes to keep track of available transfers is an indication of where things have gone with the transfer route nationwide.

With that in mind, here’s a look at the updated list of transfers — from one Division I program to another — at Kansas during the Bill Self era:

The only real "loss" on that list of OUTS was Daddy Smooth Dwight Coleby. Had he stayed we would have won a Final Four last year. The rest, while KJ is a feel-good graduation story, were all cannon fodder. The point this year will be the sheer numbers of leaving players and how do you refill that in one year and have viable practices/games. I'll be the first to say it... The End of the 30 straight NCAA appearances is on the horizon barring a miracle.

That sounds like a 'the sky is falling' prediction and I am afraid I don't see it that way.

I agree, unless we accept that Bill Self is a miracle coach at KU. If Texas was being discussed as a potential NCAA team with a 500 record, KU will be able to continue the streak. I know they beat UNC and had a couple other good wins, but they didn't have nearly the record KU did nor did they have the tough schedule.

When's the trade deadline? Does anyone know where we stand with the salary cap this year? If we trade both our Lawson's, can we get another one-year wonder with all the richness and meaning of, say, Kelly Oubre? Nothing keeps me warmer at night than knowing his 5 months at Kansas were more meaningful than his trip to Sunoco for a Slurpee and some Beef Jerky last Sunday.

Our new Chancellor showed tremendous guts in making the easiest decision since not looking directly into the sun (by firing neat deal). I wonder if he has what it takes to say this is an embarrassing mess? Since when does Kelvin Sampson own the high ground?

Major Milk Toast will not have what it takes to rid us of this plague and start anew. Roster management has always been a problem for Self. He walks by a storefront and say "I want that" and then gets home and realizes it doesn't work. Time for the childishness to stop.

Have you been drinking again?

The question is, whose ass is he sniffing?

The numbers might not look so good but in terms of talent I'd say the players coming in and having meaningful, productive minutes has eclipsed the talent leaving by a considerable margin.

Of course Malik Newman was a transfer who stayed and numbers are not as important as quality. When a person transfers to another athletic program it is a leap of faith. You better land on the ground running. And you better maximize the practice year to the max.

It is often fool's gold.

Hopefully, if necessary, we can add to this list with 1-2 grad transfers with the type quality TTU picked up in Mooney & Owens.

I m betting Bill won't be there next season regardless of how the roster looks. I d be glad to be wrong but I think trouble is coming and he knows it.

why in hell wouldnt Bill be here next season? NO, he isnt bolting for the NBA..NO, he isnt being fired, NO he isnt resigning

I have no idea why Charlie Moore was even on this team.....Or even on any D-1 team for that matter. I guess scouts and coaches are allowed bad decisions......Just as players have bad games.

thats a very cruel assessment..I think Moore is a lot better than what he showed this season..maybe the system Self runs didnt fit him?

Not my intention to be cruel. Just factual. You could be right about the system-that may be part of it........But he just looked completely lost. I have been a KU fan for 45 years. I have never seen a player struggle like him. Maybe he can find a better fit.

it isnt factual that he might not be D-1 material...the PAC 12 might not be the toughest conference but its still full of D-1 talent.....

i think i read that 40% of all players transfer by the end of their sophomore year. it's a nationwide trend and has little to do with KU specifically.

No surprise here. We knew that Zion was going to the highest bidder.

But don't count on anything to come from this. Coach Ratface will get away with it just like Obama and Hillary have gotten away with all their criminal activity during their time in power.

I am no fan of K. I especially don't love his self-righteous talk about "leadership" when he usually wins simply because he has the best players. But you don't have to drag politics into it. One of the reasons I read comments here is because they are generally not political. Please leave it for another forum.

I have no doubt that Duke and UNC are just as involved in this as anyone else but I have yet to read any stories that link Roy or Coach K directly to the scheme in the way Bill Self is. They can always claim they were unaware of the payoffs. Don’t think Bill has that luxury.

On an unrelated note, it was satisfying to Auburn and their scummy coach lose in heartbreaking fashion - even if a missed double-dribble contributed to the Tigers' demise...

No fan of Auburn but I HATED the missed call. Makes college basketball look like professional wrestling when they miss such an obvious violation at a crucial time in the game. This is up there with the pass interference missed call in the NFC playoffs.

Love the timing on the Zion payouts AFTER he played the whole season, when ppl have been asking all season why has Duke not been investigated. Hopefully this fresh news makes it a easier decision for Matthew Hurt to choose KU. Dedric announcing also helps his decision but I don't want to lose Dedric. Dok has to stay too. Grimes not ready for NBA but he never seemed comfortable out there and hoping Vick and KJ gone inspires him to take over at KU.

Maybe Duke is not being investigated because their coaches are not dumb enough to have their calls taped. And by the way Hurt and other recruits lean away from us because of all the investigations

i dont think the investigation plays as big of a part in that as you think..Arizona is way more entangled in the FBI fiasco than KU is..they actually had an assistant coach caught, fired and tried in court AND their HC is thought to be directly involved and they STILL signed the top incoming class..hell, KU even lost out on a player TO AZ...I think its more that Self is just having an off recruiting year

Matt, correct me if I am wrong, but scholarships are granted for 1 year and can be renewed annually. Many of the transfer outs were Self not renewing the scholarship or stressing how much playing time they might get the following season. Hopefully, Self is clearing some space to add additional players (graduate transfers and hopefully Hurt) who can address some of the glaring weaknesses which will be augmented when Dedric leaves and if Udoka, DeSousa, and Grimes are all gone.