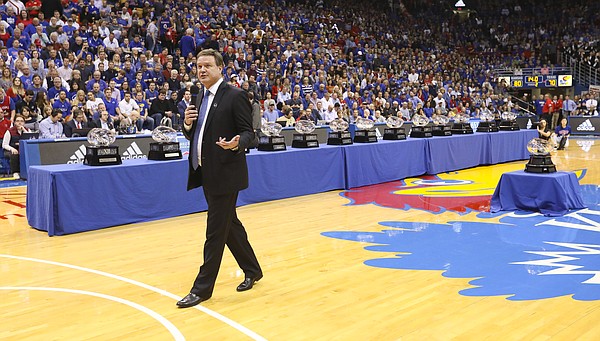 Kansas head coach Bill Self lauds his players before 14 Big 12 conference championship trophies during the celebration following their 80-70 win over Texas on Monday, Feb. 26, 2018 at Allen Fieldhouse. The win gave the Jayhawks an outright win of their 14th-straight Big 12 Conference title. by Nick Krug

The wait is over, KU basketball fans.

OK. Not that wait. For that one, you’ve still got 23 days. But, hey, not bad considering that this year’s Late Night in the Phog is earlier than ever and will, once again, mark the official beginning of the 2018-19 Kansas basketball season.

The wait we’re talking about today is the wait for the KU men’s basketball schedule, which finally was released by the Big 12 Conference on Wednesday morning.

Not only do you now know times and dates, but you also have a complete look at KU’s entire schedule — the nonconference stuff came out in June — and can get a better feel for how the road will look for the Jayhawks as they try to make it 15 Big 12 titles in a row and back-to-back trips to the Final Four.

With that in mind, let’s jump in and quickly rank KU’s 18 Big 12 games in order from easiest to toughest. Remember, that Big 12/SEC Challenge clash with Kentucky is thrown in the middle of the conference season. But for this exercise, we’re just talking Big 12 games.

For what it’s worth, I’d rank KU’s toughest nonconference games like this: 1. Kentucky, 2. Michigan State, 3. Tennessee, 4. Villanova, 5. at Arizona State.

18. vs. Oklahoma, Jan. 2 - The Jayhawks have won 27 consecutive conference openers and will be playing at home in this one. Beyond that, OU is without Trae Young and will have to confront the demons of a 104-74 beat-down the last time they were in the building.

17. vs. Baylor, March 9 – Senior Night, in what will be the last home game of Lagerald Vick’s career and figures to be the last home game in the careers of Udoka Azubuike, Quentin Grimes, Dedric Lawson and possibly others. Hard to imagine KU laying an egg here, particularly against a Scott Drew-led team that historically has struggled in Lawrence.

16. vs. Oklahoma State, Feb. 9 – The Cowboys were not particularly big last year and lost their most productive inside player in Mitchell Solomon. That fact, against this Kansas team, could be a nightmare for OSU.

15. vs. TCU, Jan. 9 – The Frogs are down a bit this season and already are dealing with another injury to big time point guard Jaylen Fisher. He’s got plenty of time to heal and Jamie Dixon will have them ready. But Allen Fieldhouse will be too much.

14. vs. Iowa State, Jan. 21 – The Cyclones were awfully close to winning in Allen Fieldhouse a year ago and, led by Lindell Wigginton, could put another scare into Kansas this year. But the Jayhawks' size and home-court advantage should carry the day.

13. at Baylor, Jan. 12 – Punked by the Bears in Waco a season ago, KU will surely have that and revenge on its mind heading into this year’s rematch. Still, a road game in the Big 12 is never easy and this one comes right before a Big Monday battle with Texas back in Lawrence.

12. at Oklahoma, March 5 – Based on personnel, this one should be lower on the list, as the Sooners appear to be in a rebuilding mode. But because of where it comes on the schedule, this one could be tougher than people think. Late in the season, when the Big 12 race should already be locked up and on the road, right before Senior Night back in Lawrence. That’s an easy one to overlook and Lon Kruger could have his team clicking by this point.

11. vs. Texas, Jan. 14 – It comes early and it’s sandwiched between road games at Baylor and West Virginia, but the UT roster is impressive enough to land this one in the middle of the pack, even if Shaka Smart has been completely overmatched during his first few trips to Allen Fieldhouse.

10. at TCU, Feb. 11 – Big Monday, right before a KU-West Virginia showdown back in Lawrence and against a Jamie Dixon team that is always so fundamentally sound and plays much tougher at home.

9. at Oklahoma State, March 2 – The Jayhawks were embarrassed in Stillwater a season ago and second-year OSU coach Mike Boynton is building something solid at Oklahoma State. The Cowboys will be playing without a few of their key scorers from last year’s roster, but they have guys ready to fill those roles and the key to Boynton’s late success last season was as much about style as it was personnel. Besides, there’s just always something tricky about KU going into Stillwater.

8. at Iowa State, Jan. 5 – Steve Prohm’s Cyclones play a style that can be hard to match up with and that could be magnified when the Jayhawks get to town with their biggest strength being in the front court. Add to that the ISU fans and always-tough Hilton Coliseum and this one figures to be a battle, even if it’s not quite as tough as in years past.

7. vs. West Virginia, Feb. 16 – Bob Huggins’ boys have done fairly well in Allen Fieldhouse of late, even if they haven’t been able to finish. Expect this group to come in hungry and ready for a fight.

6. vs. Texas Tech, Feb. 2 – This one may be at home, but the Red Raiders have experience winning in Allen Fieldhouse and will be ready to give it another go. Beyond that, Tech catches KU just a few days before Round 1 of the Sunflower Showdown and it’s easy to see how KU could be looking ahead to that one.

5. at Texas, Jan. 29 – Right after that KU-Kentucky showdown in Lexington, the Jayhawks could find it tough to match the energy and emotion from that one. Add to that the fact that Texas is loaded with athletes and talent and seems due to give KU a scare, and it’s easy to put this in the toughest five conference games of the season.

4. vs. Kansas State, Feb. 25 – Big Monday, the place will be hopping and the Wildcats will be looking to atone for their missed opportunity at Allen Fieldhouse last season, when they had the ball with a shot to win but came up short. This one should be one of the most electric and entertaining games of the entire season.

3. at Texas Tech, Feb. 23 – Yes, Zaire Smith and Keenan Evans are gone, but Jarrett Culver and head coach Chris Beard are still there and the Red Raiders are determined to prove last season’s strong run was no fluke. Add to that the fact that this one comes on the road and, yet again, is just two days before a Big Monday showdown with K-State, and you’re looking at one of those tricky games that could be tough to lock in on. The good news here: KU gets a full week to prepare.

2. at Kansas State, Feb. 5 - Most people think the Wildcats are KU’s biggest challenge in the Big 12 this year, and it certainly looks that way on paper. Playing in Manhattan is never a picnic these days and it could be particularly tough this season.

1. at West Virginia, Jan. 19 - No tip time for this one yet, but that hardly matters. Morgantown has not been kind to the Jayhawks during recent years. And even though Devonte’ Graham and company found a way to steal one at WVU Coliseum last year, that does not mean doing so will be a cakewalk this year. The Mountaineers will be ready for revenge and KU’s longest road trip of the season is always a monster.

To which I say..."PSHAW, PIP and BALDERDASH!!!"...Kansas will go undefeated and win every game by double digits and hang #15 with pride next spring.

Kansas losing at home 3 times last year was a fluke, won't happen this upcoming season, Bank on it

On paper, it seems like KU should go undefeated in conference play this season. In reality, it's the Big 12, and even though some say it's a "down year" for the conference as a whole, it's never easy to accomplish. Gawd, but I'm so waiting for the season to start! Like many Jayhawk fans, I've been feeding my basketball fix with dvd's, from the dvr, and streaming media.