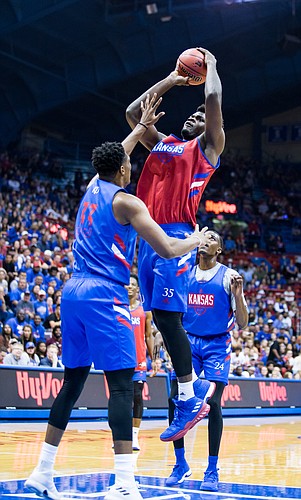 KU center Udoka Azubuike attempts a shot in the lane at Late Night in the Phog on Friday, Sept. 28, 2018 at Allen Fieldhouse. by Kyle Babson

Late Night is not the place to make concrete judgements or outrageous claims about the basketball portion of the evening.

Take, for instance, the Late Night performance of former Jayhawk Carlton Bragg Jr., in 2016. In 18 minutes of that scrimmage — a 48-all tie — Bragg stole the show, offensively, by knocking in 8 of 11 shots and dropping 18 points in 17 minutes.

KU coach Bill Self — seemingly always ahead of the rest of the basketball world when it comes to these things — knew it then and said as much after the scrimmage.

“Tonight was pickup,” Self said at the time. “But he can shoot the ball. He’s obviously got to get to where he can play as a big man, too. He did fine.”

Fine. Good assessment. And one of the last times in that entire season that Bragg looked like he was comfortable out there. The former McDonald’s All-American started just five games and averaged a lower-than-expected 13.8 minutes a game. Clearly, the Late Night breakout was not a sign of things to come.

With that in mind, just because Late Night is not the event to use for All-American-type predictions and projections does not mean that you can’t learn a few things about the new KU team and the upcoming season.

A 20-minute running clock and the up-and-down, free-flowing nature of the scrimmage make it tough to really see much, but there are always things worth noting and memorable moments.

Here are a few, on a player-by-player basis, that jumped out to me from Friday’s 46-37 win by the Crimson squad over the Blue.

• First, it may mean absolutely nothing, and there’s still a long way to go before Self rolls out a starting lineup for the Nov. 6 season opener against Michigan State in the Champions Classic, but that Crimson team sure had the look of a starting five and was the group that I’ve been picking all offseason. Devon Dotson, Quentin Grimes, Marcus Garrett, Dedric Lawson and Udoka Azubuike. The fact that they emerged victorious over Blue starters Charlie Moore, Ochai Agbaji, Lagerald Vick, Silvio De Sousa and David McCormack, probably means nothing. But if you’re into small signs, I think you could do worse than that one and wondering if what we saw Friday night was a preview of KU’s starting unit.

• Devon Dotson - He’s going to have to improve as a jump shooter — and he will, but he showed plenty of flashes of that ability to blow by defenders and attack the paint, both to score and set up teammates. What I liked most about Dotson on Friday night was that, every time he drove, he did so looking to create for others rather than get his. That’s not easy to do on a night like Late Night for a true freshman who is used to dominating in high school. As advertised, confidence is not an issue for Dotson, who looked very comfortable out there and right at home following in the enormous footsteps of Devonte’ Graham and Frank Mason III.

• Quentin Grimes – Grimes showed it all on Friday, finishing with seven points — three from the outside and four in the paint — and three assists in 17 minutes. The high-profile freshman certainly has the potential to take over any game, but he also has a knack for going with the flow and fitting in wherever he can. He’ll need to develop better consistency as an aggressive, attacking offensive option in order for this team to reach his ceiling, but that’ll come because he’ll work at it. Among all of the players out there, Grimes seemed to enjoy the scrimmage more than anyone.

• Marcus Garrett – The sophomore who worked so hard to overhaul his shot this summer made just one shot in three attempts and even that one caught the back iron and somehow fell through, prompting Vick to give Garrett that “Ew” look after the ball fell through in one of the more funny moments of the night. Garrett’s shot looked a little better, but he does so many other things so well that it’s not worth getting too hung up on the shot.

• Dedric Lawson – It took Lawson a while to score, but once he did, he got going in a hurry. His first bucket down low gave Crimson a 27-26 lead and he quickly added six more points by game’s end. We know he can score. And score he will. What jumped out to me were Lawson’s six rebounds, including four on the offensive end. If he’s a willing rebounder this year, he’ll quickly become the favorite for Big 12 Player of the Year. Lawson also showed off his insane passing ability on more than a couple of occasions, backing up Self's claim that the Memphis transfer is one of the best passers — regardless of position — he's had at Kansas.

• Udoka Azubuike – Azubuike did what Azubuike does, throwing down three monster dunks in the victory. But he also did what Azubuike doesn’t do, showing off improved handles (not that KU will want him dribbling as much as he did on Friday night) and more comfort actually shooting the ball instead of just dunking it. It’s still a work in progress, but good signs of an expanded game are there.

• K.J. Lawson – The microwave, anyone? K.J. knocked in three 3-pointers, all in rhythm, with good form and confidence, and proved that he should not be forgotten. He’ll earn minutes based on how he does the other things on the floor, but his continued success as an outside shooter could be huge for this team. He was the best 3-point shooter at KU’s summer camp scrimmages back in June and does not appear to have fallen off at all since then.

• Elijah Elliott – The walk-on from Texas knocked in a couple of 3-pointers and appeared to have plenty of fun out there during his first live action in Allen Fieldhouse.

• Charlie Moore – Showed good quickness on the drive and the ability to set up teammates all the way through his drive. That could be a good thing for Kansas against defenders who think they have Moore stifled only to watch him flip a last-second pass to an open teammate for an easy bucket. The Chicago native also showed a little swagger, barking at teammates and guys trying to guard him after hitting a jumper. That edge won’t hurt this team at all.

• Silvio De Sousa – Finished with four rebounds, but it looked like 14 because De Sousa crashed the glass on just about every possession. Even though he didn’t get all of them, that’s a great sign for a player who needs to rev his motor at all times to be at his best. De Sousa looks so comfortable out there these days, clear evidence that his head start during the 2017-18 second semester did wonders.

• Lagerald Vick – Played at what looked to be half speed and still was easily able to keep up and impact the game. That’s the sign of a veteran who’s been there and done that. Vick knows what to do and when to do it and it was clear while watching him with his younger teammates, even in this setting, that his veteran status is going to help this team a ton this year. Ten points and three assists was nice to see, but the nonbasketball stuff Vick did — leadership, responsibility things — was what made me think he’s ready for his encore performance.

• Ochai Agbaji – Forget about it. This kid’s going to be a star. He already looks nothing like a freshman, physically, and plays with such good energy and effort. When he puts it all together and starts to feel comfortable at the college level, he’s going to be awfully tough to keep off the floor. What a luxury for a deep and insanely talented team. And what a nightmare for KU’s opponents. Agbaji is so explosive, and that can help him on the defensive end as much as on offense.

• Mitch Lightfoot – Don’t sweat the 1-of-5 shooting performance. Lightfoot is a better shooter than that and he also knows that he’ll be the fifth offensive option any time he’s on the floor. You’ve got to like the confidence to keep pulling the trigger, though. By far my favorite Lightfoot moment of Late Night came not on the offensive end, but on defense, when he saw Azubuike catch the ball clean in the paint and have a clear path to the basket, yet still rose up to challenge the dunk attempt. It didn’t work. But Lightfoot didn’t get destroyed either. There aren’t a lot of players who would’ve gone up to challenge Azubuike there, yet Lightfoot did, even knowing full well how big and powerful Azubuike is.

• David McCormack – Forget about the lack of statistics. McCormack’s one shot attempt and two rebounds came in nine minutes of a game that never stopped. Even though he was quiet, his fundamentals were so good and his footwork was so impressive. If anything, Late Night was a good reminder that, even as solid as McCormack looks, his contributions this season could still come in small doses. One thing you do know, though, is that he’ll be ready whenever asked. His maturity is off-the-charts good.

• Chris Teahan – Second-year walk-on played just five minutes and missed the two shots he attempted. He looks bigger and more confident than he did as a rookie.

• Garrett Luinstra – Speaking of rookies, I loved watching the Free State grad during his five minutes out there. He knows where to be, does what he can to keep the ball moving and never hesitated to pull the trigger when a long rebound came bouncing his way on the wing. Cool moment for the local kid.

The Jayhawks are off today but will get back to practice on Sunday, when they’ll shift into a higher gear and really start preparations for the fast-approaching season.

I'm sure evaluating players when defense is not popular or nearly extinct is difficult. But it appears coach will have many options as many appear to have potential. Udoka appears to be in better shape which will be a big factor. Vick will have competition and Garrett will need to become more scoring potential. New guys appear to be potentially capable to contribute. Should be looking for a great season.