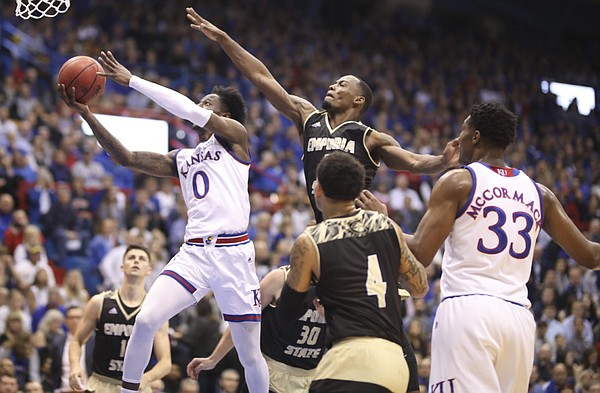 Kansas guard Marcus Garrett (0) swoops to the bucket past Emporia State forward Hassan Thomas (3) during the first half of an exhibition, Thursday, Oct. 25, 2018 at Allen Fieldhouse. by Nick Krug

KU played lightning fast at times, which this team will be able to do, and shot better from the outside (12-of-30, 40 percent) than many probably expected. But they weren’t all that successful pounding the ball inside to take advantage of their massive size advantage and also threw enough of those sloppy, to-be-expected, exhibition-game passes that left the KU coaches shaking their heads. For a bunch of first-time Jayhawks, though, there were enough glimpses out there of this offense’s enormous potential.

KU picked up full-court a few times and almost always grabbed the primary ball-handler as he crossed mid-court, making it nearly impossible for Emporia State to get into any of its sets. Not a lot of blocks and a pretty ho-hum effort on the glass (59-31), especially for a team that should have dominated the boards. KU’s team defense was pretty good and these guys appear to have a decent feel of how to play together and already understand and can anticipate how to switch and when.

Dedric Lawson was terrific early, but beyond that there was not a whole lot to write home about. Junior center Udoka Azubuike still had too many mental lapses where he put the ball down in traffic or didn’t go hard enough to the glass and KU coach Bill Self told him about it throughout the night. David McCormack started slow but had a strong finish. It’s likely that he was just a little sped up early while appearing in his first ever college game. Mitch Lightfoot looked good on a couple of 3-pointers but also got a couple of tough fouls and beat to the rim a time or two.

It might take a while to get used to, but this team is not at all interested in settling for 3-pointers the way last year’s team hunted them. Just about every guard in the lineup passed up an opportunity to pull the trigger and instead chose to drive it hard to the paint. KU coach Bill Self no doubt liked that, but he also preaches to these guys to take open shots. They’ll need a little time to find their rhythm in that regard, but Thursday was definitely a good first step. As for the rest of the backcourt’s night, Quentin Grimes, Devon Dotson, Lagerald Vick and Marcus Garrett were all really good going to the rim and pushing in transition. And they didn’t let their efforts on offense take away from their defensive focus.

Dotson, Grimes, Vick, Dedric Lawson and Azubuike started this one, leaving six guys to find minutes off the bench. Each one seemed to find a way he fit into the flow, with the lone exception being freshman guard Ochai Agbaji who played with good effort but did not have any wow moments. Charlie Moore showed he could be this team’s best and most reliable 3-point shooter, so there’s a role for him. McCormack got better as the game went on and Garrett’s simply too good — in all areas — to keep off the floor. As the season goes on and the rotation sorts itself out, there might not be room to play six guys off the bench every night. But they’ll do it in the early going and that should benefit everybody.

Interesting to hear comment about Ochai who has a small but great line score.

Way too many TOs by the front court and R by ESU.