Self, Jayhawks have more to focus on than KU's spot in AP poll 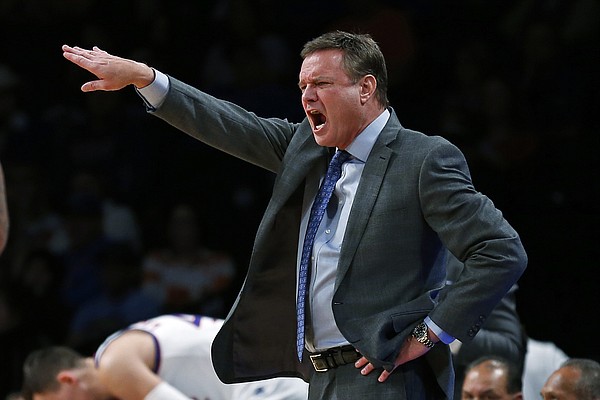 Kansas coach Bill Self gestures to his team during the second half of an NCAA college basketball game against Tennessee in the NIT Season Tip-Off tournament Friday, Nov. 23, 2018, in New York. Kansas defeated Tennessee 87-81 in overtime. (AP Photo/Adam Hunger) by Associated Press

Looking for a Monday morning jolt to shake them out of their Thanksgiving food hangovers and the start to another full work week, Kansas Basketball fans may well have started counting down the minutes and hours until the newest AP poll gets released.

That will come in a couple of hours and we’ll know then whether two Top 10 victories in their first five games will return KU to the No. 1 ranking or if yet another team — Gonzaga — will jump the Jayhawks for the second time this young season.

That’s certainly possible given the Zags’ recent win over No. 1 Duke. And you know what else is possible? Kansas could drop AGAIN without actually losing a game.

How, you ask? Well, all of that love for Duke after Week 1 could linger and pollsters could drop the Devils just a spot to No. 2. In order to make room for that possibility, the Jayhawks (5-0) would have to fall to at least third.

Fair or not fair, you know who doesn’t care about any of that this morning?

You guessed it — KU coach Bill Self.

He’s more worried about the following things, which might not have had an impact on where KU is ranked today but could go a long way toward determining where Kansas ends up ranked in April. And isn’t that all that matters?

1 - Where has Quentin Grimes gone?

After opening the season with six 3-pointers in a big win over Michigan State at the Champions Classic, the KU freshman has hit an early-season slump. It’s not just his shooting that has fallen off — Grimes has hit just 3-of-9 from 3-point range since the red-hot start and 7-of-22 (32 percent) overall from the floor in the past four games — but his ability to be on the floor.

Grimes’ confidence is clearly shaken — a temporary thing, if you ask me — and he appears to be overthinking everything he’s doing instead of just playing. That has kept Self from leaving him on the floor, with Grimes playing just 21 minutes in KU’s latest victory and spending most of the second half on the bench.

Asked why his talented freshman had hit the slump, Self said simply, “I don’t know. I don’t know.”

At this point, Grimes likely just needs to see the ball go in again so his confidence can rise. But there’s no doubt that getting him going is near the top of the list for this Kansas basketball team, though it’s unlikely that Self and company will force the action to try to make it happen.

It seemed so promising in the preseason and absolutely still could be effective at some point. But so far this season, Kansas has utilized smaller lineups more often than anyone might have thought it would instead of riding with two big men the entire time.

Udoka Azubuike and Dedric Lawson — both still in the starting lineup — have played together plenty, but Self also has elected to use Marcus Garrett and K.J. Lawson at the 4 for key stretches of games. That’s been partially because of the look of KU’s opponents, partly because of foul trouble and also because the floor just gets a little too crowded when the wrong combination of two KU big men are out there together.

That’s kept David McCormack and Mitch Lightfoot mostly on the bench and created times when Self has had to rotate Azubuike and Lawson as the lone true big man on the floor.

Getting those two clicking together and finding ways to still keep things spread out and flowing on the offensive end figures to be a major point of emphasis for the Kansas coaches in the weeks ahead.

Just when it looked like the Jayhawks were close to settling in on some kind of set rotation — Marcus Garrett and Charlie Moore in, Devon Dotson and Quentin Grimes out, Lightfoot as the third big — Garrett suffered a concussion, Grimes started slumping and K.J. Lawson played out of his mind.

Good question. It looks like, at least for another week or two, the rotation will remain in flux, with Garrett, Lawson and Lightfoot all still auditioning for minutes and roles.

Freshman big man David McCormack appears to be No. 10 in KU’s current rotation, but don’t bet on him staying there the entire season. He’s still young and things are moving fast. But by the end of winter break, he might be closer to being ready to contribute in a key role.

The bigger question is what happens with K.J. Lawson, who played more minutes against Tennessee (19) than he had in all four of KU’s games before that. Most of that came out of necessity, with Garrett sidelined and Grimes struggling, but K.J. delivered and looked good doing it.

He’ll be worth keeping an eye on in the weeks ahead.

You guessed it. Nothing. Self talked about it on a recent “Hawk Talk” episode but didn’t have much to report. And he hasn’t said much outside of that in the past few weeks.

ESPN.com’s Jeff Borzello asked Self about De Sousa in New York and Self characterized the De Sousa situation to Borzello as being in a “holding pattern.”

It figures to remain there for a while and, with the holidays approaching, it’s looking less and less likely that some kind of resolution could happen before the start of Big 12 play.

There’s still time for that to change quickly, but it does not appear to be moving in that direction as of today.

Raise your hand if you’re shocked.

I actually prefer KJ out there to Marcus. Unless there is a special need for Marcus on a particular player, I think KJ has more offense which we certainly needed against Tennessee. Marcus still needs alot of work on his jump shot and his free throws are not much above Dok.

Neither KJ nor Marcus is the type of impact player Kansas needs to do real damage.

I wouldn't write KJ off so quickly. I think we'll see some real improvement if he continues to get minutes. I really like Marcus but yes... his game is lacking what we need for serious minutes.

The only hope for KJ is that the coaching of Bill Self can rescue him from himself.

In situations like De Sousa's the NCAA needs to deem him "conditionally eligible" and allow him to play without penalty (to him, the team, or the University) until they determine whether he will be eligible from that time forward.

Great...now if the NCAA would only read your post. My guess is the NCAA is passing the time and will simply deny any reason for SD not playing. They love to see this as it gives them undue and unearned influence with programs they never deserved in the first place. They will then explain his sitting as "KU's choice." However, if KU plays him, and they find the slightest issue against SD and KU, they will throw the death penalty at KU. They are dying to show some power. They look quite foolish for allowing the FBI to do NCAA investigations. All I've learned about the NCAA through this mess is NOT to trust them at ALL.

The NCAA is doing the same crap that they gave KU last year with Billy Preston. Look for DeSousa to do the same as Preston, and finally just give it up and go pro. No sense in him sitting around waiting for the NCAA do do something.

DeSousa is facing punishment without a trial. NCAA is doing nothing and KU is holding him out until they make a decision. There is no reason not to check the evidence and make a decision. Either he is guilty (well what others have done) that needs punishment or let the guy play.

Matt states it succintly (yet again):

"Fair or not fair, you know who doesn’t care about any of that this morning? You guessed it — KU coach Bill Self."

Coach knows that what's ultimately important is how good you are in March, and that each week of the season between now and then is an opportunity to step up higher...NOT a beauty contest in the rankings. Having said that, and for what it's worth, Kansas does not deserve to be ranked number 1 right now because even judging by optics it's impossible to suggest that Kansas is the best team in the country. If you think they are, then you're smoking something. But as above, Coach has a whole season to get them there.

All that matters is who's number 1 at the end of the season. November is far too early to care about rankings.

This early preseason #1 is absolutely ridiculous. But the writers will justify their paychecks and create drama for their bosses.