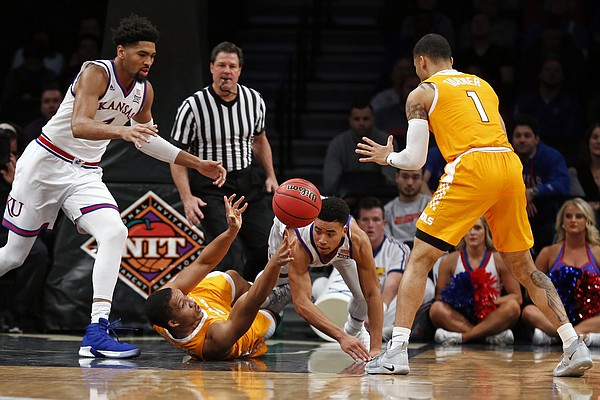 1 – Devon Dotson – Once again set the tone for Kansas as an attacking, tough team. And this time he scored, too. Others had numbers that were more or just as impressive, but Dotson had moments where he was the only Jayhawk on the floor playing to his potential. Without that, Kansas loses.

2 – Dedric Lawson – Another double-double (24 points and 13 rebounds) and a fairly dominant overtime period. He still stumbles at times and it’s not all smooth all the time, but it looks as if the junior from Memphis is starting to get comfortable.

3 – Lagerald Vick – Started with a 3-pointer, got red hot during a personal 8-0 run late and showed up big as a veteran with some grit to him. Shot 6-of-12 for the night and added 15 points and four assists in a game-high 43 minutes.

4 – K.J. Lawson – There’s no two ways about it. Kansas does not win this game without K.J. Lawson. Scored eight points, grabbed six tough rebounds and swiped two steals in 19 minutes. That’s pretty good for anybody, but it’s real good for a guy who has struggled to even get in most games.

5 – Charlie Moore – Got to the rim and played big minutes with Marcus Garrett out with a concussion. Didn’t shoot it great, but helped the offense find its flow and loosened up the Tennessee D with his fearless drives to the rim, none bigger than the one that fouled out Tennessee’s Grant Williams late.

6 – Mitch Lightfoot – Three tough rebounds and a block in eight minutes. Nothing that’s going to lead SportsCenter, but absolutely what Kansas needed in those eight minutes.

8 – Quentin Grimes – The rough stretch continues for the Kansas freshman, who played just 21 minutes and scored five points and grabbed four rebounds. Shot just 1-of-4 from the floor and no doubt wants to perform better. The upcoming week off could do him well. But he was all smiles as the Jayhawks collected their hardware after the game.

9 – David McCormack – Two turnovers in four minutes with one foul and one rebound. He’s still just not quite game ready.

Matt, I like this series of articles, but you might want to put it in a place where it can be found. I saw it only because I found it linked on the KUBB page on Yahoo. I rarely ever look a the main KU Sports, but rather generally look at the FB or BB page, etc. …

This type of thing used to be rare or nonexistent on this site, but it basically is a constant negative feature of the site now.

Annoying, but, I assume, easily correctable and preventable.

I think the player rating articles are interesting and provide some good insights at time.

I do really, really wish that the site provided some type of statistical numerical ranking of the players – like Martin Manley did before his untimely demise.

Here is how that plays out so far this year:

I agree with your comments about KJ Lawson’s value Matt, but it also is interesting to see how it is backed up by the numbers.

Sometimes Azubuike looks like a YMCA stiff rather than a well-coached Big who hopes to soon play in The League.