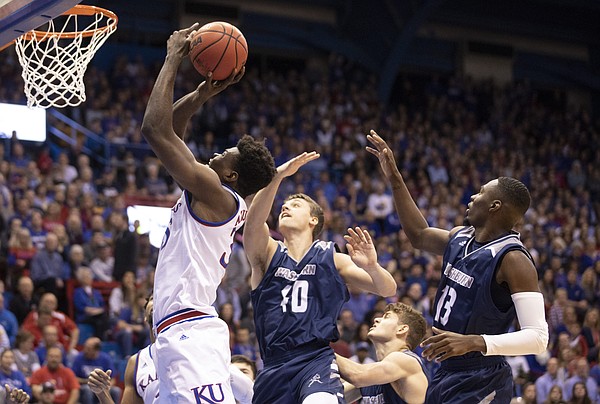 Kansas center Udoka Azubuike (35) gets to the bucket past Washburn forward David Salach (40) and Washburn guard Tyas Martin (13) during the first half of an exhibition, Thursday, Nov. 1, 2018, at Allen Fieldhouse. by Nick Krug

It was a slow, sloppy and sluggish first half and KU finished with just 35 points and 11 turnovers on 52 percent shooting. But then things started to click and KU looked like the ultra-dangerous, free-flowing, high-flying team that many believe they can be. The ball moved from side to side, guys got open looks from 3-point range — and drilled them — and Kansas turned defense into quick offense that overpowered Washburn.

Grading this one on a curve, keeping in mind KU’s size, depth and athleticism advantage, the Jayhawks did their best to suffocate the Bods but also gave up a few too many clean looks both inside and out. The numbers don’t tell the complete story. Washburn had just 21 points on 27 percent shooting in the first half, but rarely looked overwhelmed by KU’s defense. That changed in the second half, when the Jayhawks picked up the intensity and took Washburn out of much of what it wanted to do after the first two minutes of the second half.

Udoka Azubuike delivered the kind of bounce-back game KU fans wanted to see and KU’s coaches needed to see. And Dedric Lawson was once again a smooth-operating matchup nightmare who scored inside and out. David McCormack and Mitch Lightfoot each added good moments and bad during their 28 combined minutes on the floor, but both played with great energy and showed they’re ready to fill those supporting roles behind KU’s two potential stars.

A few too many turnovers and some passive play brought this grade down a notch, but KU’s versatility in the backcourt was on full display in this one and it was KU’s guards who helped blow this one open. Lagerald Vick, though pressing to find his shot at times, was dynamic from behind the arc, and Devon Dotson, Charlie Moore and Marcus Garrett all did a solid job of pushing the pace, finding others and running the show.

Nobody really stood out off the bench in this one, but it was interesting to see how Grimes and Dotson handled that role instead of starting like they did a week ago. It took Grimes a little longer to plug himself in the action than it did Dotson, who continues to be a pest for opposing ball handlers and a capable creator on the offensive end.