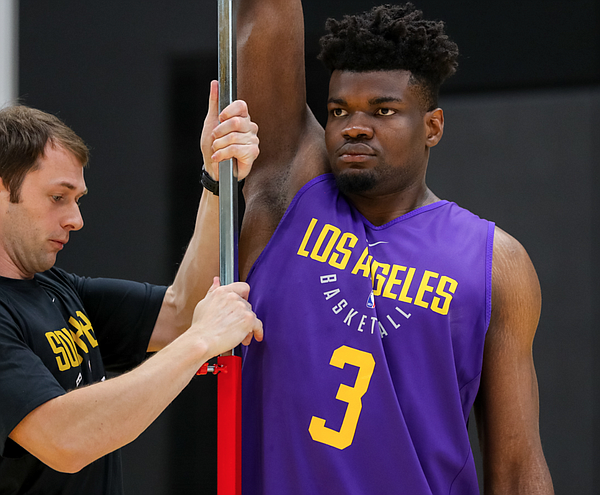 Although the NBA's pre-draft combine is still just a little more than a week away, some of the top college basketball prospects either in or vying to be in the 2018 draft class already have started showcasing their talents for NBA franchises.

One such player is KU big man Udoka Azubuike, who on Monday participated in a workout with the Los Angeles Lakers out in California.

Azubuike, KU's sophomore center from Nigeria who is testing the water on his draft stock but still can return to KU for the 2018-19 season provided he pulls his name out of the draft by the May 30 deadline, worked out with Baylor's Jo Lual-Acuil, Ohio State's Keita Bates-Diop, Houston's Rob Gray, Florida's Jalen Hudson and Nevada's Caleb Martin at the UCLA Health Training Center in El Segundo, Calif.

In addition to being put through a lot of the same things he will discover at the combine May 16-20 in Chicago, Azubuike participated in 3-on-3 scrimmages and met with team officials.

The Lakers, who touted efficiency as “the heart of Azubuike's game” have the 25th and 47th picks in the June 21 draft.

None by Lakers Nation

Azubuike's decision to stay in the draft or return to college is enormous for Kansas.

With him, the Jayhawks will move into the 2018-19 season with a key piece on both ends of the floor and an experienced player who they can run their offense through more than ever before.

Without him, KU coach Bill Self will be forced to replace all five starters from last season's Final Four team and will be left with Memphis transfer Dedric Lawson, junior Mitch Lightfoot, freshman David McCormack and, at least as of today, sophomore Silvio De Sousa to hold down KU's front court.

In a May 3 story titled “These eight teams are sweating out NBA Draft decisions,” ESPN.com's John Gasaway further examined what Azubuike's decision means for KU.

“You can make a case that few players nationally present as large a contrast between current draft stock and likely 2018-19 college impact as Udoka Azubuike," Gasaway began.

“In terms of his draft profile, Azubuike appears to be a work in progress. Bill Self's big man is a proven 2-point-making machine and promising rim defender, but, ideally, he'd post higher rebound percentages at his size and on a team that gave him little if any competition for those boards. Indeed, whether it's rebounding or low-foul shot-blocking (or, in the best of all worlds, both), Azubuike will likely have to show the NBA something more to offset a lack of 3-point ability to date.

“When it comes to what he can do for his college team, however, Azubuike's decision might loom larger than that of any other single player.” 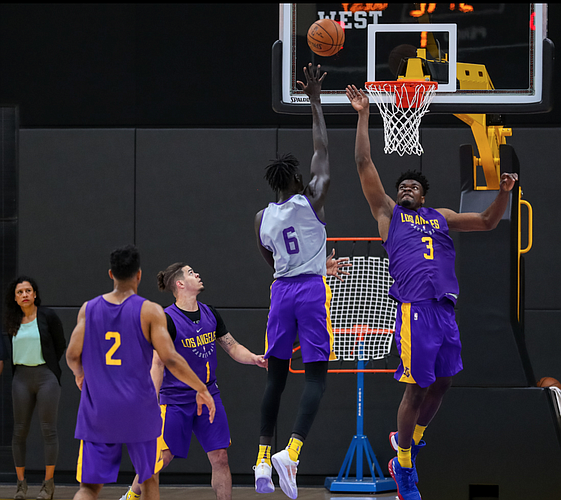 Doke's physical style fits in with the pro game much better than the college game. He would be allowed to make physical contact without being called for stupid touch fouls. He could better go after rebounds without picking up cheap fouls. He needs to develop a much better offensive game to become a really good pro player.

Dok has NBA size, true..but he doesnt have NBA anything else..he is still a little sluggish in his footwork..guys like Embiid and Anthony Davis would just run right by him..he is also a below average rebounder/rim protector for a guy his size..outside of a running hook and dunk, he really doesnt have any other offensive moves..plus his FT shooting is horrendous...I think in the end, he'll be back in Lawrence..a guy with his skillset would have been a desireable project player about 10-15 years ago when big men still posted up..in todays NBA however, even big men have to have a reliable 10ft jump shot

Aren't some of these players still in school? And it's about time for final exams coming up. How does all that work out should he decide to stay one more year???

As I understand it, players get advance assignments. Dok is probably already done for the year.

Some schools in the Southeast finished finals last Friday.