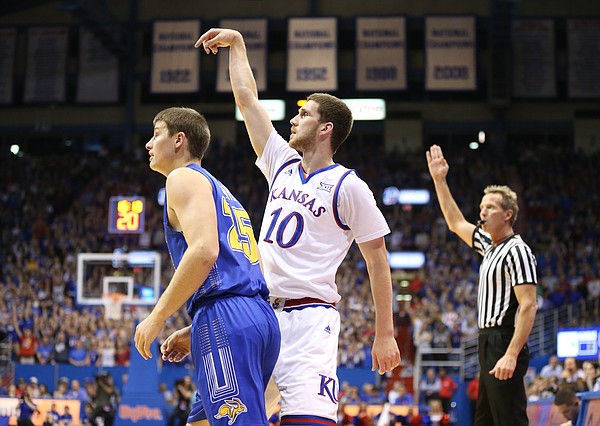 Next up: Senior guard Svi Mykhailiuk:

After deciding to return to KU for his senior season at the last possible minute, Mykhailiuk refocused his mind and body on delivering a monster season for the Jayhawks.

In addition to finishing as the team's second leading scorer, Svi flashed an all-around game that had been seen only in flashes during his first three seasons as a Jayhawk.

Better on the glass, as a defender and as someone who could put the ball on the floor and attack the rim, Svi became much more than just a spot-up shooter while maintaining his ability to be deadly from distance at the same time.

He Will: Finally look fully comfortable with his role — There's no question that this was the case for Svi, who was a bona fide leader for the Jayhawks during the 2017-18 season in a way that merely supported the amazing leadership put forth by his good buddy Devonte' Graham. Embracing that role and also trusting himself and having the confidence needed to step out of his comfort zone as a more complete player made Svi one of the toughest players in the Big 12 Conference this season. And for his efforts he earned a second-team nod in the all-Big 12 postseason awards.

He Won't: Experience a significant drop-off from 3-point land — While this was true in terms of his 3-point percentage, the reasons behind my prediction were somewhat laughable. To be fair, I, like most of you, was under the impression that KU would be playing two bigs for most of the season and that would limit the number of 3-point attempts available to the guards. It did not turn out that way, of course, and, for the third consecutive season, KU set a school record for 3-pointers. The laughable part comes from this line, though: “He made 70 of 176 3-pointers last season (2016-17) and 37 of 92 the year before. The guess here is that he’ll fall somewhere in the middle of that this season, perhaps knocking down 55-60 of 145-160 attempts.” Oops. Svi, who shot 44.4 percent from downtown for the season, actually hit that range by the 16th game of the season, when he hit six 3-pointers in a home victory over Iowa State that gave him 57 triples for the season to that point. By the time it was all said and done, Svi broke the school record by knocking in 115 3-pointers in 259 attempts. There was no significant drop-off, but I'm only taking partial credit for this one considering how off my specific guesses were.

He Might: Make himself a first-round draft pick — I don't think this one is crazy, but I wouldn't bet much on it happening. Svi definitely appears to have the potential to land near the top of the second round, but he's going to have to really wow some people during the next six weeks to move into the first round. The latest Mock Draft from ESPN.com's Jonathan Givony has Svi pencilled in as the No. 49 pick overall and I just can't imagine there's enough time or a big enough market for Svi's skills to have him jump 20 spots. It wasn't for lack of trying and development, though. Svi's decision to come back to KU made him a more NBA-ready player.

My overall prediction grade for this one: 1.5 out of 3.

• Svi’s hot hand the product of confidence, Self says

• Tom Keegan: Mykhailiuk’s game-winning three could lift him out of mini-slump