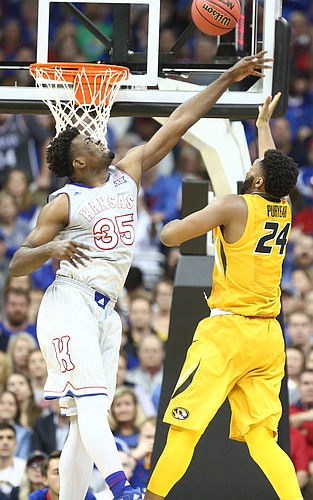 Kansas center Udoka Azubuike (35) defends against a shot from Missouri forward Kevin Puryear (24) during the first half of the Showdown for Relief exhibition, Sunday, Oct. 22, 2017 at Sprint Center in Kansas City, Missouri. by Nick Krug

Before we put the whole Udoka Azubuike testing the NBA waters issue to bed, let’s be clear on one thing: Azubuike did not miss out on a chance to leave school early because of his lack of a jump shot.

The sooner people understand that popular take on why the NBA was not ready to draft him, the sooner people will be able to put out of their minds the visions — some might call them fears — of Azubuike pulling mid-range jumpers throughout the 2018-19 season at Kansas.

That’s not going to happen. No one wants it to and no one needs it to.

Despite the recent changes in the NBA — from a game dominated by the biggest of men to one that favors smaller, quicker, more skilled scorers — a path still exists that takes Azubuike to the NBA after his time at Kansas is finished.

And all he has to do to get on it is become more dominant at the things which his massive size puts him in a terrific position to do. Believe it or not, that has a lot more to do with his defense than any improvements Azubuike needs to make on the offensive end.

Wednesday night, not long after Azubuike decided to return to Kansas for his junior season, I caught up with an assistant coach from an NBA team in the Eastern Conference and he had some interesting thoughts on where Azubuike stands heading into his junior season at Kansas.

In addition to stating some of the more obvious areas of Azubuike’s game that need work — i.e. improved free throw shooting — the assistant focused almost exclusively on Azubuike’s defensive potential.

“As you watch the playoffs, and the upcoming Finals, you don’t see a lot of guys with his body type playing,” the coach said. “The league has gone to so much switching defensively that there could be concerns as to whether he can defend smaller, quicker players at all. I do like him and I think he definitely has a spot at this level. But how big of a role he’ll have I think will hinge on his ability to become more versatile defensively.”

For comparison’s sake, and to illustrate his point, the coach brought up Houston Rockets center Clint Capela, a 6-10, 240-pound athlete who, during the Rockets’ series with Golden State routinely found himself switching onto Steph Curry and Kevin Durant as much as he guarded big men Draymond Green and Jordan Bell.

“The league is trending toward more versatile bigs that can pass, dribble and shoot,” the coach said, noting that none of those three are particular strengths of Azubuike’s. “But there is still a place for a guy that can set screens, roll hard to the rim and finish above the rim or in traffic. Capela is an example, but he has the ability to switch onto guards defensively and can make them miss. Can Udoka do that? Or can he be a rim protector like DeAndre Jordan? Those are things people are going to want to see.”

And those are the things Azubuike should focus on during the 2018-19 season at Kansas.

Forget developing a jump shot. I’m not sure a scenario exists, in college or the NBA, where a coach ever would want Azubuike taking jumpers. And forget trying to become something that better fits into the small-ball world the NBA is quickly becoming.

Instead, Azubuike should continue to focus on improving what he does best, dominating whenever and wherever possible — we’re talking a goal of a 10 rebounds per game and pushing his blocked shots total from 60 to 100 — and punishing the rim and whoever tries to get in his way every time he gets the ball down low.

“His ability to catch lobs and finish above the rim are definite positives,” the coach said.

Doing both of those, while focusing his improvement efforts on defense and the glass, will help both Azubuike and the 2018-19 Kansas Jayhawks.

Excellent analysis of Udoka. He is a low post player, and he always will be. With that comes the need to be a great rebounder and rim protector.

Undoubtedly, Coach Self and his staff have told him the same thing. Therefore, by coming back, Udoka is assured that he will be a "5" and that the staff will do everything in their power to make him as effective as possible at that position. To do otherwise is to put a "square peg in a round hole."

Plus...he might not have a J, but he has the ability to become a very good low-post scorer. No matter what the current NBA trend is, it is nice to be able to throw the ball into the post and get an easy bucket. Buckets count no matter where they come from on the floor. He just needs to keep improving who he is as a player.

one part of his game not mentioned is his vision of the fast break. i don't have statistics but he seems faster than any big man i've seen us play. if he learns how to block then using that speed could make an epic defender.

This is an excellent article. There are things about Doke's game that are still effective in the NBA. And as we all know, he's just coming up on his "freshman" year of college, age-wise (won't turn 19 until September). So it's not like he's over the hill and can't learn new tricks. The agility drills at the combine showed that he's actually plenty fast in a dead run for a big guy. His shuttle times were poor, though. He has some things he knows he needs to work on (shooting from distance isn't one of them) and he has time to do it.

Does anyone honesty think that Self hasn’ told Udoka the same thing? Perhaps it’s like a teenager parent thing where the kid needs to hear it from another trusted source.

Anyway, good to see him committing to another year....or two.

Doke will be a lottery pick next year, the class of bigs will be smaller, he will be a year older, stronger (thats kind of scary), now has the experience of last year's run where the very best coaches tried everything imaginable to stop him, and this season he will have backup so he doesnt have to play tired or with a muzzle on to avoid foul trouble, meaning rebounding and defense should improve. Another year of development could benefit Doke more than any player I can think of as even if some club would have gambled a 1st Rounder on Potential, I'd rather develop under coach self than in the D League. But I agree with Coach Self, he also benefitted greatly from going to the combine, hearing about his deficiencies straight from the NBA Folks which will jump start his development in those areas and now they all saw him up close and know his strengths are pretty enormous too. WIN WIN WIN situation, with us fans being the last WIN.

I don't think this is good news for Dok. If he is going to hang his hat on defense, wow! He couldn't even cover the Villanova bigs. I mistakenly thought he was overweight, but he had only 8% body fat at the combine. He is no Clint Capela, either. I just don't think he is quick enough for the League, but I hope I'm wrong and he has a solid NBA career.

if the nova bigs hadn't been hitting their 3's, they'd have had to play near the basket and would have gotten destroyed so lets not get carried away.

Also, Dok lost almost a year with the wrist injury which set him back; just watch his improvement next year

I am hopeful for a lot of improvement, but most NBA bigs can hit 3s, or at least mid-range jumpers so that is still a problem.

Sasha Kaun made $2m/year with CSKA Moscow. I don't know if that was a particularly rich foreign team (i'm guessing it was), but I think Azabuike will make nice money playing basketball somewhere in the world. He has still has world-class wingspan and standing reach (2nd at the combine to freak of nature Mo Bamba; Azabuike would have been first in both categories most years).

The NBA feedback was good for Udoka because he needed to improve on the listed aspects regardless of where he ends up. I personally think he is too slow for the NBA, and that is a lack of athleticism, not effort; he doesn't have the athletic motor to power that huge body, at least at full throttle for very long. At 8% bodyfat, he has obviously been taking strength and conditioning seriously. But it still can be a happy ending for him to make a lot of money playing somewhere, and his development in the coming year (as noted, particularly in rebounding and rim protection) is key to that.

The Latin term for i.e. is “id est,” and in English it means “that is.” An easy way to use i.e. correctly is to replace it with the phrase “in other words.” If the sentence makes sense, you are using the term properly. Consider the following examples:

Example 1: She decorated the auditorium with pink and white streamers, heart-shaped balloons and Cupid’s arrows for the romantic event, i.e., Valentine’s Day.

Using “i.e.” in Example 1 specifies that the “romantic event” is “Valentine’s Day.”

Example 2: Sean likes to study in a place where he can concentrate, i.e., the school library.

In Example 2, the use of “i.e.” clarifies where Sean likes to study.

no NBA team wants a hack a shack big in the fourth quarter. Hell, Self took Dok out of our games under the 5 minute mark. That is a huge problem that only Dok can fix.

Doesn't need a mid to long-range jumper, but he does need to be quicker, more accurate and more fluid with his short-range jump hook. and - duh - free throw shooting.

I figure that he will look a lot better this coming season. The dude hasn’t played very much basketball.

What's the story with LaGerald Vick? It's being reported that he withdrew from the draft and didn't hire an agent. I thought our 13 scholarship limit was full.