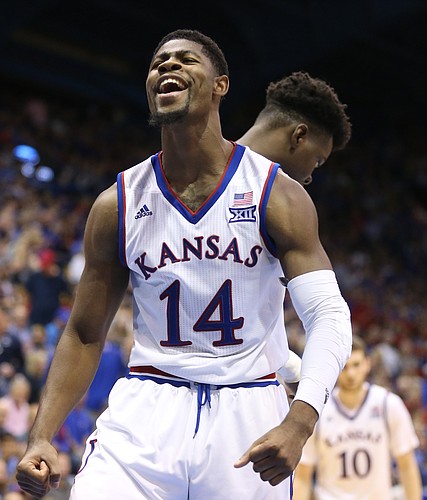 Kansas guard Malik Newman (14) roars after an and-one bucket during the second half on Friday, Nov. 24, 2017 at Allen Fieldhouse. by Nick Krug

Next up: Sophomore guard Malik Newman:

Armed with enormous expectations and a ringing endorsement from Kansas coach Bill Self, Mississippi State transfer Malik Newman finally hit the floor for the Jayhawks in 2018 and then found himself stuck in neutral.

After hearing from Self and his assistants about how dangerous of a scorer Newman could be throughout his red-shirt year, it only seemed like a matter of time before he would suit up and start getting buckets.

And, for the most part, he did. Even if it was not always that pretty. But there's no doubt that Newman spent a good chunk of the season still trying to figure it all out and in search of a comfort zone that could allow him to be the player so many promised he would.

That moment finally came late in the season — at the perfect time for both KU and Newman — and the sophomore scoring guard ended on a high note that inspired him to leave KU early in search of his shot in the NBA.

He Will: Lead the Jayhawks in scoring, with his averaging finishing between 17-20 points per game — Oops. Not only did Newman not lead KU in scoring, he didn't even finish second. But it's not as if he had a terrible season. In fact, although he did not reach the 17-20 point range I predicted, he did finish around that mark during the final eight games of the season, when he averaged 22.5 points per night in KU's five postseason games, hitting for 20 or more points in six of them. In fact, Newman went for 20 or more 10 times during his lone season as a Jayhawk, averaging 14.2 points per game while shooting 41.5 percent from 3-point range. Had it not been for the crazy-high expectations, his numbers this season would have been viewed as rock solid.

He Won't: Be the same type of player as Frank Mason III but that won’t keep Kansas from being in the conversation for the nation’s most dynamic one-two punch in the backcourt — Hard to argue with this one, unless you want to nitpick and say that KU actually had the nation's most dynamic one-two-three-four backcourt punch. Much more of an outside shooter than Mason ever was, Newman actually did some of his best work on drives to the rim late in the season. Even those, however, were much different than the drives Mason made his signature move during his senior season at KU. But both were effective in putting points on the board and even getting to the free throw line.

He Might: Leave for the NBA after the 2017-18 season — In looking back, this one was definitely one of those where I didn't go too far out on a limb in making my prediction. It seems now — and really even seemed then — like this was the plan all along for Newman, who simply needed to have a solid year to be convinced to go ahead and make the jump. As mentioned above, his year was solid overall and his strong finish made even more of a splash. If the goal is to go when your stock is at its highest, Newman pretty much had no choice but to leave.

My overall prediction grade for this one: 2 out of 3.

• The rocky, yet rewarding, evolution of KU’s Malik Newman

• Tom Keegan: Time for the real Malik Newman to stand up

Newman lived up to his billing..he may have gotten off to a rough start but the last 20 games he was exactly who we thought we were getting

How in the hell do you sit there and rationalize to yourself that you deserved .5 points for being off the mark on #1?

Love your articles but you are definitely reaching to give yourself credit.

Nope. Total oversight. Copied the template from a previous one and forgot to change the grade. Definitely a 2 out of 3 and no more. I could give a damn about getting "credit" for any of these. It's just fun to look back.

To Matt's credit, I generally think he's too hard on himself scoring-wise.