Final Four factoids on a big day in San Antonio 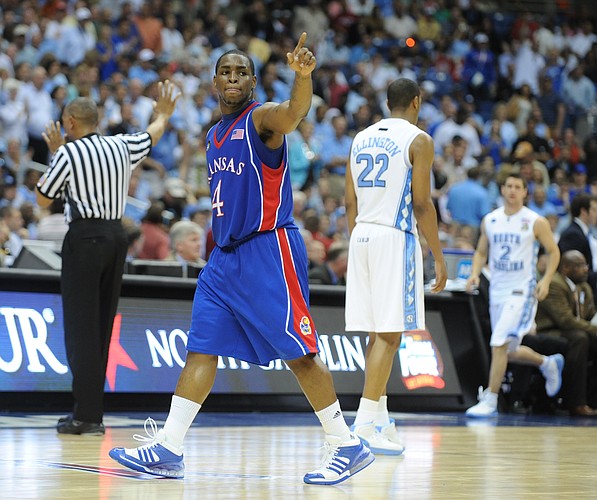 Kansas' Sherron Collins points to the fans as he exits the court against North Carolina in the first half on Saturday, April 5, 2008 at the Alamodome in San Antonio, Tx. by thad-allender

San Antonio — It's game day, Kansas fans, and the countdown is officially on to tonight's 7:49 p.m. tipoff against Villanova.

While the next several hours could be some of the longest of your fandom lives, as you wait for Devonte' Graham, Malik Newman, Udoka Azubuike and the rest of the crew to do battle with Jalen Brunson and Jay Wright's Wildcats, we'll do our best here to help you kill some of the time with some Final Four facts and figures from KU's past and present.

• Let's get started with a little this day in history. Did you know that tonight's game will tip off exactly six years to the day after the Jayhawks' last semifinal game?

In that one, on March 31, 2012, Kansas knocked off Ohio State in a thrilling game in New Orleans. The Jayhawks trailed by nine at the break and had to scrap and claw for everything they got that night.

Led, as they were that entire tournament, by Thomas Robinson's 19 points and eight rebounds, KU advanced to the national championship game and a date with Kentucky on the final night of the college basketball season with a 64-62 victory over the Buckeyes.

• In that one, the Jayhawks, as the higher seed, were the home team and wore their white uniforms.

Tonight, as the lower seeded team in this year's Final Four matchup — Villanova was the No. 2 overall seed and KU the No. 3 overall seed — the Jayhawks will wear blue jerseys.

KU is 5-4 in blue uniforms in Final Four games dating back to 1988, when the Jayhawks beat Duke and Oklahoma in back-to-back games in blue.

KU wore blue in both Final Four games in 2008, which featured all four No. 1 seeds and Kansas as the fourth overall seed.

If the Jayhawks win tonight, they'll wear white again on Monday night, as both Loyola (11) and Michigan (3) are seeded lower than the Jayhawks.

• KU has won 12 Final Four games in its storied history, which ranks tied for fifth all-time. A win tonight would move KU past Indiana and into fifth place on that list all alone behind UCLA (25), Kentucky (20), North Carolina (18) and Duke (17).

The Jayhawks already are one of just six schools to reach the Final Four 10 or more times. This will be KU's 15th appearance in the Final Four, putting the Jayhawks in the same company as North Carolina (20), UCLA (17), Kentucky (17), Duke (16) and Ohio State (11).

• KU's clash with Villanova could not come at a more perfect time, as it serves as a nice appetizer for a home-and-home series the two schools have scheduled in the next couple of seasons.

Win or lose tonight, the Jayhawks will welcome the Wildcats to Allen Fieldhouse on Dec. 15 for the first game of the newly signed series. KU will complete the series by traveling to Philadelphia the following year to take on Villanova on Dec. 21, 2019 at Wells Fargo Center.

Tonight's game will break a 3-3 tie in the all-time series between these two programs. The series dates back to 1968 and Nova has won the last two meetings, a 64-59 win in Louisville in the 2016 Elite Eight and a 63-59 victory in the second round of the Battle for Atlantis tournament in the Bahamas in 2013.

KU's most notable win of its three victories over Villanova came during the Jayhawks' run to the 2008 national title. Kansas defeated Villanova 72-57 in the Sweet 16 in Detroit on its way to winning the 2008 title right here in San Antonio.

• This game has been very good to the Jayhawks in recent memory. Kansas is 3-0 in its last three Final Four games, knocking off Marquette in 2003 to advance to the title game against Syracuse, North Carolina in 2008 en route to a title-game win over Memphis and Ohio State in 2012 before falling to Kentucky in a game that delivered John Calipari his first ever national championship.

The Jayhawks are playing in their 47th NCAA Tournament — 29th in a row, which is an NCAA record — and already have reached their 31st Sweet 16 all-time, 10th Elite Eight in the past 16 seasons and 15th Final Four in school history.

• Let's wrap this up with one of those off-the-wall nuggets that might not mean a darn thing for KU's game but could mean something to those Kansas fans that believe in signs and superstitions.

So what's the KU connection? Last September, McGraw joined Bill Self in being inducted into the Naismith Memorial Basketball Hall of Fame, making newly inducted HOF coaches 1-0 in Final Four games this season.

Will Self make it 2-0 tonight and give both Hall of Famers a shot at bringing home the title?

Time will tell and we'll be there to bring you every ounce of coverage you could want. Enjoy the rest of your day and tonight's game and thanks for checking out all of our coverage this week from San Antonio and throughout the season and this year's NCAA Tournament.