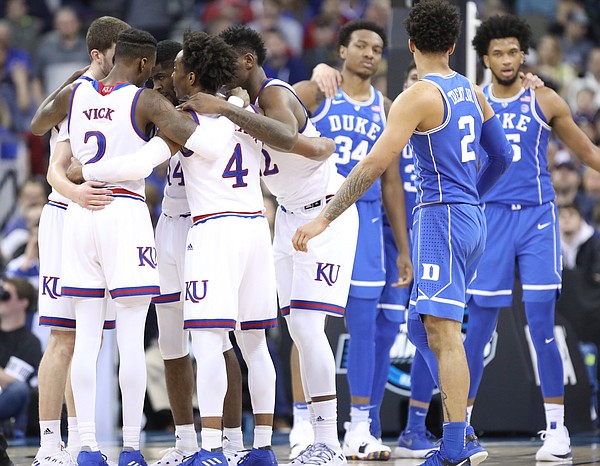 The Jayhawks and Blue Devils huddle up during the first half, Sunday, March 25, 2018 at CenturyLink Center in Omaha, Neb. by Nick Krug

Quick grades for five aspects of KU’s thrilling, 85-81, overtime victory over Duke in Sunday's Elite Eight in Omaha, Nebraska, which moved Kansas into the Final Four next weekend in San Antonio.

Look, Malik Newman alone would have landed the Jayhawk in the A range tonight, but it did not hurt that his teammates helped him drain 13 total 3-pointers, 12 of 15 free throws (OK, so Newman had 11 of those) and 20 assists while making clutch shot after clutch shot throughout the night. Four players reached double figures. One more was a point away. And the Jayhawks hung 85 points on the zone defense that had led Duke to a 10-2 record during the past month. Impressive day any way you slice it.

There were mistakes. Guys missed assignments. And, yeah, Duke made some pretty damn good plays. But KU's defensive game plan on Marvin Bagley and Wendell Carter was sensational. Give KU coach Bill Self and his entire coaching staff a ton of credit for not only coming up with the game plan but also convincing his guys how they could and that they could execute it. Boy, did they. KU killed the Blue Devils on the glass (47-32) and forced Duke into 42 percent shooting and 24 percent from 3-point range.

Udoka Azubuike played a decent game and definitely let his presence known when he was out there — in both the good and bad ways. But Silvio De Sousa's 26 minutes in relief of the foul-plagued sophomore was superb. De Sousa grabbed 10 rebounds and scored four points on 2-of-3 shooting. Most importantly, he fouled just once, allowing Self to stick with him for prolonged periods of time, which allowed Kansas to get Azubuike to the final few minutes of the game. 13 points and 18 rebounds from the two bigs who played was certainly good enough. And it continues to just be mind-blowing that Self and company have been able to get this done with such limited depth on the front line.

Yes, Malik Newman scored 32. And, yeah, Graham and Mykhailiuk combined for another six 3-pointers. But this was not just a one or two guys had a good night type of thing. All four of KU's starting guards were flat-out terrific in this one. Lagerald Vick, from the standpoint of impacting the game in so many different ways, might have been the best of all of them. His passing was great. His aggression was even better. And he played a whale of a game, with a ton of confidence. KU needed that foursome to be great and it was.

Marcus Garrett made a couple of big plays and also a couple of big shots. But he also looked like a freshman a few too many times in the eight minutes he was out there. Not his fault. Huge stage and a ton of tense moments would be a lot to take for just about any young player. That's where the minus comes from. And the A is for De Sousa's big night. It's incredible to think about how important he has been for this team, when you think back to how lost and overmatched he looked when he first arrived.

KU Sports Extra - To The Final Four They Go by KUsports.com

Garrett might not have been perfect, but I wouldn't blame it on being a freshman. More like it was because he was human, because every player made mistakes. He played a whale of a game.

Also, when Svi is limiting Bagley and pulling down 10 boards (D-D), does that count for the front court?

Probably the most impressive part of the game IMO. It was great to see the other guys all step up and do the things that Coach has been prodding them towards all season - Vick was amazingly decisive in flashing to the middle of the zone over and over again, but Svi's performance was so far from the norm (low post defender?), and he held an all-American below his average. Wow! Where are the folks hating on his D now? Simply amazing.

Matt, I'm glad you didn't overlook Vick's contribution. We need EVERYBODY hitting on all cylinders, and the return of LaG's confindence has been key.

my only regret from lat night's awesome win is that Lightfoot didn't find the court. Taking absolutely nothing away from the value de Sousa brings to the team and they are much stronger as he continues to grow and be comfortable; no player has had to sacrifice more of his natural game than Mitch and he has done yeoman's work to get KU where they are. But I am sure that he is as glad as anyone that they won.

I was hoping Vick would have a great game - since zone defense always seems to bring out the best in him. I was not disappointed.

I agree with Terrance - that I wish Mitch could have seen even a minute of time, but then I realize how ridiculous it is to question HOF HCBS.

I have long thought that winning the big games in the NCAA is so mental, and that it requires big doses of both luck and skill. HCBS shows off his crazy good coaching by winning the league, not just more than any other school, but more than every other school. But he blows my mind when he takes an atypical group of dudes, further limited by injuries and eligibility issues and somehow wins the league, the league tourney and gets to the final four. Talk about unbelievable, HOF HCBS is unbelievable.