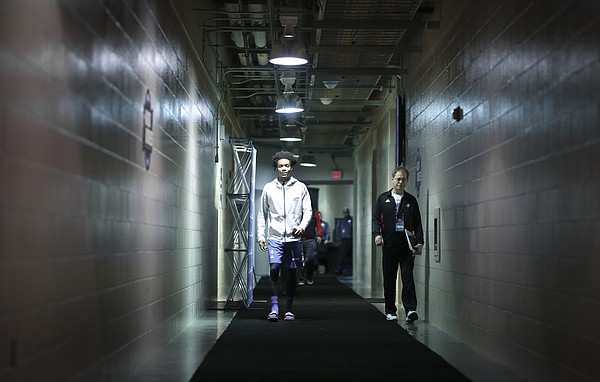 Kansas guard Devonte' Graham heads down a hallway to the team locker room during a day of practices and press conferences on Thursday, March 22, 2018 at CenturyLink Center in Omaha, Neb. by Nick Krug

Omaha, Neb. — Preparation is everything this time of year. That, and your matchup, can be the difference between advancing to play another game or going home until next season.

Few teams left in the field know this quite as well as Kansas, which features three upperclassmen who have played a ton of NCAA Tournament games during the past few seasons in Devonte' Graham, Svi Mykhailiuk and Lagerald Vick.

Because those guys have been here before, on this big and bright NCAA Tournament stage, — 12 games apiece for Graham and Mykhailiuk and a few less for Vick — the ins and outs of everything it takes to get from one round to the next is almost second nature by this point.

That past experience provides Graham with the ability to worry as much about making his teammates comfortable as he does himself. And that has proven to be big for this group both in the first couple of rounds and this week in Omaha.

That has been especially important for KU's younger guys, four of whom have been playing in the NCAA Tournament for the first time in Malik Newman, Marcus Garrett, Silvio De Sousa and Udoka Azubuike.

“The guys who haven't been here before, you can just see the excitement on their face just being here,” said Graham, who will lead the top-seeded Jayhawks into battle at 6:07 p.m. tonight against fifth-seeded Clemson in the Sweet 16 at CenturyLink Center. “Growing up, it's our dream to come and play in these games. And once you're living in the moment, it's a reality check. You gotta just -- you're just happy that you're here, anxious to play, and so you want to do everything you can for your team to win.”

For Kansas, that primarily means sticking to the things that have worked all season. And, in the end, it is still about basketball. Scouting reports matter the most. And things like effort, intensity, intelligence all can make the difference between a winning play and a back-breaking moment.

“You just have to focus on the little details and things like that and that kind of makes it easy,” said Newman of keeping one's poise despite the overwhelming excitement of playing in the NCAA Tournament, and, more specifically, the Sweet 16, for the first time. “We definitely feel prepared. We worked our butts off all year to get here.”

Because of that, Graham, whom Self has called the best leader he's had at Kansas, said he keeps his influence as much on basketball-type things as anything else.

“The young guys whose first time is here, they know it and they know they've got to be amped up and ready to play,” Graham said. “There shouldn't be no reason why you're not excited. You always dream about this as a kid and you've got to come out and put your heart on the line.”

That approach has worked well for the Jayhawks during the past couple of weeks. And with that recent success fresh in their minds, there's no reason to think the Jayhawks will start to approach things any differently from this point on.

Self won't allow it. And Graham will make sure of it.

“I think it's every coach's dream to have somebody on there that can be an extension of you and an extension of the staff. And Devonte' is certainly that,” Self said. “It's hard to lead, be a great leader unless you've got talent, too. And so everybody listens to him. Everybody listens. He has a unique way of getting his message to everybody without talking down to anybody. And it's always "we." We need to do this. … He's a terrific player. But his intangibles (are) what make him, you know, special. And he certainly has more of those than anybody I've been around.”

Went back and watched KU vs Cuse game from Dec. And DG was UNCONSCIOUS in the second half. 35 points. He just went off! Hope he shoots like that tonight!

hope Graham, Svi and Malik shoot like they can the next 3 games!