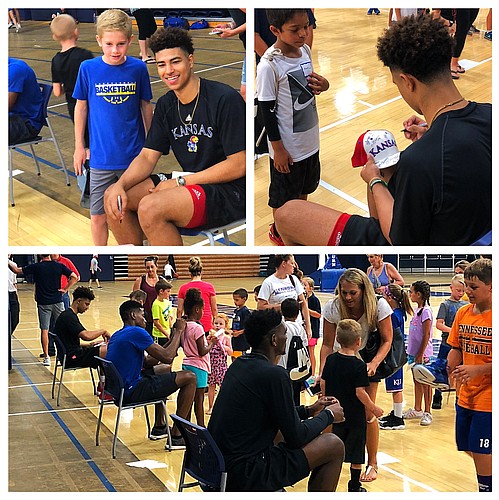 After his two-plus weeks with Kansas coach Bill Self and the U18 USA Basketball team earlier this month delayed his arrival in Lawrence, KU freshman Quentin Grimes finally has been able to get a taste of life as a Jayhawk.

Grimes, who earned MVP honors while helping lead Team USA to a gold medal at the FIBA Americas earlier this month in Canada, has been in Lawrence for a little over a week and is just now starting to feel settled.

Despite the five-star combo guard’s willingness and desire to jump right in on Day 1, KU coach Bill Self recommended — or is it required? — that Grimes take some time off before diving in to KU’s summer workout program.

“He wanted me to take off a full week,” Grimes said on Tuesday during a break at Washburn basketball camp. “But I only took off three of four days. I feel like I’ll be pretty recharged and then we have a couple days off for July 4th, so I’ll be good for sure.”

While jumping in with the Jayhawks has been something Grimes has thought about and looked forward to since signing last November, the 6-foot-5, 180-pound guard, who looks bigger than both of those measurements in person, said he enjoyed the chance to get his feet under him during the past week.

“My room’s all good now and I’m getting adjusted to my classes,” he said. “Things are going pretty good. It’s been good to just work out with the guys.”

Those workouts have been mixed into several nights in the gym working on his shot and even a couple of team pick-up games.

While Grimes said he expected things to reach an even higher level when KU coach Bill Self and his staff can work with the Jayhawks on a full-time basis, the freshman from The Woodlands, Texas, said the talent and depth of KU’s entire roster has stood out big time during his first week on campus.

“Just the intensity that we have,” he said. “Every day we have to go super hard. Nothing but 110 percent every day we’re out there on the court and in the weight room.”

Monday marked Grimes’ first time playing with fellow-freshman Devon Dotson, a 6-1 point guard from Charlotte, who arrived at KU in early June, and the Team USA MVP said the two newcomers had clear chemistry right away.

“I played with him at McDonald’s (All-American Game), but (Monday was) the first time here at Kansas,” Grimes said. “I think it’s good because we can both play on the ball and off the ball. So once coach kind of starts to figure us out he’ll put us in really good positions on the court.”

At this point, positioning himself to be the best weapon he can be for Self and the Jayhawks this winter is all Grimes is concerned about.

A major emphasis for Grimes right now is getting used to workouts and the routine at Kansas and becoming a more consistent shooter.

“I’ve worked on that a lot,” he said, noting that KU assistant coach Kurtis Townsend already has offered a few tips on his release. “My thumb was in the way of the ball a little bit, but they feel like my mechanics and everything (are) good, I just have to get my thumb out of the way of the ball.

“It’ll probably take a couple weeks or something, but as long as you get the reps in you’ll be fine.”

Because of his Team USA commitment, Grimes, who has his gold medal in his room at McCarthy Hall, may have some catching up to do at KU. But he also got a head start that his new teammates did not, learning from and bonding with Self in a competitive setting.

Grimes said a lot of what he learned and did in Colorado Springs and Canada would carry over to Kansas and added that the opportunity to be around Self morning, noon and night was invaluable.

“I feel like we’ve been bonding this whole time,” Grimes said. “At USA you see him the whole day, traveling with him and seeing him throughout the day is really fun because of the little things you get to know about him. (And here), it’s actually pretty similar, the kind of shooting drills that we did, 5-on-5, understanding how to play within his style.”

There’s a lot of that still ahead and Grimes believes he will become more and more comfortable as the days pass. Getting there as soon as possible will be important so Grimes can get the most out of his first year at KU.

After all, if the mock drafts that currently have Grimes listed as a Top 10 pick in 2019 are correct, the 2018-19 season could be his only one with the program.

Not that Grimes himself is worried about life beyond Kansas at this point.

“Yeah, I see that,” he said. “But you try not to pay too much attention to any of that because you could fall at any time. You really have to keep on improving every day.”

I know it's all a part of the business these days but I wish these mock drafts were stuck somewhere the sun doesn't shine. These kids haven't even played a second of college basketball and they already have all these expectations put on them, and if it takes some of them longer to adjust then they get hammered and labeled overrated or a bust, by the same people who hyped them up to begin with. Just let them be student athletes and see how they progress before putting all this on them.

What you are saying makes sense but won't happen. Media is something players need to accept and not get too excited. Changes can and do happen.

I look at it simply as a way to keep talking basketball during the off-season. It's all conjecture so don't take anything too seriously.

You have to believe that Grimes has solidified himself as the starting two guard. Winning the MVP at the18 and under in international play proved that the hype was real.

There is going to be strong competition at both the preseason BIG12 newcomer of the year and then the postseason MVP as well as several other BIG12 categories and NCAA awards.