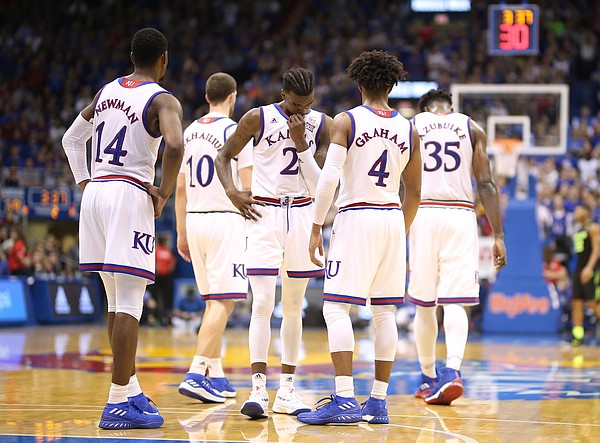 The Jayhawks try to pull it together during the second half, Saturday, Jan. 20, 2018 at Allen Fieldhouse. by Nick Krug

Malik Newman was terrific and the Jayhawks got to the free throw line 34 times. The problem was, they missed 13 times when they got there and finished with a 40.4 percent shooting clip after starting the game by making the first seven shots they attempted. Had it not been for Newman's superb effort, both early and late, this easily would've been in the low C range.

There should probably be some kind of compete factor in this grade from now on because even though the Jayhawks are only taking baby steps toward becoming better defenders, they are becoming much better at competing and grinding out possessions, which means almost just as much. KU limited BU to 30 percent shooting in the first half and 40 percent for the game. But the Jayhawks also fell asleep in the second half and let Baylor turn a 13-point deficit into a six-point lead. Some big stops when they had to have them were huge, though, and kept this grade above average.

Udoka Azubuike was merely OK but not great given his 4-of-11 shooting night from the free throw line. And Mitch Lightfoot and Silvio De Sousa gave the Jayahwks very little off the bench. Bonus points here for KU at least gaining some closure in the Billy Preston situation, even if it was not the closure it wanted. At least now KU will know definitively what it's big man rotation will look like the rest of the way.

Newman was terrific and Devonte' Graham flirted with a triple-double despite a 3-of-10 shooting night. But Svi Mykhailiuk did not have his best night, Lagerald Vick continued to be quiet and Marcus Garrett's 3-of-8 showing at the free throw line was more troubling than Azubuike's 4-of-11 mark.

Garrett is one of those dudes who is absolutely competing his tail off right now. But his numbers are not matching his effort. And Lightfoot and De Sousa combined for just eight minutes, meaning (a) they weren't all that playable and (b) they didn't really do much when they were in there.

Garrett's 3pt form is not the ugliest, it's not pretty... defensively he's a stud. But boy, imagine if the coaching staff can turn him into another slasher. Or even start using him in a pick and roll situation. This guy has enough tools to become an effective scorer. If the staff knows how to groom him. Start from his hairdo...j/k...

I've seen him dunking in one of his HS highlights. He's got potential.

It'll be nice to analyze why Silvio was limited to only 2 minutes. What would help him to stay in a game longer. What could he have done differently? I can't recall whether those were all silly fouls.