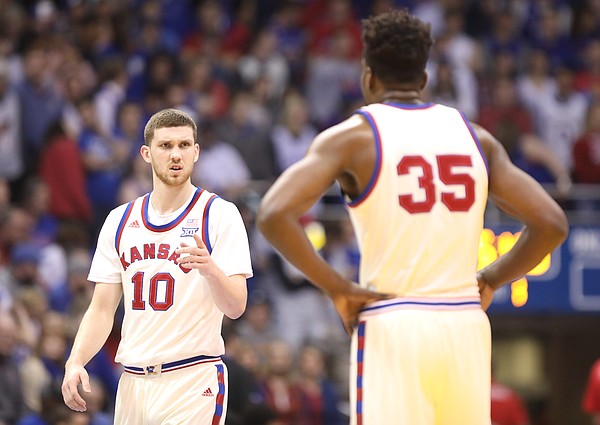 Kansas guard Sviatoslav Mykhailiuk (10) and Kansas center Udoka Azubuike (35) have a talk at half court during the first half, Saturday, Feb. 3, 2018 at Allen Fieldhouse. by Nick Krug

Quick grades for five aspects of KU’s 84-79 loss to Oklahoma State on Saturday at Allen Fieldhouse.

Despite reaching 79 points, it certainly was an off day for the Kansas offense. The Jayhawks made just one 3-pointer in the first half and struggled throughout the day from the outside and also turned it over 11 times, most of them coming as they tried to initiate offense while digging the first-half hole. A few late shots made the percentages respectable and KU certainly did not lose this one on the offensive end. But had the offense been its normal, 3-point shooting machine, KU may have had less of a hole to crawl out of.

After the loss, KU coach Bill Self said the team's first-shot defense was decent. Unfortunately for the Jayhawks, when you give back nearly half of the 30 shots the opponent misses, that's not going to show up in the box score. Beyond that, Kansas could not find a way to get the late stop it needed, allowing OSU to shoot 51.6 percent from the floor for the game and 44.4 percent from 3-point range.

Stop me if you've heard this one... Udoka Azubuike was great when he was out there, but too many silly fouls limited his minutes. Azubuike played just 21 minutes and grabbed 20 points on 8-of-11 shooting in that time. He snagged just five rebounds and also turned it over twice. There were plenty of effort plays on Azubuike's behalf. And his free throws, for the second game in a row, looked much better. But KU needs him to be more of a factor all over the stat sheet and not just in the points column.

Devonte' Graham and Svi Mykhaililuk (17 points apiece) did what they could, though neither player delivered a particularly solid game. And Malik Newman had one heck of an eight-point spurt in the second half en route to his 16-point total. But Lagerald Vick was nowhere to be found — 2-of-10 shooting, five points, three rebounds, three turnovers in 34 minutes — and Marcus Garrett's 14 minutes in relief were mostly quiet.

Mitch Lightfoot had a couple of moments, but was nothing like the player KU fans now know he can be. And Silvio De Sousa and Marcus Garrett didn't do much to affect this one.

You’re way more generous than I’d be today. D’s across the board..

Fair enough. I'm not a fan so emotion doesn't go into my grades and I know that can be tough to separate.

I always grade based on a C is average and then where were they from there... Three of the five grades here are below average marks and one is right at average.

Defense was an "F" minus. I think your sugar coating it to much.

OSU did NOT struggle to get virtually every shot they we're trying to. And when they did miss, they out hustled us to the ball, which to me was by far the most galling thing about what happened today.

This was essentially the ASU game all over. Difference is, we just lost serve in the conference race because we couldnt beat a 9 loss OSU team at home. I'll mention as well, after today, does anyone have ANY faith that we'll go down to Stillwater and win? I don't.

What a brutally disappointment of a loss.

I don't think I'm sugar-coating it, at least not intentionally. Self said the first shot D was good. That has to mean something. Beyond that, I thought Oklahoma State hit a ton of really tough shots. They got a bunch of easy ones, too, but they drained some shots that a lot of teams/players wouldn't make. Instead of trashing the D for that sometimes you just have to tip your cap.

We can agree that the defensive performance was not good, and a C- indicates below average. I think that's fair. To each his own, though.

No problem. I'd just say this was the worst defense we've played since the ASU game. And im not sure of what you graded that games "D". I would say today was comparable.

Good call. That game was a D. Obviously, I thought this was slightly better than that in that KU did come back and make it close at the end and OSU did make some really tough shots/plays late. Against ASU, the Sun Devils got whatever they wanted, whenever they wanted it in that second half, which included tons of layups right at the rim.

This team is so up and down it's infuriating, play so we'll Monday in Manhattan and then come out today and put forth this pathetic effort. I hear these guys talk about coming out with more energy at home every week like they do on the road and then they come out and can't even dribble or hand off the ball without turning it over, and for God's sake somebody put out some effort to rebound. I was so disgusted with the rebounding effort I quit watching the game, come on guys.

put me in the group that doesn't think anything the team did today is even close to average c .....d's and f's.......with effort being the lowest grade

Understood. It's so hard to overlook the fact that, while this is a team, it is still made up of a collection of players.

The reason I say that is because I would grade Graham and Mykhailiuk both very high in the "effort" category. Both guys played their butts off, even if they didn't shoot it or play all that well.

But that's just my methodology and one way of doing it.

So, for me, the offense had its struggles. I thought there was too much forced offense rather than playmaking. Defense, I though was OK, except for defensive rebounding. I remember two plays in particular where OSU rebounded its own miss under the basket, and the KU players stood and watched. Both times the OSU player seemed confused that no-one was trying to rip the ball out of his hands, so he stood for a beat before dunking it. In addition to that, any time a team gets this many offensive rebounds (I think I read OSU rebounded half of its missed shots in the first half), well, that's a problem. I don't know if its effort, knowledge, or just getting out-played, but that is certainly a problem. So, I might give Defense an average grade, but I'd give rebounding a very bad grade. I know, one is part of the other, but in this case, I think you have to separate them.