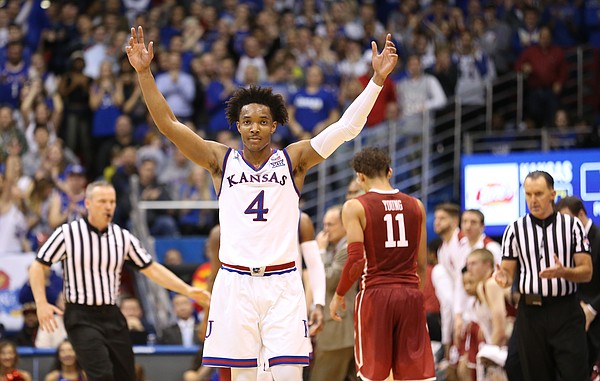 Kansas guard Devonte' Graham (4) raises up the Fieldhouse during a timeout in the second half, Monday, Feb. 19, 2018 at Allen Fieldhouse. by Nick Krug

Given his unselfish nature and constant team-first focus, it only seems fitting that, on a night when Kansas senior Devonte' Graham eclipsed a major milestone, the bulk of the talk after the game was about the minutes he did not play.

For the first time in 11 games, KU's point guard and sensational leader actually got a rest.

It came midway through the first half, when Graham sat for exactly three minutes of game clock — thus ending a streak of 10 consecutive 40-minute games — and, according to KU coach Bill Self, would not have come had Oklahoma point guard Trae Young not gone to the bench first.

That was Self's plan for dealing with Young when these two teams met in Norman, Oklahoma in late January — Graham guards him until he sits and Graham sits when he does — and it was the plan again on Monday night. Only this time, Graham actually got that rest.

Asked about his first view of a game from the bench in 37 days, Graham admitted that sitting there watching instead of playing actually did feel a little strange.

“I haven’t watched a game from the sideline since I don’t know when, so definitely felt like, ‘What?’ ” Graham said with a sly grin after Monday's 104-74 victory over Oklahoma at Allen Fieldhouse. “It’s been like 10 games since I sat down. So yeah, it felt weird.”

That was about the only thing odd about Graham's game on Monday night, as the Jayhawks' leading scorer was sensational once again in leading his team to the welcomed rout of the Sooners and their national player of the year front-runner. 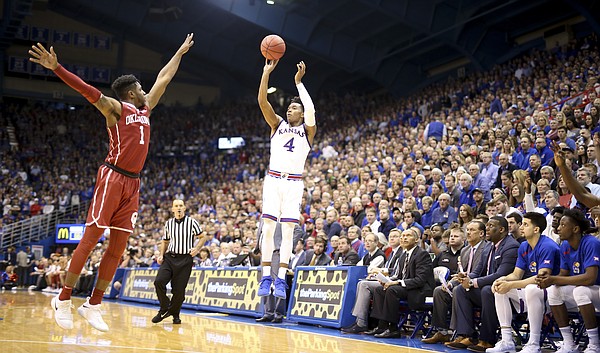 Kansas guard Devonte' Graham (4) puts up a three over Oklahoma guard Rashard Odomes (1) during the second half, Monday, Feb. 19, 2018 at Allen Fieldhouse. by Nick Krug

In outdueling Young, Graham poured in 23 points on 8-of-17 shooting and added seven assists, five rebounds and two steals in his 35 minutes on the floor.

Five of those eight makes came from behind the 3-point line, which moved Graham into second place on KU's all-time 3-point shooting list, with 270 career triples, one 3-pointer ahead of former KU bomber Billy Thomas, who held the spot, with 269, for the past 20 years.

“It was good to see him make shots,” Self said of his senior leader. “The first time we played them, I don’t remember exactly, but Devonte’ didn’t shoot it well at all (4 for 19 from the field, 1 for 9 from 3-point range). He took basically the same shots tonight, but everybody made a pretty decent percentage.”

Graham now sits 68 3-pointers behind KU's all-time leader, Jeff Boschee, and figures to stay there given the fact that his career is winding down.

Even if the Jayhawks go on to win the Big 12 Tournament and NCAA Touranment, Graham would need to average nearly six 3-pointers per game the rest of the season to pass Boschee.

Reaching 300 career 3-pointers seems more attainable and would require Graham to average three or four 3-pointers per game, depending on how many games the Jayhawks actually play the rest of the way.

Still, climbing all the way to the second rung on the ladder is a wildly impressive feat for a player who was headed to Appalachian State before the opportunity at Kansas presented itself.

Believe it or not, that percentage, if it holds, would be just the third best single-season showing of his impressive Kansas career.

He currently ranks second on this team in both makes and percentage to fellow-senior Svi Mykhailiuk, who has hit 88 of 196 on the season for a .446 clip.

Svi did not get quite the same opportunity for big minutes as Graham did early on in his career but is still climbing KU's 3-point ladder at a rapid rate himself.

Passing Thomas would require 60 more makes this season — just a little less than Graham would need to pass Boschee — but climbing into fourth place, ahead of Collins and Kirk Hinrich (236) certainly seems within reach for the young Ukrainian.

Talk about fitting. These two players who have been best friends, similar shooters and roommates throughout their KU career, could wind up in an awfully lofty position together on one of KU's most impressive all-time lists when it's all said and done.

And like Boschee and Thomas before them, there's a better than good chance that they'll both be staying there for quite a while, as well.

Devonte's score and work on Trae reminds me of the job he done on Buddy Hield down in Oklahoma. RCJH

I love this common mistake: .416 is not Graham's shooting percentage so far this year, but the decimal equivalent of it. If someone only made .416 percent of their shots, I doubt they would be playing much....

Thanks Mr. Librarian. I'm sure no one would have understood the article if you hadn't pointed that gem out.

This is exactly what I pointed out in my comment.

.416 is Graham's shooting percentage expressed as a decimal and the complete opposite of your statement. You mistakenly confused percent (%) with percentage. Matt was correct, though abbreviated.

Oops - the word choice is incorrect at .416 but correct elsewhere.

This is becoming painful.

Okay, this is why I did not major in math.

So wise. I told my wife when we were dating that it was an occupational hazard.

Sheeesh -- can we get back to sports please. We get it. You think you are smarter than Matt when it comes to decimals/math....congrats. Moving along...

saying .416 person is incorrect, but this is a blog... and honestly that usage is so commonplace in sports commentary nowadays that it's not worth arguing over.

If this were a "news" article rather than a blog then I would expect the correct usage. In a blog I couldn't care less.

Exactly -- the only thing worse than this is when the Mr. Blackwells drone on on here about uniforms....c'mooonnnn

How about we say Devonte took a lot of shots and made a bunch of 'em.

Can always rely on Tony to close the book on any debate. Boffo!

Devonte has been magnificent at KU and am thoroughly pleased for him. His future is extremely bright, and I hope that he achieves all of his dreams.

the boschee years sucked but he was fun to watch and even more fun to play as in the video game. I think we had an entire season where our only offense was for him to bring it down and shoot a 3.