Kansas vs. Villanova may look different this time, but Saturday's showdown features plenty of meaningful storylines 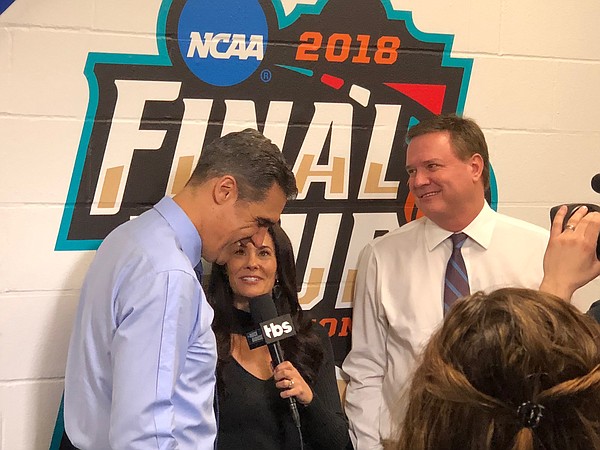 Kansas coach Bill Self and Villanova's Jay Wright during the pregame interview with CBS before last season's Final Four showdown in San Antonio. by Matt Tait

While most of Jayhawk Nation is billing Saturday’s 11 a.m. showdown with No. 17 Villanova at Allen Fieldhouse as a rematch of last year’s Final Four meeting in San Antonio, the Jayhawks themselves are viewing things much differently.

“I just see it as another game on the schedule,” said KU junior Dedric Lawson, who leads the team in scoring (19.1), rebounding (10.6) and assists (23) entering Saturday’s Top 20 clash. “I don’t put too much emphasis on who we’re playing this early. (Those games) don’t really mean much. But going forward, we just take all games the same.”

Sure, the matchup will be hyped up from coast to coast. And it deserves that kind of attention, regardless of the names on the floor. After all, Kansas and Villanova have been two of college basketball’s most successful and dominant programs during the past five years, with the Wildcats winning two national titles, single-handedly keeping Kansas from a chance to hoist its own trophy both times.

In 2016, Villanova ended KU’s run in the Elite Eight in Louisville, Ky., with a tough, 64-59, every-possession-matters type of game. It marked the final game of Perry Ellis’ Kansas career and the Wichita native finished with 4 points on 1-of-5 shooting, while Villanova went on to beat North Carolina in the national title game.

Last year, in the city where Bill Self and company claimed the title in 2008, the Wildcats went berserk from 3-point range, torching the nets for an NCAA record 18 3-pointers — on 40 attempts — with 13 of the makes coming during a first-half onslaught from which Kansas never recovered.

Two players who played meaningful minutes in that game will be on the floor for Kansas on Saturday, with Lagerald Vick (8 points in 32 minutes) and Marcus Garrett (scoreless in 18 minutes) both likely starting on Saturday.

Beyond that, with KU junior Udoka Azubuike out with an ankle injury, the Jayhawks have just two more players who even played in the game, and that came when Mitch Lightfoot and Chris Teahan checked in with the game well out of reach.

So Kansas returns 53 of the 200 minutes played in that game and Nova, through six players who got in, returns 96 of its 200 minutes, with Eric Paschall (24 points in 29 minutes) and Phil Booth (10 points, 6 assists in 32 minutes) representing the bulk of that returning experience.

That means names like Graham, Brunson, Mykhailiuk, Bridges, Newman and Spellman, along with Azubuike and De Sousa, of course, will not be anywhere near Saturday’s game.

And that makes it an interesting matchup unto itself.

Villanova enters at 8-2, with losses to Furman and Michigan. The Wolverines are as hot as any team in the country, and Furman, which stunned Nova at home, is now ranked No. 22 in the nation. Hardly a bad loss.

Kansas, of course, is back on top of the AP poll, sitting at No. 1 in the rankings and 8-0 on the schedule.

Despite the unbeaten record, Self continues to look for more from his team, and has said on more than one occasion that he does not believe this team has come anywhere close to playing a complete game yet.

“You can list the things we don’t do from a competitive and thinking standpoint, it’s just unbelievable,” the Kansas coach said after last weekend’s three-point win over New Mexico State. “... How in the world we’ve won these games (is beyond me). Certainly, it’s one thing to not play well, it’s another thing to not play well and then not be intellectually in the game.”

Kansas will have to do both on Saturday against a Villanova team that will be looking to validate its new existence, while also trying to follow up last year’s 95-79, Final Four win with yet another convincing victory over Kansas.

Nova coach Jay Wright has been tough on just about everybody he has faced over the years, but has fallen into rare company as one of the few coaches out there to have Self’s number during recent seasons.

The Wildcats have won three straight over the Jayhawks and are 4-2 against KU since Self took over. All six of those meetings featured Self against Wright, who now is in his 18th season at Villanova after seven successful years at Hofstra.

One final note of interest about Saturday’s game comes in from the Joe Cremo file.

You remember Cremo, don’t you?

The former University of Albany shooting guard, who was one of the hottest graduate transfers on the market last offseason, chose Villanova over Kansas after visiting KU while making his decision.

After averaging 17.8 points per game for Albany during the 2017-18 season — along with 4.1 rebounds and 3.8 assists — the former first team all-America East Conference selection is averaging 21 minutes per game for Villanova and has made one start while playing in all 10 games for Nova so far.

Cremo is averaging 7 points and 2 rebounds per game and is second on the team in 3-point shooting, firing at a 46 percent clip (17-of-37) so far this season.

Oh, and then there's the fact that longtime KU recruit Jeremiah Robinson-Earl just recently picked Villanova over Kansas, too. I doubt Robinson-Earl will be in the Fieldhouse on Saturday, but his is just one of the many storylines surrounding Saturday's game.

This one's going to be fun.

For more on this week's matchup and why Villanova has had KU's number of late, be sure to check out our latest KU Sports Hour podcast that dives deep on all things KU-Nova.

I haven't wanted a non-conference win this badly in idk how long...

I hope we beat their A hard.

with Dok id say KU wins easily ..but they have struggled so much with teams that should be dominating..even when they had him....I hope KU gets out to a massive lead and the game is never in doubt..but I give Nova a good chance in this one...unfortunately ..it does feel like the KU fan base needs this..not very often any one team beats them with regularity, especially when it really matters

This article was apparently written before Nova loss to Penn Tuesday evening? Or was that just a lack of research/updates?

Certainly takes some of the luster off the game with them already losing 3xs.

it may take some of the national luster off of the game, but I think it puts more pressure on it.

Here you have a 3 loss Nova team that is better than their record and desperate for a signature win against an undefeated and #1 ranked Kansas team that has not looked worthy of their ranking despite the spotless record.

I don't get a warm and fuzzy feeling about this.

Jay will hand Bill the clown suit before the game.