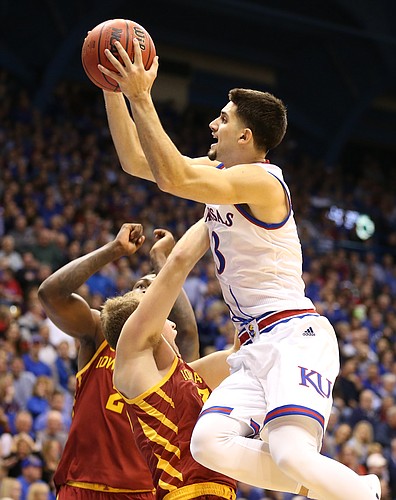 Kansas guard Sam Cunliffe (3) elevates into Iowa State forward Hans Brase (30) on a charge during the first half, Tuesday, Jan. 9, 2018 at Allen Fieldhouse. by Nick Krug

In the end, the right fit won out over the chance to finish his career closer to his hometown of Seattle.

Either way, former Kansas guard Sam Cunliffe on Tuesday announced via Twitter that he was headed to Evansville, where he will sit out the 2018-19 season and have two years of eligibility remaining following his redshirt season.

“Thank you Jesus for this opportunity,” Cunliffe Tweeted above a photoshopped image of his back in an Evansville jersey with the Purple Aces’ logo at the top of the image as the centerpiece in the phrase, “Be A Legend.”

Cunliffe, who visited Xavier over the weekend and also considered Grand Canyon, Pepperdine, Washington, Fresno State, Minnesota and others, told the Journal-World over the weekend that “this Evansville thing is a lot better than some might think.”

Led by former Kentucky great Walter McCarty, who enjoyed a 10-year NBA career — most of it coming with the Boston Celtics — Evansville is coming off of a 17-15 season that ended with a loss to Northern Iowa in the opening round of the Missouri Valley Conference postseason tournament.

Cunliffe’s addition gives the Purple Aces a full roster of 13 scholarship players and the former Top 40 prep prospect who transferred to Kansas from Arizona State will be joined at Evansville by fellow transfer Artur Labinowicz, a 6-foot-4 guard who played the past two seasons at Coastal Carolina and will join Cunliffe in sitting out during the upcoming season.

Thank you Jesus for this opportunity #legendary pic.twitter.com/M0d44LniK7

Evansville?!!! He averaged 10 ppg, 40% 3pt shooting, 25 mins as a FRESHMAN at Arizona State, a school that absolutely whipped KU in Allen Fieldhouse last year. Again, I repeat, Evansville?!! I feel really bad for this kid. Seems he would have been much better off just staying at ASU. Now he won't even get to play 4 years of college bball.

He was only there during first semester. He put up those numbers before conference play and against poor competition. By the way Evansville has a fairly rich tradition. The won the college division (back before the days of NCAA Div I, II or III) in 1959, 1960, 1964, 1965 and 1971. Times have been a little tougher since joining the NCAA Div I.

Isn't Evansville also where Larry Bird played? They do like their hoops in that state.

No Larry Bird finished at Indiana State after starting at Indiana.

Evansville will be forever known in my head as the school that had sleeves on their jerseys. Looked like they were playing ball in t-shirts.

With only 2 years left to play college ball it makes sense to me for him to seek a place where he can get on the floor. This kid has some serious athleticism that may carry him there but could not here. He needs playing time. Makes perfect sense to me. You can refine your skill set anywhere there is decent competition.

and Missouri Valley is a top notch mid major conference that does get pretty good TV coverage. Not as good once was with Wichita state, Creighton, and Valpo gone though

So much for his claim of wanting to play closer to home. Pffftttttt

this is a curious choice..Washington would have been a much better option..not because UW is a better program than Evansville, but because he at least gets to play Power 5 level competition and gains much better exposure..but I guess at Evansville he might be "the man" simply because he transferred from Kansas..I wish the kid well..unless you he plays us..in which I hope he has the worst game of his college career