Breaking down Malik Newman's chances in the NBA 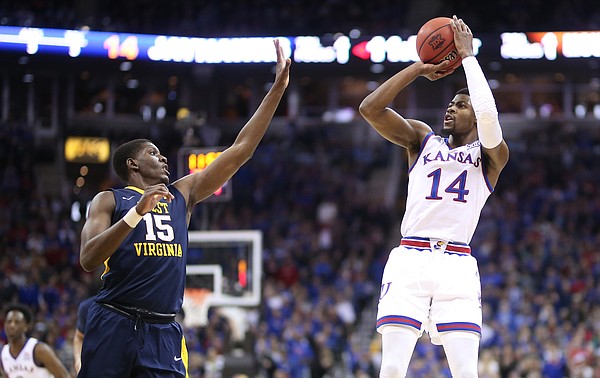 Kansas guard Malik Newman (14) pulls up for a shot against West Virginia forward Lamont West (15) during the first half, Saturday, March 10, 2018 at Sprint Center in Kansas City, Mo. by Nick Krug

Now that we know for sure that KU sophomore Malik Newman is leaving school and headed to the NBA, it's time to take a quick look at his chances at the next level.

Kansas coach Bill Self said throughout Newman's time as a Jayhawk that he was a prototypical 2 guard, with the skill set needed to play that spot and no other. That certainly showed throughout his one season on the floor, but one of the best things about Newman's time at Kansas was that it appeared as if he continued to get better week after week.

Some of that improvement may have been hard to see because of the enormous expectations placed on Newman from opening day on, but I think a big part of his season was about progress and moving forward to the point where he was finally comfortable with his game and how it fit into the way Self and Kansas basketball operate.

Obviously, that moment of comfort came during the postseason, when Newman was sensational and played the best ball of his college career.

While those skills that he showed in the Big 12 tournament and the NCAA Tournament certainly were present within him before that point, his ability to unleash them on the biggest stage and with such consistency will be what ends up getting him drafted.

Everybody that thinks they belong in the NBA has basketball skills. You don't even get to knock on the door if you don't. But what the NBA folks like to see is those skills put on display in adverse situations and few players this past month showed that off better than Newman.

That, to me, is the reason he gets drafted and gets a legit shot at making his NBA dream a reality.

The guess here is that Newman will end up going in the early to middle part of the second round. Maybe in the 38-45 range.

That could easily change, of course — for better or worse — based on what Newman does and shows at the NBA Scouting Combine May 16-20 in Brooklyn. But it seems like that's a pretty good range for him to fall in unless he just absolutely tears it up at the combine.

Here's a quick look at the bottom-line skills that should get Newman drafted.

• Shooting ability — As one of KU's best 3-point shooters all season, but particularly in March, Newman has shown an ability to knock down shots of all kinds. His 3-pointers made the biggest splashes for KU, but those mid-range pull-up jumpers he took — and pretty much hit every time — are NBA shots and his ability to get up shots quickly off of his own dribble sure looked like pro moves, as well. I don't know if Newman will be as effective driving the ball to the rim as he was down the stretch for Kansas, but don't bet against it. He might not look like the strongest dude on the planet, but his strength played a huge role in him both getting into the paint and finishing at the rim when he got there.

• Rebounding — Newman, at 6-3, 190 pounds, finished as KU's second leading rebounder for the entire season at 5 boards per game and 197 for the season. While it might be hard to see him carrying that over in the bigger, stronger NBA, his ability to do it in college shows something to the pro scouts and that's that Newman is the type of player who is willing to find other ways to impact a game on a night when he might not be shooting the ball that well. Make no mistake about it, he'll either make it or not in the NBA based on his ability as a scorer, but sometimes, like a good special teams player in football, you need to find that other area to make an impact in order to give yourself a chance to find your footing. And if Newman can get on the glass with his next team the way he did during the second half of the season for Kansas, he'll give himself every opportunity to stick and allow his offense time to get comfortable and come around.

• Attitude — It's a small thing and doesn't always play that big of a role when you're talking about the best players in the world, but Malik Newman's mind is right where it needs to be to make this jump. For months after finally becoming eligible at Kansas, Newman wore heavy criticism from fans and analysts who had huge expectations for him and his season. And for months, Newman quietly wore it, continued to work hard and, most importantly, continued to carry himself with that fun-loving spirit that made him fun to be around. It might have been obvious on the court when Newman was struggling, but he never carried that with him off the court. And that's not an easy thing to do. Credit his teammates and coaches for helping him keep his head right, but most of the credit goes to Newman himself, who simply believed in himself too much to let a slump or a slow adjustment chip away at his confidence.

Here's the other quick thing about Newman's chances of making it in the NBA: He's still got plenty of time to get better.

Remember, a big part of the reason players leave school early is because they're willing to bet that, if given the time and resources to work on their game all day and all night, like the job that they hope it will become, they'll be able to make progress at a much faster rate than they would in college, where class, tutoring and time restrictions on practice all get in the way of major progress.

Newman has the framework to become an NBA player, but he'll only make a long career out of it if he remains confident, works on his flaws and strives to put in 10 times the amount of work he put in during his time at Kansas.

Leaving KU will afford him the opportunity to do so, and, knowing how much Newman loves the game, I can't imagine for a second that he'll do anything less.

He made us all proud with his rapid improvement after XMAS thru the NCAA tournament. I became most impressed with his quick step to the basket off the dribble. Malik showed excellent range and a very good fade away jumper over taller players. These are some of the talents exhibited by Frank Mason. Here's hoping you find a good team matchup to begin your dream.

You da man, Malik! Best of luck and hope you have a long, successful career. Don't forget to come back and school the young fellas in the offseasons.

I look at Wayne Selden as someone with a comparable game to Newman and as someone who has found success in the NBA. So much of making it in the NBA, however, seems to be about fit and luck. Selden may very well have become a G-League or international player had a couple of injuries not opened a starting spot on the Memphis roster a couple of years ago.

For my money - and this could be due to recency bias - I'm taking Malik Newman over Wayne Selden if I'm picking between the two to play the SG position.

Selden has a few inches of size and I think a bit more athleticism and finish at the rim potential than Malik showed. Although, when he learned to use his body to shield his shot better that improved (we were truly spoiled with Mason in that regard). Newman will have to be a better spot up shooter to succeed I think. But hopefully as you say he finds a good spot to thrive and grow.

I guess it only takes three weekends of good basketball to go pro these days? I dunno, he's probably right to leave, as he may not have as much name recognition in a year's time and could lose playing time to a potentially great incoming class, but I really doubt it. He would have been the veteran-guard leader we will need with a bunch of newcomers.

I'm sorry to see this, because I longed for him to become the Keith-Langford-esque player KU's been missing missing for a decade and a half. He's my favorite type of player to watch and easily would have been my favorite player next season.

I hope he lives up to his potential but am glad I decided to wait to buy a jersey with his name on it; he didn't spend the time to grow into K-Freeze's ever-changing shoes, but we will all remember him for winning the Big 12 Tournament and Elite 8 in 2018... though most honestly might forget if he doesn't make it in the NBA.

Good luck, Malik. We will certainly miss you next year.

Malik has that "alpha dog" mentality that will serve him well. He knows that he has to be aggressive to be successful because he won't dominate his position physically in the NBA.

Down the stretch, he wanted the ball, and that is one of the first signs of a competitor and champion. His overtime performance against Duke sealed the deal for me that he is a "take charge" kind of player.

Looking at Mason, I think Newman will do just fine. His ankle-breaking moves will keep him in the roster for a long time. He won't be able to drive to the hoop like Mason, but Malik provides enough threat outside. Defensively, though, he'll have to gain a lot of strength if he wants to compete. Anyway, I'm very hopeful that Newman will succeed in the league. Rock Chalk!!!