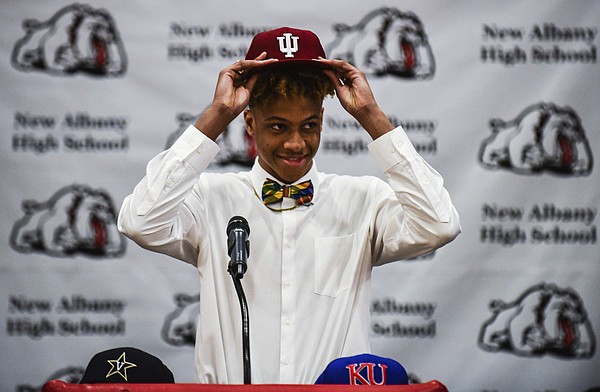 Romeo Langford places an Indiana University cap onto his head after selecting to continue his basketball career with the Hoosiers on Monday at New Albany High School, Monday, April 30, 2018, in New Albany, Ind. by Tyler Stewart/News and Tribune via AP

The recruitment of five-star guard Romeo Langford ended right where most people expected it would — with the star of the Hoosier State committing to the Hoosiers.

Monday night, in front of more than 80 credentialed media members and a jam-packed high school gymnasium buzzing with anticipation, five-star guard Romeo Langford picked up a red Indiana Hoosiers hat, placed it on his head and ended one of the most high-profile recruitments of the decade.

After thanking a laundry list of people who helped him reach that moment in his life, Langford said simply, “With that being said, I will continue my education and basketball career at... [long pause as he placed the hat on his head] Indiana University.”

With that, the place went wild and all of those rabid Hoosiers fans who showed up to the public announcement rejoiced over landing the No. 5-ranked player in the 2018 recruiting class, Indiana's Mr. Basketball, a player who many believe can single-handedly expedite Indiana's rebuilding project under head coach Archie Miller.

Left sitting on the podium in front of Langford were Kansas and Vanderbilt hats, representatives of the two programs that came oh-so-close to bringing the Hoosier hero to their campuses.

Instead, the pull of staying home and playing out a college career in front of a state full of people who already adore him proved to be too much for any other program to overcome.

The 6-foot-5 wing who has been described as “a bucket getter,” likely would have been pencilled in as a starter at Kansas.

Some speculated that Langford waited so long to make his decision because he wanted to see what would happen with KU's roster. And after both Malik Newman and Lagerald Vick elected to leave school early — making it all four of KU's starting guards departing before next season — that fueled the belief, at least locally, that Langford could pick KU.

Ultimately, it came down to his desire to help rebuild Indiana into the national powerhouse it once was while doing it in front of a state full of adoring fans who have been just as active as the IU coaching staff in recruiting Langford to stay home.

Langford's decision leaves KU with one open scholarship still to hand out before the 2018-19 season arrives and, according to ESPN's Jeff Goodman, the Jayhawks will host Albany graduate transfer Joe Cremo for an official visit this weekend.

The shooting guard from Scotia, N.Y., played 35.2 minutes per game this season and shot 48.5 percent from 3-point range.

Cremo likely is not the only Plan B option for the Jayhawks to fill that final spot, but, because of his ability to shoot the ball, he has to be considered one of the more intriguing options.

As for the rest of KU's 2018 class, it remains one of the Top 5 or 6 classes in the country, with five-star guards Devon Dotson and Quentin Grimes expected to step in and compete for starting spots, four-star big man David McCormack adding depth and insurance inside in the form of someone who truly embraces a center's role and three-star local prospect Ochai Agbaji, of Oak Park High in Kansas City, Mo., coming in as the wild card of the class.

Looks like another problem that we didn't need. We will miss Newman but maybe someone will step up.

They're kids, so I don't make more out of it than is necessary. From what I've heard Romeo is a great kid, but he might regret this decision.

So, it is apparent that the KU coaching staff doesn't know what they're doing when it comes to recruiting, and KU is better off Langford didn't pick our school? I guess folks are upset the coaches screwed up and recruited Wiggins, Embiid, Jackson and others! Their record would be sooo much better had those OAD's not come to KU!

I completely agree with the point you're making, and I love Wiggins and Embiid, but the year with them is actually one Self's worst years for W/L (along with the following year).

Your correct, but in fairness KU schedule that year had to be Self's most difficult in 15 years with 6 incoming Freshman.

no ill feelings for an in state choice. it does raise the question of high school coaching. let's say adidas decides to donate some gym equipment / high school side money to develop kids in state. I guess aau is legal right now but same difference right?

We expect local players to stay home so his decision to play at Indiana is not unusual. Kansas often is listed as a school to be considered. Makes the list prestige bound. Vick said he wasn't going agent wise. Might he reconsider playing again at KU? DeSousa eligibility might need review. Udoka even though might not be ready but remember potential plays a big part. The Cremo from Albany might be coming and maybe an unknown will show up.

Good luck young man. Wish you would have made the choice to make a run for the National Championship at KU, but no ill will for choosing to stay in Indiana for one year.

Sorry, I can't help but chuckle a little at the young man's comment, "I will continue my education...at Indiana University."

It's the Harvard of....uhhh, I guess Bloomington? Not even the best school in the region of the state.

Clarification: This is NOT a slight at I.U.

It would've been nice to have him, but I think we'll be just fine without him.

I am a KU fan who lives in Indiana about halfway between Bloomington and New Albany. I understand everyone is granted their opinion, but I would like to provide some additional information about this young man. What you saw in this announcement was a young man who is so well-liked in his community and his school, he wanted to share this experience with everyone he could. He is an outstanding academic student, not "just" an athlete. I have worked youth basketball tournaments, from 4th grade to high school age, where this young man took time out of his day to visit, take pictures and talk with players and teams. This is no Ball family circus and Romeo and his parents should not even be mentioned in the same discussion. ANY program should be considered lucky to have a young man, be he a one-and-done or not, be part of the team.

Aww, Don...don't take it personally. Every vineyard has a few sour grapes. I'm sure if he had committed to Kansas, he would have been considered the finest young man to come out of Indiana since John Mellencamp.

At least he didn't do the old bait and switch BS with the hats, although the whole hat thing is kind of BS already.

Don, I also live in Indiana and agree with you 100%. It is too bad we could not have gotten him to come to KU! He is an outstanding athlete (maybe as good as anyone on our present roster) and representative of his community and goes out of his way to meet with his fans and is a very good student. His family are well grounded and we would not have gotten our now too often "player with issues" like we have had so many times recently! (Preston, Bragg, Jackson ect). The TV stations in Indy said last night that Romeo changed his mind from one school to Indiana over the past month or two. Which lead me to wonder whether our FBI issues had something to do about his change of mind? Sure hope we come up with a good explaination on what to say to upcoming recruits about what is going on so we do not loose any more kids the caliber of Romeo.

His dad had some interesting things to say about KU in regards to the FBI investigation...

Kansas, it pushed it out for me. Just having that name on your school. I didn't take them out of the three verbally, but in my mind we just didn't want him going there and anybody asking him that type of question. So we don't want him going to school there, we don't care how good the basketball is.