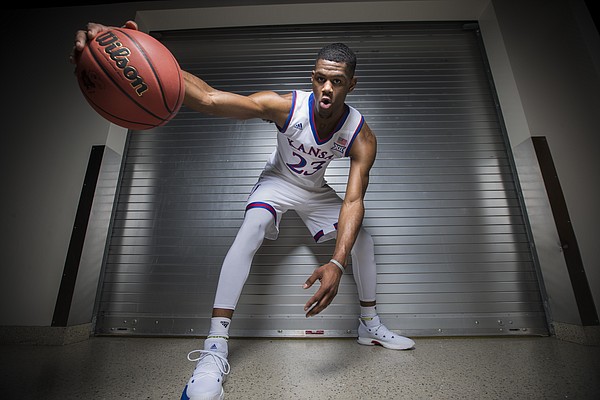 Next up: Freshman forward Billy Preston:

Although Preston never played in an actual game for the Jayhawks, we did have the pleasure of watching him in six exhibition games, which, at varying points, only showed us glimpses of what could have been.

Preston averaged 15 minutes a game in the three games he played for KU in Italy — including one start — and looked good at times and young at others.

Things changed a bit back in the States, as Preston averaged the same number of minutes per game in KU's three preseason exhibition games but also scored in double figures each time out, shooting 14-of-16 from the floor in wins over Missouri, Pitt State and Fort Hays State.

Although they'll never show up in any history books, Preston's final numbers as a Jayhawk went like this: 9.2 points and four rebounds per game on 61 percent shooting in 15 minutes per outing. And that all came before Preston really had much time to get comfortable or work with KU's coaches.

No one's crying over the way things went down, especially given the fact that Preston went overseas and got paid and KU went on to the Final Four. But his name will likely forever be associated with the phrase, “What could have been.”

He Will: Frustrate the Kansas coaches for most, if not all, of the 2017-18 season – My guess here was that Preston would be one of those players with enormous potential but trouble getting it and understanding how to consistently play hard and give the kind of effort the coaches demand from all of their players. That, in itself, would have been frustrating. What went down instead was a whole different level of frustration, with both the KU coaches and Preston's teammates, not to mention Preston himself, kept in limbo for months over his eligibility and whether they would ever get him back. They didn't, of course, and all parties involved deserve some major credit for keeping the whole situation from being the huge distraction it could have been.

He Won't: Stop working to try and improve – There's no doubt that this one was spot on. And give credit to Preston for that. For weeks, the guy's only game day came in the shoot-around portion of KU's games. And, for weeks, Preston continually went hard and always had by far the biggest sweat going after those pre-game shoot-arounds. And that's to say nothing of the effort he put in during practices, both as a member of KU's red team that helped pushed the starters and during those times when they thought they were close to getting him back and were trying to work him into the rotation.

He Might: Figure it all out by Big 12 play and be the X Factor for this KU team – Perhaps “He Might Have” would have been the better way to put this one. There's no doubt that getting Preston back, at any point in the season but particularly at the start of Big 12 play, would have been a huge lift for the Jayhawks. But it did not happen and his opportunity to become any kind of factor, X or otherwise, never arrived.

My overall prediction grade for this one: 2.5 out of 3. I won't take full credit for these because they weren't all exactly right. But it's wild to look at how close they were even though I was talking about him playing and that never happened.

In case you missed the other preseason predictions revisited:

• Billy Preston's mom opens up on situation involving her son

• Tom Keegan: Billy Preston and Michael Porter Jr., foes for a day, friends the rest of the way

Just a little off. If only he was a better driver.

actually glad he crashed..KU already has enough crap to worry about with DeSousa..dont need to worry about TWO guys possible getting benefits..least with Silvio we have a chance of escaping vacating wins..with Preston playing it would have been a sure thing

He curbed his enthusiasm - AND his Dodge Charger!

Don't all of you wonder that if Billy had not wrecked his car, no one would have suspected anything wrong until it was too late.His eligibility issues would have covered the first half of the season and Silvio's may have covered the second half thus only a handful of wins for KU in 2017-18;

Note: Updated stats, KU is 12 victories behind UK and 12 victories ahead of NC for total program victories. We cut into Kentucky's lead and maintained our own lead over Carolina.

KU will hopefully keep chipping away and eventually take the #1 position in total program wins!

If Preston had been eligible, we might not have gotten to the Final Four. None of Bill Self's Final Four teams had 1&D's playing on them.

Preston will be the 1st Jayhawk taken and maybe the only 1st rounder.